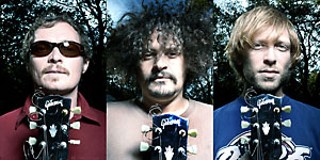 There are dimensions of the mind that only music and a handful of pills can unlock: the dark side of the moon, an octopus' garden in the shade, a stairway to heaven. One improvised jam at a time, Austin metal trio Tia Carrera follows its muse into a surrealistic terrain where each chord progression represents another possible path. Yet it's not about the destination but rather a bleeding of the colors – the spontaneity and creativity aroused in this portal of the moment.

"The experience lets your mind wander," ventures the group's guitarist, Jason Morales. "It doesn't give you a lot to grasp on to, so you have to create your own meaning."

And it's not hit or miss. Instead, each member hits it twice, passes it to the left, returns to the tonic, drags on the root, and unleashes "Morales Riff No. Four Hundred Twenty." As many a local hoot night has proven, from the Who to the Rolling Stones and the Beatles, the trio also has an uncanny ability to reinterpret the past, exploring the voids left in the wake of rock & roll's forefathers.

Behold Tia's telepathic trinity, then. Bassist Andrew Duplantis has backed everyone from Son Volt and Jon Dee Graham to the Meat Puppets and Bob Mould, while his rootsy venture with the Unfaithfuls continues to leave audiences Colorblind. Erik Conn, who also handles the sticks for Those Peabodys and Migas (with Morales), is the centrical force driving Carrera. Morales, meanwhile, like J Mascis before him, is a drummer turned guitar god who specializes in psychedelic sludge.

In the wake of Tia Carrera's new self-titled disc on Australian Cattle God, seven jams recorded at Cacophony Recorders and the Launch Pad over the past two years, and the group's return from the CMJ Music Marathon in New York City, the Chronicle engaged Morales in an e-mail dialogue about an album that influenced the band's sessions. His choice? The Melvins' copyright-infringing, 1991 classic, Lysol, subsequently re-released as The Melvins. The epic, one song, six-part album practically birthed stoner and drone metal in a mere 30 minutes. It remains, arguably, the band's heaviest work to date.

In retrospect, the connection is obvious. For one, there's Morales' thick black 'fro, which recalls the Melvins' King Buzzo. Then there's the lone Native American warrior basking in the sun on the cover of Lysol, his remains resurrected 15 years later for Tia Carrera's artwork. Perhaps it's the "Second Coming" Lysol once prophesied. Oh yeah, and then there's the shared obsession with "Tone, Levels, and THC." Let it burn.

Austin Chronicle: I got into the Melvins a bit later than everyone else. My cousin, who moved to Seattle in 1991 to be a part of the whole Northwest music explosion, came down for Christmas one year with what he considered the best of the best for me to check out, and Lysol was one of those albums. Needless to say, it melted my face off. Do you remember when you first got the record or what your initial reaction to it was?

Jason Morales: I don't remember what my initial reaction was when I first heard the album; I just knew it was dope! I had already been a Melvins fan since Gluey Porch Treatment, another one of my faves (if you haven't heard that one yet, you really need to), and Lysol took me back to the Gluey days right in the first track ("Hung Bunny") and the fact that it was all one track. I think it was the first time in their work where they were toying with their fans, which seems something that has lasted in their work since then.

AC: What is it about Lysol that's had a lasting influence on your work with Tia Carrera? What is it that makes it stand out from Bullhead, Houdini, and the four EPs (Eggnog, King Buzzo, Joe Preston, Dale Crover) that were also released around that same time?

JM: Tension. The way they make you wait in that first song, through the long, deep, heavy guitar chords, then a little bass, then the drums kick in. That, to me, was awesome. They make it last like 10 minutes!! Tia can be, well ... very long-winded, too, and I like to think that we create some of that same tension in our songs as the Melvins achieved with Lysol.

AC: I actually don't prefer listening to stoner metal when getting stoned, so I don't have any really interesting experiences to share regarding Lysol. Is this one of your choice albums when passing the bong or taking that quick hit before bed?

AC: In terms of relating Lysol to Tia Carrera, I hear a connection just in the fundamental tones of the music. Are you striving toward that same heaviness?

JM: It's always been a part of my guitar playing, even back in my old bands like Starfish and Hell Trout. That aspect really hit home to me, the idea of really slow metal.

AC: The way Lysol plays through as one 31-minute song broken into six movements seems fundamental to the way Tia Carrera rolls, especially on 2003's November Sessions where each song, like "Doom" for instance, has separate sections (1. The Riff, 2. The Four Open Six, 3. Hey! Do some drum intro thing, and maybe give us a yell). But more broadly, with the improvisational nature of Tia Carrera, all the music seems based on these changes in dynamics, these drastic differences between highs and lows. How did Lysol influence you on that level?

JM: Well, I think the Melvins really set the tone for this type of metal, as I mentioned before, the tension, the real heavy, slow riffs, the dynamics in their long epic songs, etc. It's just something I really like about them, and I think Erik, our drummer, digs the Melvins in that way, too. So, when it comes to us laying down some shit, it just comes naturally, and honestly the titles and all of that crap come last. We were just jammin' that day, and that's how it came out.

AC: Lysol is thick as brick. The first two movements, "Hung Bunny" and "Roman Bird Dog," are essentially nothing but feedback and drone, which I feel creates this really slow burning sensation. At times, you seem to do the same thing, just hold one note for a long time. Is that to create the same effect, or is it more of a technique to let the rest of the band catch up when jamming?

JM: A little of both. We definitely don't plan it that way. A lot of times it's because I'm trying to think of the next chord I want to go to. It's hard to choose that perfect chord in the middle of an improv metal jam, one that just takes the whole thing to the next level. And in doing that, we're creating this dramatic, intense moment. Everyone in the room – the band, the audience – we're all wondering where this thing is gonna go.

AC: To me, what's really interesting is the way that Flipper's "Sacrifice" and Alice Cooper's "The Ballad of Dwight Fry" are reworked into the context of Lysol as a whole. Tia Carrera's always done a phenomenal job of making others' music their own, be it the Who or the Beatles or whatever. How do you know when there's a song that could really work well within Tia Carrera's format?

JM: That's hard, too. Basically, the song needs a cool riff, like "While My Guitar Gently Weeps." From there, it's all about us doing what we do best, which is not thinking too hard about it and jammin' like we're in the middle of a live Hendrix jam where he takes a 20-minute solo and the rhythm section is knockin' the shit out of the root.

AC: I spoke to King Buzzo recently, and one of the interesting things he told me was that all the different band lineups over the years kept his music-writing fresh. The nature of Tia Carrera writing an album is obviously different in that it's based more on spontaneous creativity and capturing moments in time, but the new disc also has a few collaborations as well. How did working with Ezra Reynolds and Jeff Swanson change the recording process for you?

JM: It was really cool to add some different textures to the jams. The work that those two did took the jams to a different level. Plus, it's something that we've tried live a few times, too, so it was cool to capture it on tape, because we never really had heard what it sounded like other than being right there playing the show and then afterward trying to remember if it sounded cool or not.

AC: If King Buzzo wanted to join Tia Carrera, would you let him sing?