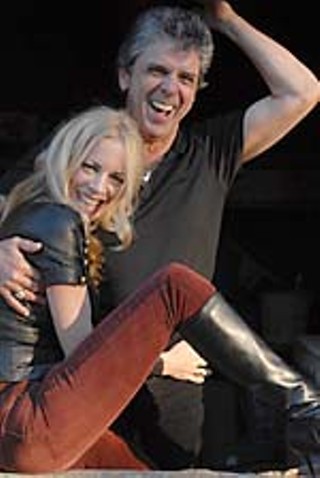 Austin has its share of genuine rock stars. Few come as pedigreed and charismatic as Bobby Whitlock, however.

Who's Bobby Whitlock? His main claim to fame comes as songwriter, vocalist, and keyboardist for Derek & the Dominos, Eric Clapton's post-Cream wrecking crew that gave the world seven breathtaking minutes of "Layla." Beyond that endlessly radiant moment in 1970, Whitlock's story is truly incredible.

For starters, he and the other Dominos were George Harrison's core band on All Things Must Pass. Hardly confined to the Beatles camp, he also appears on the Rolling Stones' Exile on Main Street, albeit uncredited. A prime component of Dominos precursor Delaney & Bonnie & Friends, Whitlock has had his songs cut by John Prine, George Jones, Tom Jones, Michael Nesmith, and others.

One Monday night last month, the cream of those compositions set Austin's Saxon Pub alight. It hardly mattered that the South Lamar institution was modestly peopled or that Whitlock and his wife CoCo Carmel performed as a duo on acoustic instruments. They ran though the balance of Layla and Other Assorted Love Songs, "I Looked Away," "Keep on Growing," "Anyday," "Tell the Truth," "Why Does Love Got to Be So Sad," "Thorn Tree in the Garden" – all songs Whitlock co-wrote or wrote – and they did them with ferocious soul. That soul comes natural for Whitlock, who was born in Memphis in 1948 and recording for Stax Records by the time he was 15.

Home of Otis Redding, Isaac Hayes, the Staple Singers, and a whole lot more, Stax attempted a pop imprint called Hip in the mid-Sixties and Whitlock was the first white artist signed to it – the kid who also stepped in on occasion as singer for Stax's legendary house band, Booker T & the MGs. "Steve Cropper was my mentor," beams Whitlock in the music room of his new digs near Manor. "I learned how to play the B-3 by watching Booker T. It was a great time to be in Memphis. Albert King and I also became very close."

Late in '68, Delaney and Bonnie Bramlett, who had just released their first album for Stax, came to Memphis. That was Whitlock's ticket out of town. As he spins another tale, the still boyish musician's innate Southern gentlemanliness blooms. He's obviously spun these stories before, but he revels in telling them.

"Bonnie's reputation was 'The White Aretha Franklin.' They came to see me play and afterwards they said, 'We're putting a band together. Do you want to come to California?' I had only ever been to Atlanta, so I said, 'Hell yeah!' That was a Thursday night, and I was gone by Saturday. When I got there, they had Carl Radle on bass, J.J. Cale on guitar, Leon Russell on keyboards, and Bobby Keys on horns. It was like a dream. I went from where I had my feet firmly on the ground to a completely foreign land. In Los Angeles, suddenly, we were what was going on."

With that, Delaney & Bonnie & Friends scored the opening slot on the Blind Faith tour in 1969. One of the era's first supergroups, Blind Faith was guitarist Clapton and his Cream bandmate Ginger Baker on drums, Steve Winwood from Traffic on keys, and Rick Grech on bass.

"Delaney and Bonnie was on tour with Blind Faith and kicking their ass!" exclaims Whitlock, eyes aglow. "It was a stomping band. Every review said that Blind Faith was getting blasted by this gospel/country-rock/soul band. Eric got close to us because we were a tight unit that was always singing and playing music. He had never experienced that and wanted to be part of it. When we were playing in Toronto, Delaney asked me what I thought about him playing with us. I said, 'OK, but he'll have to do something about those pink pants.'

"A couple of weeks later, I'm the one wearing pink pants."

After the tour, Clapton returned to England, and most of the Friends left the Bramletts to join Joe Cocker's Mad Dogs & Englishmen. Whitlock wasn't far behind. After another of his employers' marital blowouts, the keyboardist called up Steve Cropper, who suggested contacting Clapton. The guitarist agreed to a visit, so the next day Cropper paid Whitlock's way to England. "I lived at his house for about six months."

It was during that time that most of the original songs on Layla were composed. The two made an odd pair, the British superstar and a soul-crazed youngster from Memphis, but they connected on their love of blues, especially Albert King. Derek & the Dominos didn't come together as a band until George Harrison called Clapton for what became All Things Must Pass. Two other Delaney & Bonnie alums, bassist Carl Radle and drummer Jim Gordon, were the final Dominos falling in place.

Those who've never heard Layla and Other Assorted Love Songs are missing out on one of rock & roll's singular recordings. Whitlock, who'd previously co-written only one song with Delaney, pushed Clapton to emotional heights that the guitarist never again reached. The appearance of Duane Allman in the middle of the recording sessions drove the guitar histrionics even higher. The sordid story of the album's birth is available in Jan Reid's bottled lightning new book.

"After the recording," recounts Whitlock, "we were on the road, and we scored an enormous amount of drugs to take with us. That was the beginning of the end for us, because we had a whole lot of cocaine. We did 50-something dates in the same amount of days. [Still], on our worst night we were the best band on the planet. It was impossible for us to play badly."

Though the double album stiffed, achieving immortality only two years later when FM radio began playing the LP's title track, the band attempted a follow-up, which disintegrated when Clapton and Gordon almost came to blows in the studio. Whitlock remained in England to see if Clapton would regroup, but that's when the guitarist's four-year tailspin into heroin took hold.

Whitlock's subsequent solo career resulted in four albums. The first eponymous LP was well-received for Whitlock's soulful Southern charm, but the others garnered diminishing notices. He finally called it quits in 1976.

"It wasn't hard to stop," Whitlock grins, "because there was nothing going on in music. You know I'm indirectly responsible for disco? [Clapton's manger] Robert Stigwood took the Dominos' money, used it to create RSO Records and record the Bee Gees. My deepest apologies to the entire music world."

He retired to a farm in Mississippi, married, and raised two children. He built his own recording studio and did occasional guest shots for the likes of Jeff Healey and Buddy Guy. He met his wife initially in 1990 when Delaney Bramlett brought his mother to Mississippi to see her dying sister. After Bonnie, CoCo Carmel was Mrs. Bramlett for 13 years. Once together, the duo's act was born after Whitlock spotted The Layla Sessions 20th Anniversary box set in a store.

"I thought, 'I'm not buying my own record when nobody's ever heard but one, possibly two songs from it!'

"That's when a light came on. The songs on that album are as new today as they were then. They just never had anyone perform them that had anything to do with them. I made one phone call to Allan Pepper, the man that owned the Bottom Line in New York. I told him I had an idea of me and CoCo playing the songs on Layla acoustically. He invited us up to open for someone, and after we finished, people lined up to talk to us."

A good representation of what they do is available on their live disc, Other Assorted Love Songs (Domino), from 2003. After living in Nashville for almost a year, the duo moved to Austin about a month ago.

"I was a little too soulful for Nashville," laughs Whitlock. "We spoke to David Milsap, guitarist for Delbert McClinton, in Fort Worth earlier this year. He told me Austin was the place to be. It reminds me of Memphis in 1965, when it was about the music, and everybody was supportive of everybody. Now I can't imagine living anyplace else."