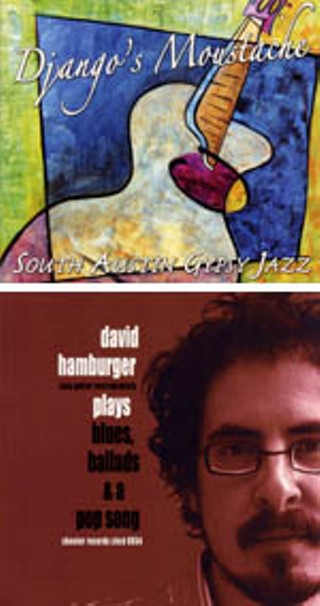 Few guitar-centric albums appeal to those fatigued from the instrument's blanched overexposure. Django's Moustache's South Austin Gypsy Jazz will. Given their name, this acoustic guitar-guitar-bass/ sousaphone trio plays tribute to the luminary gypsy jazz guitarist Django Reinhardt: "Latcho Drom" is a lyrical tour de force of the improvised idiom's warm and woody melodies, while the accordion on "La Yunta" and "J'attendrai" pours some société into le café. The dozen tracks don't cover any new creative turf, yet they still make for an enjoyable listen – guitar freak or not. David Hamburger, meanwhile, preaches primarily to the string choir, his second solo album presenting a dozen unaccompanied tracks of acoustic goodness. The Dobro picker for Austin's traditional Grassy Knoll Boys brims with talent, as a composer (penning all but two tracks here, one being the Zombies' "She's Not There"), lecturer, performer, and contributing editor to Acoustic Guitar. Hamburger's depth shows in the melodic dioramas here, from the harmonic, hammer-on blues of "Smolderin'," to the walking counterpoint blues of "Bryant on Six," every bit as lovely as a baroque etude.