Thunderpalooza, the two-day concert scheduled for last weekend at the Thunderhill Raceway in Kyle, instead came crashing down in a pileup of accusations and finger-pointing. Billed as a benefit for breast-cancer research and underpriveleged-children's charities, the event was to feature the Beach Boys, Eddie Money, Edgar Winter, Rick Derringer, and several local acts. Things went south early last week when Hays County officials informed the city of Kyle, a Thunderpalooza co-sponsor, that promoters Human Spirit had not filed a mass-gathering permit request with the county. According to Title 9 of the Texas Health and Safety Code, such permits must be filed 45 days in advance and are necessary for any event expected to attract more than 2,500 people that takes place outside the boundaries of a municipality. "It's my understanding that they weren't aware they needed that permit," city of Kyle Public Information Officer Jerry Hendrix said Monday. "From our point of view, they're the promoter and organizer of the event, [and] it's their duty to be aware of those things." Since Kyle had put up $40,000 for Thunderpalooza, the lion's share of which went toward the Beach Boys' fee, Hendrix said the city looked into moving the concert within city limits, but Human Spirit director Rocky DeMarco had already been negotiating to move it to the Travis County Exposition Center. It didn't happen there either; no one connected with Thunderpalooza appears to have seen or heard from DeMarco since last week. The Kyle City Council was scheduled to determine whether or not to pursue legal action against DeMarco at yesterday's meeting. Curiously, a spokeswoman for the Expo Center and Thunderpalooza talent buyer Robert Devine both said Monday that DeMarco had filed the necessary documents and made the required down payments with them, so the reason for his failure to apply for the county permit remains a mystery. TCB left a message for DeMarco Monday afternoon and had not heard back at press time. An operator for Star Tickets said no refunds would be given until the concert is officially canceled, nor would she say how many tickets had been sold. A message on the Human Spirit Web site Tuesday said Thunderpalooza had been "postponed."

Austin's hip-hop community has made great strides in catching up to the rest of the music scene in recent years, but even a decade ago, only KAZI and KVRX would even touch it. Heads were forced to seek refuge at DJ-driven nights like Monday at Nasty's, which continues to this day. "When it first started, I think it was such a novelty for something to really jump off like it did," says DJ Mel, who began the night in October 1996. Over the years, as hip-hop's local profile gradually increased, Nasty's devotees likewise spread the word far and wide. "A lot of people I see in other cities where there's a high concentration of people who used to go to UT, Nasty's was like a rite of passage for them," says Mel, who also DJs this weekend's Stitch fashion show at the Austin Music Hall. Mel reports he's even heard Brooklyn's award-winning Rub parties, where he guest DJed last summer, referred to as "like Nasty's in New York." Nasty's core audience has become heavier on townies than students, adds Mel, but the night has always been a social hub. "I have close friends who met their girlfriend that they've dated for years there, or their wife," he says. And although hip-hop may be much more prevalent around town these days, Mondays at Nasty's are as unique as ever. "We're not standing behind a laptop, waiting for the song to fade out and play another one," Mel says. "We're actually still mixing it in a creative way."

From 1995 to 2000, the Chumps, who play for the first time in six years Friday at Beerland, embodied a particularly debauched strain of Austin punk rock. Their live shows were marked by flying bottles and bodies, and notorious parties at the band's house on 38th Street often lasted for days. "We wanted to do what the Motards were doing, basically turn the Blue Flamingo upside down," says bassist Frankie Nowhere. "I remember more when I see photographs of those days, but a lot of it is blurry," admits singer Sean McGowan. The band quickly won an enthusiastic and loyal following with squalid songs like "Kill All Musicians," "I Hate My School," and "Self Destruct," though today they're careful to point out that not all their repertoire was true to life. "'MoPac Rapist' is not true," says McGowan. "That guy lived two blocks away from me; that's where that came from," adds Nowhere. "'God Damn American Eagle' is the strings on the bass, not a political song." The Chumps' sole LP, Good Times, which Super Secret Records and Mortville re-release this month augmented with their two 7-inches and a video, came out in 1999 and is still acknowledged as an Austin classic. Locals the Ends ("Sleazy") and Yuppie Pricks ("Fuck You, I'm Rich") kept the Chumps' name alive by covering their songs, but the band downplays any lasting influence they've had. "I talked to Buxf [Dicks guitarist Parrott] about this a month ago, and he said he didn't think people would remember them a year later," Nowhere says. "It seems to be going the same way for us. It was just a real fun time, mixed with a lot of insanity." 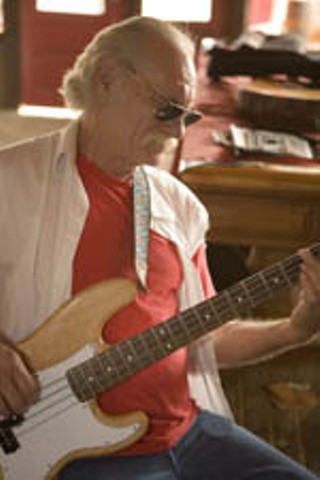 David Zettner, friend and sometime bandmate of Willie Nelson, passed away last Tuesday at his home in Briarcliff. Zettner, 61, grew up near San Antonio in Helotes and played bass in Nelson's mid-Sixties group the Offenders. After he was drafted in 1968, Zettner recommended high school friend Bee Spears to fill his vacancy but continued playing with Nelson sporadically, most recently on 2003's Run That by Me One More Time; he also produced Nelson's 2001 album Rainbow Connection. In addition, Zettner was a talented artist who designed Nelson's Tougher Than Leather artwork in 1983 and did extensive work on his tour buses. "He was a close friend, a great musician," Nelson said in a statement last week. "He will be dearly missed."

What's that racket? Oh, just 7,000 drummers in town for the Percussive Arts Society International Convention, yesterday through Sunday at the Austin Convention Center. Events open to the public include the Drum & Percussion Expo today (Thursday) and Friday in Exhibit Hall 4 ($10), free concerts on the Convention Center terrace and late-night jam sessions in the Hilton lobby, and an attempt to break the Guinness Book world record for longest drum roll following Friday's marching festival. See www.pasic.com for more.

Congratulations to George Strait, who at 54 became one of the Country Music Hall of Fame's youngest inductees during Monday's annual CMA Awards. Strait's latest album, It Just Comes Natural, is currently No. 2 on Billboard's Country Albums chart. Meanwhile, R.E.M. and Van Halen were nominated for the Rock & Roll Hall of Fame's class of 2007 last week, joining 2006 holdovers the Stooges, Patti Smith, Chic, Grandmaster Flash & the Furious Five, and Bell County native Joe Tex. See how the fur flew over the Chronicle music staff's ballot next week.

VH1 Classic will rebroadcast the Cheap Trick or Treat Halloween Ball, recorded last week in Hollywood, Fla., 10pm Saturday. Hosted by Little Steven Van Zandt, the concert features the Romantics and Roky Erickson & the Explosives alongside the "Dream Police." "Roky loved the huge stretch limo that picked us up at the airport!" relays brother Sumner.

Friday is the final application deadline for SXSW 07; all applications must be filled out online at www.sxsw.com/showcase. The application fee is $30.