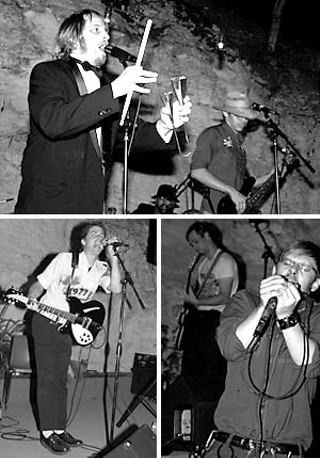 Austin's homegrown "hoots" can be hit or miss, but Halloween cover-band nights are no holds barred. It's the perfect excuse to tell your friends, "I'm gonna go see a Soundgarden cover band." Sunday on Red River, Friday After Dark's interpretation of the Police featured a saucy, white-blazered Sting mouthing off as they covered "Driven to Tears," but after a few songs, it became abundantly clear that the Police don't need a tribute band. The Chalk Outlines as the Talking Heads were a perfect segue. "Psycho Killer," "Burning Down the House," and "Once in a Lifetime" all had Byrne down, although the tux-clad singer howled a helluva lot better. Avi Hartman did a so-so Tom Waits solo before the Fall Collection tackled the Clash. Singer Danny Dunlap, in a spray-painted "Police and Thieves" shirt, blew Joe and Mick out of one amp on "London Calling" and an inspired "Clampdown." Their cover of "Janie Jones" kicked ass. Three-quarters of Cue and one-fourth of the Octopus Project made up WWJLD?, and their Jesus Lizard covers were the evening's highlights. Cue's Jason Brister alternated with OP's Toto Miranda as David Yow, complete with audience confrontation, drunken slithering, and trademark barks, but minus any nudity whatsoever. (Not even mysterious bodily fluids.) Halloween: also the only time Jesus Lizard will be followed by Dolly Parton. Benko contained only bassist Erik Grostic and drummer Graham Reynolds, so Dolly was there in "spirit." The "Eye of the Tiger"/"9 to 5" medley was interesting, but "Jolene" gets 'em every time.