Britt Daniel is too busy to talk to the press, which is a good thing. According to Merge Records, Daniel and his Spoon mates are knee-deep in the studio, toiling away on the follow-up to 2005's Gimme Fiction; he'll surface at the Parish for a solo show tonight (Thursday) with Sally Crewe & the Sudden Moves and Pink Nasty. Moreover, the soundtrack for upcoming Will Ferrell/Emma Thompson comedy Stranger Than Fiction, out Tuesday on Columbia/Sony Music Soundtrax, is a virtual Spoon album itself, with "Small Stakes," "My Mathematical Mind," "Vittorio E," and brand-new "The Book I Write." (Britt Daniel back on a major label – now that's stranger than fiction.) Daniel also collaborated with Redd Kross drummer Brian Reitzell on Stranger's score; several of their efforts fill out the album alongside songs from Friday's Emo's visitor Wreckless Eric, the Jam, Maximo Park, M83, and, naturally, Vangelis.

Eddie Stout's local Dialtone Records is as old-school as they come, a throwback to when enterprising record men ran labels from their houses or the trunks of their cars. "I'm just trying to make enough money to put out the next record," says Stout from his day job at Macy's, where he keeps the ladies of Austin in fine footwear. Stout actually does run Dialtone from his house, and after clearing up some distribution difficulties, has released three of this fall's cooler CDs: Houston's Third Ward Blues, by former Freddie King and Clifton Chenier sideman Joe Doucet; the self-titled Texas Southside Kings, an assortment of Texas R&B vets including 94-year-old piano man Big Walter "The Thunderbird" Price; and ... With Friends, the latest from Austin gospel legends the Original Bells of Joy and buddies Willie Nelson, Joe Ely, Kimmie Rhodes, and more. "I look for the guys who recorded in the Fifties, or didn't get a chance to record," says Stout. Although the U.S. market for Stout's product is limited ("none of my stuff sells"), sales in Europe and Japan are enough to keep Dialtone afloat. "There's nobody doing this," he says. "Or if there is, I don't know 'em. Maybe at the Smithsonian or something."

Doug Moreland has carved out a unique niche in the Texas country scene. Literally. To supplement his income as an entertainer, Moreland practices the surprisingly lucrative art of chain saw sculpture. His 6-foot cowboy at Hill's Cafe in South Austin sold for a cool $1,350. "That saved my butt," he says. The West Texas native, 32, was at a 1999 gig in New Mexico when some friends in the area invited him to help carve some bears out of logs. "The people behind me said, 'Between the three of 'em, we sell 100 a week for $100-150 apiece,'" Moreland recounts. "I was like, 'Man, can I borrow a chain saw?'" His band immediately cleared its schedule, bought chain saws, and spent two months in eastern Tennessee carving away. "I made enough money to record a couple records and move back to Austin," Moreland says. Unlike Jackyl, Moreland leaves the chain saw out of his stage show, playing fiddle, guitar, and bantering with his band and border-collie sidekick Saidi, a variety similar to his new, Western swing-dominated album. The self-titled disc's abundance of traveling songs, he notes, is a natural byproduct of a schedule that takes him as near as El Campo and College Station and as far as Panama and Costa Rica, where he had several gigs in September. "I think every gringo on the island was there," says Moreland, who swings by Antone's Wednesday. See further carvings at DougMoreland.com or his Cattlelacs store in Manchaca. 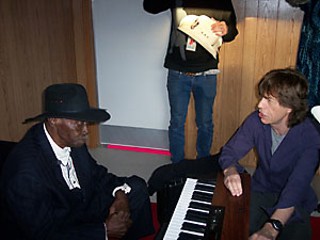 'When I was your age ...': Pinetop Perkins and Mick Jagger backstage at Zilker Park (Photo By Susan Antone)

"I think I've been on a bender ever since the Stones," confided a friend, clad as Amelia Earhart "after dark," at Secret Weapons singer Ashleigh Daniel's fabulous Halloween party last Saturday. Amen to that. The Keith Richards exercise program remains in full effect for TCB, and reports of various Stones-related local activity continue filtering in. On his way out of Zilker Park, Chronicle Music Editor Raoul Hernandez witnessed the band's motorcade sweeping down Barton Springs Road, Ronnie Wood waving from an SUV. The night before, Lubbock-born saxman Bobby Keyes sat in with Felix Tap, David Holt, Jimmy Pettit, and Jon Blondell (under the name Felix & the Keepers) at Nuevo León, while Moonlight Towers guitarist Jacob Schulze and cousin Jill squired backup singer Bernard Fowler around Red River, taking in Captured! by Robots at Room 710 and a Side Bar nightcap. Richards, meanwhile, enjoyed some down time at the Four Seasons, where an awestruck bellhop encountered the guitarist waiting for an elevator. They conversed for several minutes before another guest came along and pressed the button, at which time it finally dawned on Richards that he hadn't. Truly an inspiration to us all.

Besides being Stones central last Sunday night and welcoming back old friends the Fabulous Thunderbirds, Sister 7, and Jimmie Vaughan for late founder Clifford Antone's birthday, Antone's beginnings were cast in metal and concrete Saturday afternoon. Mayor Will Wynn and other dignitaries, including U.S. Rep. Lloyd Doggett and former City Council Member Daryl Slusher, dedicated a Texas historical marker at Sixth and Brazos, where Antone, who passed away May 28 at age 56, started the club in 1975. Vaughan, James Cotton, and Derek O'Brien brought some blues back to the corner, while Wynn praised both Antone's love of the blues and philanthropy. The mayor cited Antone's Help Clifford Help Kids charity, which welcomes Maceo Parker to its annual fundraiser tonight at the Austin Music Hall, and his crucial role in making Austin a haven for musicians of every stripe. "We have to make sure [musicians] can be gainfully employed and stay healthy," Wynn said. On that note, the Health Alliance for Austin Musicians should know very soon how much its citywide Oct. 3 benefit day brought in. Nov. 1 was the deadline for the dozens of local businesses donating a portion of that day's receipts to HAAM to report their figures.

Out of Our Heads

Chicken Ranch Records owner Mike Dickinson is curating next week's Creepout! garagefest at Beerland, and, appropriately, it appears to be sponsored by the letter C. Reunited Austin trash-punks the Chumps headline Friday, and Nashville shakers the Clutters boogaloo Saturday. Other Creepout! artists, like the Strange Boys, Bulemics, the Ends, Night Terrors, and Goodnight Loving, are said to be considering name changes.

The Stones show will go down as the party of the year at least until Nov. 13, when the Recording Academy's Texas chapter doles out its annual honors at the Austin Convention Center. This year's honorees are heavy on H-Town: gospel diva Yolanda Adams, some band called ZZ Top, the chopped and screwed Swishahouse family, and our own SXSW founders Louis Black, Nick Barbaro, and Roland Swenson. Enjoy those cocktails with host Ray Benson, and guests Billy Bob Thornton, Jimmy Jam, Paul Wall, Lil Keke, and the one and only Coota Bang, guys. Go easy on the sizzurp. Tickets are $150 for Recording Academy members, $175 for the general public, and, TCB has a hunch, worth every last red cent.

Friday night at the Flamingo Cantina, Misprint magazine launches its "End of Austin" issue, featuring articles on "How to Survive the Robot Insurrection," "Post-Apocalyptic Video Primer," and a Trail of Dead interview. There's only one word for the Jungle Rockers, Mr. Lewis & the Funeral Five, Chalk Outlines, and Cavedweller lineup, and it's TCB's new favorite word ever: coconuts. Simply coconuts.