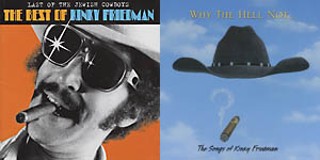 Last of the Jewish Cowboys: The Best of Kinky Friedman (Shout! Factory)

Why the Hell Not ... The Songs of Kinky Friedman

Kinky Friedman clearly suffers from multiple-personality disorder: gubernatorial candidate, mystery novelist, stray-dog savior, action figure. Of course, before all that, he was songwriter, and with Friedman's name now before more Texans than ever, these discs offer a timely refresher. Last of the Jewish Cowboys captures the essence of Friedman's performing persona: Onstage, he's first and foremost a clown, albeit a provocative and politically incorrect one, and this best-of leans heavily on comedy. Reaction to Friedman's recent "insensitive" comments verges on the remarkable given that this is the guy who penned an ode to Charles Whitman, told feminists to "Get Your Biscuits in the Oven & Your Buns in the Bed," and in the only song here he didn't write, gave voice to the "Asshole From El Paso," who "pay[s] the wetbacks 20 cents an hour." Even then, however, there's another, often-overlooked personality; Friedman's peeks into the human condition stand alongside the Clarks, Van Zandts, and Willies. That point is driven home more forcefully when truly gifted singers deliver those words ("vocalist" should never be at the top of Kinky's résumé). Why the Hell Not, a mix of newly recorded covers combined with previous honorings of Friedman, opens with Kevin Fowler's "Biscuits," but when Lyle Lovett tenderly delivers "Sold American," Charlie Robison turns "Wild Man From Borneo" into a Flannery O'Connor story, and Dwight Yoakam explores the isolation of "Rapid City, South Dakota," Friedman's oeuvre becomes a revelation. Jason Boland, Todd Snider, Bruce Robison & Kelly Willis, Willie Nelson, Reckless Kelly, Asleep at the Wheel, and Delbert McClinton also line up for the hosannas. No, they ain't making Jews like Jesus anymore … and couldn't possibly make another like Kinky.