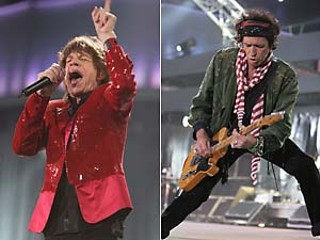 You Got Me Rocking

Before the lights went out, the fireworks went off, and the cosmos on the 2,500-square-foot video screen coalesced into the lips-and-tongue logo, the main thing the Rolling Stones' Zilker Park show Sunday evening had going for it was proximity. It was their first-ever show in Austin, practically down the street, and once it became clear a sellout wasn't in the cards, ticket prices dropped by nearly half; might as well go. With even their diehard defenders acknowledging that the band has oversaturated the live circuit in recent years, it was hard to get much more psyched than that. Shows what TCB knows.

Although attendance fell short of a 50,000-strong sellout (Mick Jagger announced 42,000 before "Streets of Love"), those who went got a show their grandchildren will hear about some far-off future day or, just as likely, heard about first thing Monday morning. What doubters didn't count on was the sheer scale of the production – TCB heard the nine-story, 300-ton stage compared to a parking garage, Disney World hotel, and a spaceship – an enthusiastic crowd of all ages willing to suspend whatever disbelief they may have harbored, and a band dead-set on making a favorable impression for its first time on Bat City soil.

Not only did they clear backstage (where Jagger paid homage to Pinetop Perkins earlier) to work up two Austin-only covers – Waylon Jennings' "Bob Wills Is Still the King" and Buddy Holly's "Learning the Game" – but whip-cracking opener "You Got Me Rocking," off 1994's slept-on Voodoo Lounge, was but one of several demi-obscure songs that dominated the concert's first half: "Sway" and "Bitch" from Sticky Fingers, Emotional Rescue's "She's So Cold," "Oh No Not You Again" and "Streets of Love" (the night's lone dud) from last year's A Bigger Bang, and Tattoo You's "Little T&A," which drew Keith Richards' best Lou Reed.

Before they broke out the hit parade, the Stones paid far more than lip service to their roots: the Jennings and Holly covers, the Temptations' "Ain't Too Proud to Beg," strong hints of Ike & Tina Turner on "Tumbling Dice," and their own mad, mod days of swinging Sixties London on "Let's Spend the Night Together," "Under My Thumb," and "Get Off My Cloud." The songs most everyone came to hear, the ones tattooed on our collective cultural subconscious, not only matched the production's proportions but surpassed them: "Start Me Up" and "Honky Tonk Women" from a sea of hands on the satellite stage extending 350 feet into the crowd, a hellacious "Sympathy for the Devil" and fire-breathing "Jumping Jack Flash." 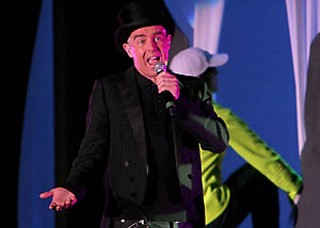 Encores "You Can't Always Get What You Want" and "Brown Sugar" sent the masses home on a cloud no one wanted to get off. Some dispersed to a beyond-packed Continental Club, hoping Ron Wood would show up for his Faces-mate Ian McLagan like he did last fall in Houston; others chose Antone's, hoping Richards would stop by, as was rumored, to see Hubert Sumlin and James Cotton. He didn't, but backup singer Blondie Chaplin, saxophonist Tim Ries, and Jagger's brother Chris and daughter Lizzie did, all but the latter getting onstage, as did surprise headliner Joe Ely.

TCB chose a quieter path, drinks at Club de Ville with the same friends for whom, in a bolt from the blue, our general-admission tickets were upgraded to primo bleacher seats. It was more to fill out the stands for the DVD being filmed than any kind of karmic reward, surely, but still a prime spot for this acknowledged skeptic to get rebaptized into the church of the Stones. And from what he's heard since – raves across the board – TCB was hardly the only one. Sunday night was magic, an epic night that will burn bright in Austin's memory for years to come.

Everything, in short, a show from the World's Greatest Rock & Roll Band could, and should, be.

Like Julie Andrews sang in Mary Poppins, a spoonful of sugar helps the medicine go down. It went down like silk at the Backyard Saturday night, where the Pet Shop Boys couched their sly critiques of conformity ("Suburbia"), consumerism ("Shopping"), hedonism ("It's A Sin"), and foreign affairs ("I'm With Stupid," from the London duo's biting new LP, Fundamental) in synth-pop smoother than a Hermes handbag. Of course, it was possible to ignore the messages altogether – except perhaps for the footage of Princess Diana's funeral screened during "Dreaming of the Queen" – and get swept away in the high-concept stage design and abundant camp on display during covers of U2 ("Where the Streets Have No Name"), Willie Nelson ("Always on My Mind"), and the Village People ("Go West"). Oscar Wilde couldn't have done any better.

The White Ghost Shivers' annual Hallowe'en Ball has quickly become the Samhain social event all the guys and ghouls are dying to attend. This year the Shivers take their "Flim Flam Follies" to the Oaks, 10206 FM 973 N. in Manor, with vaudevillians St. Idiot Collective, San Francisco's Peculiar Pretzelmen, and something called a "back-stage liquored-up picture show" – you've been warned. Beginning at 7:45pm Tuesday, shuttles leave every 15-30 minutes from UT's Disch-Falk Field at MLK and I-35; the last "party bus" leaves the Oaks at the stroke of 2am. Tickets available at Cheapo Discs and www.unlockaustin.com. See Music Listings for all the Halloween activities your black hearts and blacker livers desire; TCB respectfully suggests the Ron Titter Band and Dung Beatles' haunted Hole in the Wall show or the Suffragettes doing Ziggy Stardust front to back at Club de Ville alongside genius Ramones/ABBA Frankenstein Gabba Abba Hey. And the surprise hit of the ACL Festival, Austin's Palm School Choir, goes to war with the mystics at their annual Flaming Lips tribute, 6pm Sunday at Ruta Maya World Headquarters. No tricks (or cover), only treats – so bring some for the kids, who will be going table-to-table afterward.

Emo's booking guru Graham Williams and Alamo Drafthouse honcho Tim League think Austin needs another outdoor music festival, and if you enjoy the sort of music regularly routed through Red River, you no doubt agree. "I think ACL and the like are great, but only touch on the music I and so many others dig," Williams says. So Friday, Dec. 1, in Waterloo Park, their inaugural Fun Fun Fun Fest spreads 26 bands and DJs over its punk, indie, and dance stages. Tickets are only $20, buying sets from Spoon, Peaches, Circle Jerks, Prefuse 73, DJ Mel, Black Angels, Lucero, Octopus Project, Riverboat Gamblers, Applicators, Krum Bums, and Lower Class Brats, to name a few. More info at www.funfunfunfest.com.

It's hardly the case personally, but TCB has heard that some people may have money left over from Sunday's Stones show. In that case, this weekend's return of the Austin Record Convention, Saturday and Sunday (and Friday for early birds) at the Crockett Center, 10601 N. Lamar, should take care of that in short order.