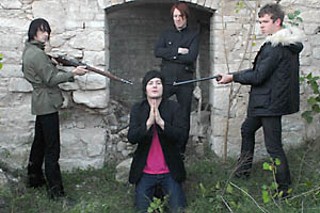 Keeping up with the IV Thieves isn't easy under the most benign circumstances, let alone their first show back in the quartet's adopted hometown after a two-week tour of their native England. That this Monday-night wingding at Sixth Street Cuban eatery Habana is also the release party for their first album as a proper band, If We Can't Escape My Pretty, only compounds the high spirits. They've been itching for New West to release the album since recording it back in January. Tonight, the label makes good with free beer, washtubs full of Tecate and Lone Star. Capital-T Trouble, in other words.

The foursome of Nic Armstrong (vocals/guitar), Glynn Wedgewood (likewise), Shane Lawlor (bass/vocals), and lone Yank Elliott Frasier (drums) shakes off the last remnants of jet lag with a boisterous set before a full patio of friends, fans, New West staffers, and an ME Television camera crew. They overpower the overmatched PA after all of two songs, and raucous closer "Broken Mouth Blues," from last year's The Greatest White Liar, climaxes with the band members' girlfriends and numerous other female admirers shaking what their mamas gave them onstage. Soon enough, sure enough, the carousing gets out of hand. From Habana, the party moves north for more drinks and dancing at the Beauty Bar, then to a house near Shoal Creek, finally breaking up around dawn. Welcome home, lads.

The next day Armstrong sends a text asking to postpone the band's Chronicle interview for 24 hours. No problem. Only he neglects to inform his bandmates. So about an hour later, Wedgewood calls. He, Lawlor, and Frasier are at the Longbranch Inn, as scheduled, wondering where the hell we are. Oops.

Predictably, this earned Armstrong an earful.

"Glynn was pissed," allows the lanky Nottingham native the next night, amid the chatter of a wine tasting (of all things) on the Longbranch patio. For his part, the magenta-haired, sharp-eyed Wedgewood doesn't harbor any lingering ill will, though Lawlor and Frasier are unable to join us this time. Both in their mid-20s, Armstrong and Wedgewood are generally so genial and good-natured that the overwhelmingly pessimistic tone of the new Escape is a little shocking. The music is vibrant, and the tunes are catchy, but from the title forward, the lyrics are full of drudgery and disappointment, frustration and dead ends.

"Life's shit," announces Wedgewood. "There's no kind of silver lining, and if there is, you're completely unaware of it. [The album] is very honest emotions and observations. It's all based on true events in some shape or form, every song."

Luckily, there is a silver lining to the Thieves' story. For one thing, they got out of Nottingham. The manufacturing city of 666,000 in the East Midlands has a crime rate several times higher than the English national average, something the Thieves can swear to firsthand. Even the band's New West bio calls their hometown "England's capital of crime." On this past tour, shortly after he and Armstrong parted company, their old friend and former tour manager was hit over the head and mugged. Weeks can go by, Armstrong says, with scarcely a glimpse of the sun, and shady characters are as close as the next house over.

"I used to live next door to this bloke; I don't know what he did," Armstrong says. "I'd just see him standing on his doorstep smoking a cigarette. One day I heard a little girl's voice wailing; I could hear it through the walls: these two blokes' dark laughter and this girl crying.

"I never checked it out. Maybe it's just as well."

It didn't get much easier for them once they moved to America. They didn't wind up in Austin by accident, but easily could have. Armstrong's ex-girlfriend mailed off a tape he had made, a demo that eventually became The Greatest White Liar, and less than two weeks later he had a record deal but no band. He recruited Lawlor, Wedgewood, and original drummer Jonny Aitken, and they electrified the unsuspecting crowd at New West's 2005 SXSW day party, a memory that still makes them chuckle. They came back through Stubb's a few weeks later with Louis XIV and wanted to relocate to America but not to New York or Los Angeles. They decided on Austin, mostly because Lawlor had already met his now-fiancée. The others followed him down here one at a time with little more than the clothes on their backs; even now, most of Armstrong's things are still in a Nottingham storage locker. Neither did Austin roll out the red carpet at first. 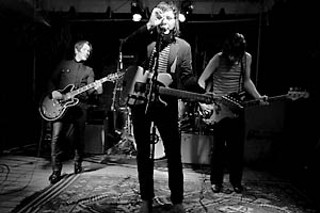 Eye of the Beholder: The IV Thieves at Habana, Oct. 16 (Photo By Felicia Graham)

"We were stranded down here in the worst kind of environment," says Wedgewood. "It was the worst kind of hell. Somebody took us in but kind of begrudged taking us in at the same time. They made us feel uncomfortable, like we didn't want to be in the house at all."

They spent a few days building shelves in New West's Austin stockroom but almost immediately began writing and rehearsing material for Escape. Unlike Liar, which Armstrong wrote and performed almost completely on his own, all four Thieves contributed this time around, prompting their name change from Nic Armstrong & the Thieves to something more in line with their new democratic balance. Inevitably, some Thieves' efforts were more fruitful than others, and Aitken wound up leaving the band.

"It's all about the best song, really," Armstrong says. "That's one of the problems Jonny had. We spent two years helping him with his compositions, and they just didn't make the grade in the end."

It took almost no time to find Frasier; the Beaumont native and former Young Heart Attack timekeeper was one of two drummers who auditioned. The Thieves still speak highly of Aitken, though, and patched things up on this past tour. "He'll turn up somewhere," Wedgewood says. "It wouldn't surprise me if he ended up playing with the Who or something like that."

Sharpened by all those sticky summer afternoons at the Oltorf Music Lab, the band was playing once or twice a week on Red River by fall, drawing bigger crowds every time: Room 710, Club de Ville, Beerland. Several Longbranch dates honed their live wits even further.

"I saw a parallel in them and the Beatles, how the Beatles abandoned Liverpool and moved to Hamburg," says former Young Heart Attack guitarist and Bubble Studios co-owner Chris "Frenchie" Smith, who produced Escape. "How they completely left logic and all the elements of home behind for the better of the band. To me, it really struck a familiar nerve of the kind of ambition and drive that the Beatles had."

The Thieves' popularity continued growing in England as well; Noel Gallagher became a fan and invited them to open some Oasis shows, making them almost surely the only band to play both Room 710 and Cardiff Millennium Stadium in Wales. They toured Europe and the UK with Paul Weller, and had to turn down more Oasis dates and a Dandy Warhols tour because of prior commitments. This spring they did several weeks with the Pretenders, catching the ear of Rolling Stone's David Fricke at the same Roseland Ballroom show that saw Armstrong proudly drain a Lone Star onstage. Smith, who sometimes accompanies the Thieves on the road, says they've had a few "Mötley Crüe moments" already, "stuff like pulling their coats over their heads to escape the crowds."

"I didn't give a shit about Oasis since their first single 'Supersonic' and maybe two or three others over their career," says Wedgewood. "But I'd watch them, and it was like, 'Oh yeah, they've got it down.' They get ripped up every night, but they do the job onstage."

Besides their rakish rocker looks (all four are taken at the moment), the Thieves' appeal stems from their songs' curious equilibrium. Escape is hip enough that single "You Can't Love What You Don't Understand" is currently one of five finalists in MTVU's The Freshman contest, wherein viewers vote on which video the channel adds to regular rotation. Echoes of the Killers, Strokes, and Black Rebel Motorcycle Club flit around the album, as do shades of the Stone Roses, Stereophonics, and Oasis, but the disc is equally indebted to the Beatles ("The Sound and the Fury") and Kinks ("All the Time"). Its melodies are sweet enough to safely qualify Escape as a pop album, but one of the best songs is the Zeppelinesque, messed-with-the-wrong-woman rockabilly riot "Have Pity," and extended closer "Chase Me Off/Out" changes course several times on its way to a final psychedelic breakdown.

Sweaty, flailing rock stars onstage, offstage the Thieves are regular blokes, salty of tongue, quick with a smile, and of course fond of a pint. They can drink most bands under the table but currently prefer staying in with their girlfriends to painting the town, CD release parties the exception. Their touring schedule is as busy as they come, but they've settled into Austin enough that they not only call the city home but think of it as such. Armstrong, in fact, can point to the precise moment he knew the IV Thieves were no longer just visiting.

"The free drinks stopped," he says.

"Every night we went out, people were buying us drinks," laughs Wedgewood. "It was like that all the time: 'Uh-oh, here come the crazy English guys.'"