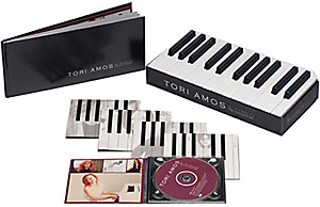 A Piano: The Collection (Rhino)

Tori Amos wasn't the first classically trained pianist and minister's daughter who radiated sexuality. She borrowed a bit of Patti Smith's fuck-off and Kate Bush's come-hither, but her female gaze looked straight into the subject. This 5-CD box set houses eight releases' worth of material, alternate mixes, rarities, and B-sides packaged with a track-by-track dissection by Amos. The extended Little Earthquakes, her 1992 debut, still feels raw, and opener "Leather" sums up her early career: "Look I'm standing naked before you." Earthquakes was a line in the sand, vitriol and purr from the maw of a fire-haired siren heard on the wrenching "Silent All These Years" and "Winter." 1994's Under the Pink is another example of the singer's forked tongue, especially "The Waitress," where she seethes her desire to kill a co-worker before the caveat, "But I believe in peace, bitch." The snaky "God" skewers Amos' Christian upbringing: "God, sometimes you just don't come through. Do you need a woman to look after you?" And "Blood Roses" from 1996's gritty Boys for Pele, is like a Victorian death ballad, Amos pounding the harpsichord, groaning about chickens getting "a taste of your meat." Those three albums were awkward and beautiful in their anger, but her later albums rely more on theme and less on the soul laid bare – Scarlet's Walk was written after 9/11, while last year's The Beekeeper was obsessed with gardening – and with each, Amos seems to take on a different, more indulgent persona. The B-sides disc deserves attention: "Pool" is absolute communion, and the previously unreleased "Peeping Tommi" is inspired. Ultimately, A Piano: The Collection might make fans long for the days when "So you can make me cum. That doesn't make you Jesus" sounded truly sacrilegious.