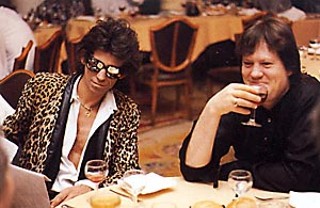 Bobby Keys' drawling laugh is 100% Texan as he talks on the phone from his hotel room in Seattle. It's also colored by nearly 40 years of performing at the left hand of Keith Richards, which makes the Slaton, Texas, native the longest-standing member of the Rolling Stones' auxiliary musicians. Keys' tenor sax punched brassy soul into Stones' songs such as "Live With Me" and "Bitch." Most famously, Keys laid into "Brown Sugar," slurring and honking with such outrageous abandon that his solo defines the song as much as the jubilant whoops at the end.

"I first went on the road with the Rolling Stones in the year of our Lord, 1969," he proclaims, rolling the "R" in Rolling with dramatic flourish. "But my grandfather gave me away to a drummer when I was 15 years old."

The drummer was J.I. Allison of the Crickets, a little ol' hometown band, and the next year, Keys was on the road with Buddy ("Party Doll") Knox. The other Buddy, Buddy Holly, was also around, just one of the gang from Lubbock who made tracks back and forth to Norman Petty's studio in Clovis, N.M. It was the beginning of his career in rock history, but Keys pooh-poohs any notion that he's a master of the instrument. "I just stick it in my face and blow."

Keys' platinum credentials include work with Barbra Streisand, Marvin Gaye, John Lennon, Lynyrd Skynyrd, B.B.King, Eric Clapton, Sheryl Crow, Delaney & Bonnie, and Joe Cocker. He also recorded and toured with Joe Ely for Lord of the Highway in 1987 and sometimes finds time for his own band, the Ace Liquidators. Still, he's the Stones sideman, the one who earned his stripes the old-school way.

"Lots of stories outta Lubbock in the Fifties," he agrees. "Buddy was recording there, and Waylon Jennings did some stuff. The Fireballs. Then I left Lubbock because the police department suggested I do so."

That's followed by more cackling laughter, the sort that must have accompanied the infamous television-throwing incident in Denver captured on film in Cocksucker Blues. Keith and Keys orchestrated that bit of music lore that's come to epitomize the sanity-testing mentality of being out on the rock & roll road.

"I play with toys," Keys boasts proudly about today's less extreme hotel room activities. More specifically, he plays with radio-controlled model planes, and on tour off-days, he can often be found with Blondie Chaplin buzzing the skies. "I have one plane that travels with me. It travels with the equipment. Sometimes," his voice takes on a jovial shade of confessional regret, "I play a round of extremely poor golf. Then I drink."

Mainly, Bobby Keys gets to do what he wants. As section leader for the Rolling Stones, he's top brass, hand-picking the horn players for the tour and leading them through the band's road-tested classics. Along the decades, he's bonded with Richards, an ax-and-sax friendship that's kept them working on projects together even when the Stones aren't rolling. But there's nothing like touring.

"My favorite thing about being on the road is waking up every day and seeing Keith awake at the same time. We're both 12-18-43, astrological twins. My other favorite thing is making sure he's still breathing and not climbing any 2-foot-tall trees. Now that was the silliest thing I ever heard of in my life. Defeated by a dwarf tree."