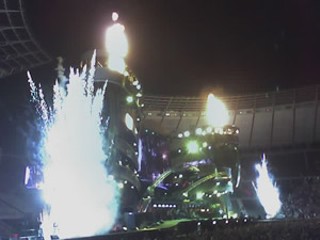 "Love and hope and sex and dreams are still surviving on the street. Look at me! I'm in tatters."

Checkpoint Charlie hums Bertolt Brecht, and Zoo Station bustles for Bao Bao the panda. Wings of Desire reach skyward, while underground, ghostly bookcases purged for a sodden bonfire stand empty. Holocaust memorials begin in the cobblestones underfoot and, near the Brandenburg Gate, rise overhead as monoliths. Remnants of two walled cities and the no man's land between them trap contemplation like the historical pockmarks sprayed high and low across east side facades. Four thousand holes in Blackburn, Lancashire, pale next to bullet-riddled Berlin.

Or just lucky – a snowball gaining mass, the rolling stone not gathering moss.

Another singular eye-catch, this one in the doorway of a Cold-War-retro East Berlin thrift, pimps cover band Heart of Stone, 20 Juli 06. Tomorrow. The image, five fresh-faced English skinnies from the Sixties, backdropped against atomic gray/white and a ruby Tuesday red tongue, glows like a 1950s travel agency window display. A few blocks down, on yet more construction, its freshly taped doppelgänger becomes a U.S. citizen. The Pergamon, Berlin's delirious museum of antiquities, loses out.

Suddenly, tunnel behind us, parking lot in front, the park vegetation reveals a wide elevated plain atop of which sits its petrified colossus: Olympiastadion. Five stone rings, cut from the Lower Alps that pieced together this rock saucer for the 1936 Olympics, hang out front, entwined. Jesse Owens Allee, a street feeding the complex, honors the Alabama-born track star who upstaged a dictator even as Germany celebrated his gold mettle. Deep inside the 242-million Euro renovation for the 2006 World Cup, two Americans grin.

Cologne rang up platinum the instant that Javier, banking in Düsseldorf, read through the European tour dates on RollingStones.com in February. The Stones in Cologne. Love You Live, partied in Paris '76-'77, crushing bootleg Brussels Affair 1973, and the Wembley chorus on 1991's Flashpoint all held exotic sway in the gatefold reveries of a Stones native. Amsterdam the following Sunday? Twice the licks.

Then came Keith's April 29 fluch in the Karibik, and down went the first leg of the Stones' summer romance. One drilling or two with that brain swell Mr. Riff Hard? We'll get back to you, shrugged Loogian press releases. As June became July, A Bigger Bang 06 finally came back online. Five whole dates before Cologne. All previous gigs cancelled – no reschedules. An electronic exhale flies across the Atlantic.

"Yeah, but did you see they moved Amsterdam by one day?" grimaces Javier. "Now the show's Monday."

"Pleased to meet you, hope you guess my name."

Damnation. Delta Airlines has their way with me, but not until conceding Berlin on the front end, and an added night in the City of Bicycles on the back. Javier and I never even think to check the tour dates prior to Cologne (Köln). Olympiastadion: pure serendipity. A distinguished German fiftysomething, with the only two open seats in the meal car from Berlin to Düsseldorf, raises a foot-high wheat Pilsner to us before any of our party realizes we all spent the night together at Olympiastadion. The road to Damascus is littered with businessmen whose schoolyard "Satisfaction" began the summer of 1965. Toast my birth year.

"Pleased to meet you, hope you guess my name."

Cologne Cathedral, looming over the train station's glass foyer, makes Notre Dame look downright Baptist. According to postcards, allied bombers leveled everything in Köln save for the titanic house of worship. RheinEnergieStadion, Deutsch engineering at its steely, square, fussball best, held its own Sunday service several tram stops later. Autumn temperatures and towering trees, green grass and hippies young and old: music communion. Inside, the five English skinnies in Razorlight swagger with black and blue melodies, songs about "America," and even a "Los Angeles Waltz."

The headliners, meanwhile, sub in "She's So Cold" and "As Tears Go By" for Berlin's "Sway" and "Angie," with "Get Off My Cloud," on the satellite stage midway through the show, still sneering "two's a crowd." One thing plays out exactly the same 48 hours apart. The moment Mick, Keith, Ronnie, and Charlie materialize onstage, "Jumping Jack Flash" takes on messianic proportions. 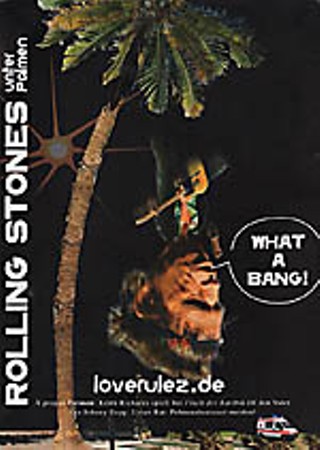 "I was drowned. I was washed up and left for dead.

I fell down to my feet and I saw they bled.

And I frowned at the crumbs of a crust of bread.

I was crowned with a pike right through my head."

If I ever return to Paris, it'll be trussed up and thrown in the trunk of a Renault. Abducted! "Sympathy for the Devil" evaporates steadily while spiraling down level after level of Purgatory in the Charles de Gaulle Airport. A shuttle careens us to an outpost train station 45 minutes from the City of Lights. A sulking Frenchman at the information tube mumbles derision at our queries. Javier thanks him as we exit.

"What did you say to that guy?" I wince later in an Eiffel Tower-situated cafe.

"I gave him the Deadwood salute," beams Javier.

Somewhere, Jerry Lewis sneezes Perrier. We roar laughter. A Parisian connection of Javier's has already applauded his friend's efforts at local reform. Racial unrest, vermin overrunning a national monument not 50 yards from our foie gras, head-butting a World Cup. "It Must Be Hell," closing 1983's Paris-tracked sex trader Undercover, must be a pronouncement.

Tourist-loving Munich produced both Black and Blue and It's Only Rock 'n' Roll, but the Gauls claim Exile on Main Street, plus last year's A Bigger Bang, while Paris birthed Some Girls, Emotional Rescue, Undercover, and Dirty Work. 2003's Four Flicks DVD: Paris' Olympia Theatre notches up live rarities "Worried About You," "The Nearness of You," and "Love Train." Another Undercover slasher screams "Too Much Blood."

"A friend of mine was this Japanese. He had a girlfriend in Paris. He asked to date her for six months and eventually she said 'yes.' He took her to his apartment – cut off her head. Put the rest of her body in the refrigerator and ate her piece by piece. Put her in the refrigerator. Put her in the freezer. And when he ate her, he took her bones to the Bois de Boulogne. By chance, a taxi driver noticed him burying the bones.

"Don't believe me? Truth is stranger than fiction. We drive through it every day."

Don't try that at the Stade de France. Take the subway, and let the police and military keep the Watts-like neighborhood at bay. This isn't the Paris of "Honky Tonk Women" from Get Yer Ya-Ya's Out ("strolling on the boulevards of Paris, naked as the day that I will die"), not a misty stroll through the Bois de Boulogne's central park playgrounds. It's Paris "Midnight Rambler" style. The knife sharpened tippytoe. The shoot 'em dead brainbell jangler. "Paint It Black" Paris.

The Stones whip out both seances. A conspicuous pair of Keith and Ronnie pantomimes down by the field foam at the mouth for the former, 10 blind minutes of black cat cloaks and cock'rel crows. Proud black panthers. Smashed plate glass windows and cold fandango. Out of breath, I wander the stadium's deserted food and swag perimeter during "Paint It Black," primeval still. A young teen, crumpled a few steps above a large, pizza-esque pool of vomit, snores. Paris wasn't even on the band's itinerary until they rescheduled Amsterdam.

Stones fans are like alcoholics. For life. Judging from the sea of global tour tees, Babylon to São Paulo and through the past starkly, Amsterdam never left rehab. Hang fire. Who knew?

That must explain all the "coffee" shops. Certainly the Stones bar, its neon tongue lapping up a main square, video monitors reliving Hyde Park. Led Zeppelin's "In My Time of Dying" bullfights the PA, but every other rumbler lights up the Stones pinball machine. "I Just Wanna Make Love to You," "Sweet Black Angel," "Carol." Two blondes next to us fire up a continental drift. 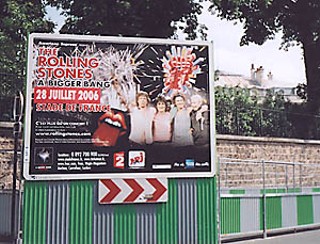 The boulevards of Paris (Photo By Raoul Hernandez)

"Maybe I'll become a playboy, hang around in gay bars, and mooove ... to the West Side of town. You're gonna get it straight from the shoulder, can't you see the party's over? Let me go."

Amsterdam Arena, the Last Time: "Bitch," "Sway." One last Keef twofer, scabrous "Before They Make Me Run," and just another dream, "Slipping Away" (both acquiescing currently to Tattoo You's "Little T&A" and Let It Bleed's "You Got the Silver"). Sir Mick's Bigger Bang, "Streets of Love" ("and I walk these streets for a 1000 years"), ripples tawny determination once again. "Rough Justice," never done and dusted. A final stock exchange moment down in the merchandise pits, elbowing for a conclusive souvenir to accompany a town-poached bootleg of my first Stones show in 1981 ("Under My Thumb," "20 Flight Rock," "Let It Bleed," "Let Me Go"). Got a refrigerator magnet for four consecutive Stones spectacles across three countries?

"The bell is rung and I've called tiiime ... The chair is on the table – out the door baby."

"Let's Spend the Night Together"

"Night Time Is the Right Time"

"Before They Make Me Run"

"Sympathy for the Devil"

"You Can't Always Get What You Want"