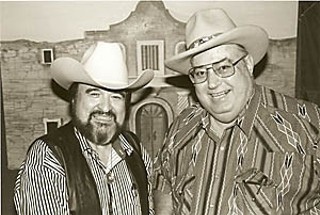 The Grand Ole Opry was obviously a huge deal for Don Walser. I don't know if it was because I was a journalist, but I got to sit onstage at the Ryman Auditorium the night Austin's king of country music made his debut there on Oct. 30, 1999 (see Live Shots, Music, November 5, 1999). My date, No Depression Australian correspondent Sophie Best, has always had big blue eyes; that night they seemed a little bit larger. She'd never been to the Opry before either.

We sat at the end of the stage pew, and they set up folding chairs next to us for Walser and his wife, Pat. As the show went on, a steady stream of well-wishers stopped to shake Walser's hand, and at one point, he was informed that Cindy Walker, the first lady of Texas country music songwriters, had sent him an enormous bouquet of flowers with her congratulations. He was moved to tears. When his turn came, Walser performed his signature tune, "Rolling Stone From Texas," and when he yodeled, you could hear the audience gasp, which resulted in a rousing ovation. Those are moments one treasures for a lifetime.

What follows are recollections of Don Walser from an intimate cross section of Austin, mostly country musicians, with the exception of one notable ringer (the Old 97's Murry Hammond). Think of it as a "Country Chorus," singing its praise for a man who never had a bad word to say about anyone and who spread bonafide wonder and awe wherever he went.

About three years ago, I opened for Don at the Satellite Lounge in San Antonio. It was one of his last shows. We all treated him like he was a god. He had to use alternate methods to get onstage, but once there ... he still wowed the crowd. I had closed my set with "I Want to Be a Cowboy's Sweetheart," and he told me backstage that it was the best version he'd heard since the original. I didn't take it to heart, but I still treasure knowing that Don Walser thought I did a good job.

We discovered Don in 1994, from a live tape recorded at the old Henry's by Rhett's "Uncle Ed" Miller. We were hungry for Don's pure distillation of old country music; we just fell in love with his sound and with him personally. The next year, we had a chance to record with Don in Chicago when he and the band were up there for a music festival. Don came in and yodeled on one of our songs and did a beautiful job, making one of our little dreams come true. Somewhere around that time, our guitar player's best friend remarked after talking with Don, "You know, Don Walser may just be 'The Nicest Man in the Universe'!" We all laughed but have always agreed that if such a title existed, it truly did belong to Don. I still count Don as one of our deeper influences, and I thank God that he walked among us when he did.

I loved to go see him at Henry's because he had quite a band. It was also refreshing to hear someone play Texas hardcore country and do it right. Eventually we became friends, and he used to tell me that I was his favorite singer in town. "When I'm gone," he said, "I want you to take over the Pure Texas Band." It was really nice that he wanted to pass that on to me. I don't know if I've ever met a gentler fellow.

Don Walser was a great friend to the Derailers. I always felt that he was the father of the Austin country scene. One of the most memorable gigs we played together was at Lincoln Center in New York City in '97 or '98. He opened and brought the house down. It made our job a little tougher, but we didn't mind one bit.

When I heard his first record, I said, "Whoa, that's a one-in-a-million voice." Don was wonderful and irreplaceable. His music was in my wheelhouse; he was my chance to produce someone from that bygone era, and I felt honored to be able to produce him. Yodeling is usually a trick, but for Don it was an art. Don was such a great singer, and the combination was incredible. He was one of those guys that had the great voice and all that, but he had this continence about him. He was like this Buddha. It's why the Butthole Surfers and those guys liked him: He just transcended time. He got along with people, he was funny, and he was so nice. I loved him. I'll always feel really good that he got his due.

I was so sorry to hear about Don Walser. I did a good number of gigs with him over the years and played on his records. He was the type of guy who, when you saw him around town, made you feel like you knew him forever. He was an amazingly talented and very real person. I appeared in the video they shot out at James White's ranch that went late into the night. It was so cold, but Don didn't complain once the entire evening. He was having such a good time. He was a happy person – that's what always struck me about him. He was very happy.

I wasn't a full-time member of the Pure Texas Band, but I'd sit in occasionally, at the Broken Spoke and other special gigs, like at the Opry. I had a background with Asleep at the Wheel, Waylon Jennings, Merle Haggard, and some Broadway stuff, but Don was a unique experience. He was equal in talent to anyone else I worked with. We've lost an American original, and he gave so much to all of us.

Don was very instrumental in me settling into the music scene in Austin. He was so welcoming. He was a gentle giant. When I first got to town, whenever he couldn't make a show for whatever reason, he'd have me take his place with his band, or I'd get something together to substitute for him. That was '91 or '92, and it helped me tremendously. Now, it's a loss you feel in the air. Even though he wasn't able to perform for the past couple of years, you definitely feel that he's gone. He was a Texas legend.

I first saw Don at Henry's on New Year's Eve in 1991 when I moved to town, and it was a revelation. Eventually I got to know him, and he'd invite me onstage occasionally to sing with his band. It was a great way of easing me into the Austin scene. Then I learned some of his songs, and I would sing them with his band. He always got a huge kick out of that. He'd be sitting in the front row giggling, with his big ol' belly, laughing. He was just so sweet and supportive. The thing that I hold dear about Don is that whenever I was around him, he always reminded me of the power of music and the effect it could have on people. It's a joyous thing. Every time I saw him, I was reminded of the majesty and power of music.

I played [bass] with Don for 15 years, and we played all over the world, the Olympics, the Grand Ole Opry, the Kennedy Center, the White House. We had a saying about Don. When you first come in, you see all these old people onstage, and you think you made a mistake. But in 30 minutes, he's got you. He had such a voice that he would do one song in that time that would blow you away. We always used to joke about Emo's with the tattoos and nose rings, but they loved Don Walser. It was fascinating. I'm playing with three or four bands these days, but, taking nothing away from their talent, it just isn't the same.