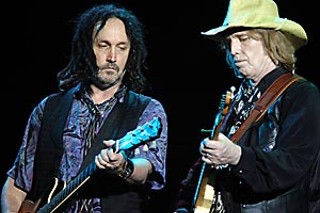 The Heartbreakers are still a couple of hours off, but the Flaming Lips' Wayne Coyne is explaining to an enormous, anticipating crowd how the rain has a way of disappearing for the Lips only to return moments later. Unfortunately for Tom Petty, he was right. Before the clouds rolled in, Petty and his Heartbreakers strolled onstage beneath the thunder of 60,000 fans. Looking a bit more weathered than last we saw him, the Hall of Famer ripped into opener "Listen to Her Heart." His white teardrop Vox twanged alongside Mike Campbell's lead guitar as follow-up "Mary Jane's Last Dance" fired up. Campbell looked more Rasta than Heartbreaker, his beaded Keith Richards dreads sticking to his face. Meanwhile, Petty hints for crowd participation before a chilling "Free Fallin'," and the sing-along happens willingly. This is the moment you hope for, a moment of singularity among tens of thousands. After a glimpse of Petty's new Highway Companion ("Saving Grace"), the rain teases, and with Scott Thurston's first Roy Orbison refrain in the Traveling Wilburys' "Handle With Care," the sky opens up, and the stage shuts down. By the time the 45-minute rain break ends, only the true blue remain. Midset breaks do little for momentum, but hanging in slow and low, the Heartbreakers ease through Wildflowers ("It's Good to Be King," "Cabin Down Below"), Into the Great Wide Open (a slow, acoustic "Learning to Fly"), and finally "Refugee" and "American Girl." A three-song encore, cemented by Petty's "Runnin' Down a Dream," ends with the last notes of "You Wreck Me" bouncing through a wet Zilker Park as the Heartbreakers take their bows. Petty seems content, gracious, even. "We'll see you down the road," he grins into the mic. We sure hope so.