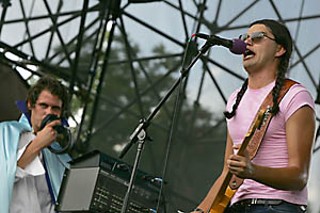 Any lingering hopes of a midafternoon nap harbored by the kiddos were obliterated almost as soon as Ghostland Observatory took the stage. In a tight pink muscle shirt and circulation-threatening jeans, Aaron Behrens looked not a little feminine sweating away under a humid sun – which is not to say that even with his hair in plaits, the high-singing dude ever lacked huevos. In short order, the Austin-based Observatory cleared the air of remnant Centro-matic jams wafting across the greens and single-handedly boosted the threat of global warming to the red zone. During a pulse-pounding, hour-plus work-out that would make RuPaul blush, Beherns slung a guitar, popped, rocked, and writhed like a snake on a stick, while bandmate Thomas Turner proudly wore a powder-blue cape and showed what it means to be a hometown superhero. Bringing the mix to the max with bone-crunching synth, the duo likewise laid to waste any divisions you might mistakenly imagine persist between rock and disco. Having displayed face-melting mettle on a dozen tracks, including the trash-talking "Sad Sad City" and spaced-out jam "Stranger Lover," both off 2006's Paparazzi Lightning, the dance party was too soon over – and, somehow, a new day was just beginning.