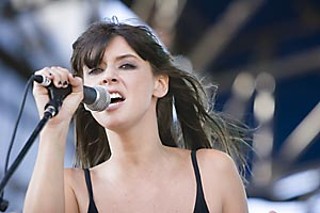 Two songs in, and Chan Marshall hasn't yet appeared onstage. Is she pacing backstage? Hell no. This is the refurbished Cat Power, off the bottle and on the level. She creeps onstage, smiling and looking gorgeous. "The Greatest" emphasizes the talent behind her Memphis Rhythm Band as Marshall mimes along with the lyrics. Where she used to hide behind a piano, she now beams at the crowd. "Living Proof," the second from The Greatest, conjures Charlie Chaplin, before "Empty Shell" reads like an autobiography: "Try to pretend to laugh when she does stupid things just like I used to do." Gnarls Barkley's "Crazy" spontaneously mixes old with the new, followed by Moby Grape's "Naked If I Want To." Barefoot and happy, Marshall's vox hits "(I Can't Get No) Satisfaction," more powerful than the solemn version on The Covers Record. Bringing only one track from Moon Pix ("Cross Bones Style") and one from You Are Free ("I Don't Blame You"), Marshall remains solo on stage with the electric piano. Beckoning her band back for a cappella jazz standard "I Can't Give You Anything but Love, Baby," Cat Power and sobriety mix well.