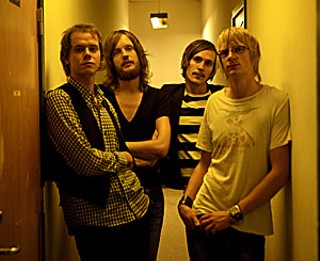 The Blue Van's entourage of garage rock sounds like it was cryogenically frozen in the Sixties and revived in the present. "It has mojo," contends Soren Christensen, the comptroller of keys for the group.

The band's shagadelic debut, The Art of Rolling (TVT), answers the question, Who's Next? A vintage Hofner guitar riffs through The Kink Kontroversy; a Hammond organ breaks on through to the other side; frantic, hysterical drumming awakens Keith Moon, while analog-tape reels capture the audacious live atmosphere of the MC5 at the Grande Ballroom. It's a time-irreverent cacophony the group calls "barbed-wire music."

"Danish bands in the Sixties used that term to describe their music when they were influenced by all of the English and American bands before the term rock & roll was really used," Christensen explains. "That's how we still feel."

Don't expect a drastic change of course in the band's follow-up, Dear Independence, due Oct. 10. From the revolving Beatle-esque effects of "The Poet Tree" to drunken pub sing-along "Momentarily Sane," the Blue Van wears its barbed wire like a badge of honor. "It's wider and broader, I'd say, and there's a lot more acoustic stuff and soul inspiration," Christensen reveals. "The heart is still in Sixties music though."

Despite the Blue Van's retro swag and mop-top haircuts, the band doesn't actually long to live in the swinging Sixties. "Don't get me wrong; I'm pretty happy with my cell phone and Gatorade," Christensen insists. "But everyone has their inspiration, and that's just the type of music we fell in love with."