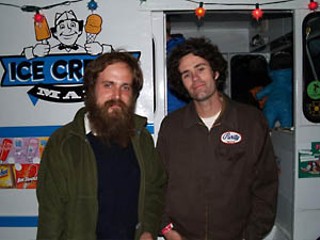 "He's got a couple kids, and if the family is around they'll usually stop by for some goodies."

"Even though we carry kosher and have camped next to him, I still don't think he's taken us up on the free ice cream yet. His drummer Jonah David likes most of the treats though."

"Joey [Burns] and John [Convertino] both dipped into the secret Reese's stash at Lollapalooza."

"I think I gave him ice cream at an in-store at Fingerprints in Long Beach."

"I hooked up the band through the back door before they headed over to the stage they were playing on at Lollapalooza."

"At the Pitchfork Festival he said he didn't eat many cold things because it affected his throat. He then proceeded to pull a bottle of hot sauce out of his pocket and take a chug. Soon after that, he gave in and had a Great White Lemon Ice Popsicle."

"At Sasquatch! 2005 they ate more ice cream than any other band. Don't think I've seen them since then, so hopefully they'll stop by the truck."

"Daniel [Lorca] mentioned something about being picky about combining foods and wanted to make sure his ice cream had his undivided attention."

"I gave Torquil [Campbell] some cream at Lollapalooza and then told him his shirt, which stated, 'I miss Grant McClennan' was pretty damn cool."

"The bass player, Dave [Hernandez], used to be an ice cream man in Albuquerque, N.M."

"The band was at All Tomorrow's Parties in Long Beach, the first festival we slang at."

"We gave Ben, Laura Dern, and their son some ice cream at Sasquatch! Festival."