What's So Funny About Peace, Love, and Ice Cream? 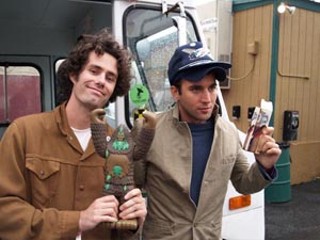 Matt Allen has served them all. Since 2004, he has trekked more than 15,000 miles from his Southern California headquarters in a 1969 Chevy Stepvan, christened "Bessie," to hand out free ice cream at the country's largest music festivals. In other words, Matt Allen is not just an ice cream man. He's the Ice Cream Man.

"The term has over 50 years of goodwill attached to it, yet there's no face; there's no image, no brand, no company, no logo, there's nothing," cries Allen. "My idea was that I could make myself Ice Cream Man so that when people think of ice cream, they'll think of me, my logo, my company."

This week he adds the Austin City Limits Music Festival to his roster.

Allen was aboard the Queen Mary when a then-unknown Wolf Parade was unceremoniously kicked off the ship for reckless behavior (hence the name of the band's Sub Pop debut, Apologies to the Queen Mary). He distributed ice cream outside the Beastie Boys surprise gig at Stubb's during SXSW in March. He was backstage at Bonnaroo when Stevie Nicks joined Tom Petty for "Stop Draggin' My Heart Around." At Wakarusa, he was an enchanted alien extra on stage, dancing to the Flaming Lips' "Yoshimi Battles the Pink Robots Part Two." Most recently, he was the reason Jack White of the Raconteurs told 40,000 fans at Lollapalooza that there was free ice cream at the festival.

"People grow up and think they have to give up the things that made them happy when they were younger," says Allen, who has, to date, given away more than 50,000 frozen treats. "That makes absolutely no sense to me."

Allen, who won't disclose his age but must hover around 30, is the quintessential Toys "R" Us kid. He finds happiness in life's small wonders. He plays kickball; he does the happy dance. With free-flowing floppy hair and thrift-store threads, he resembles an elementary student allowed to pick his own outfit for the day. His venture, meanwhile, has grown from a one-man operation into a roving national network of like-minded individuals and companies who support Allen's desire to change the world one smile at a time. 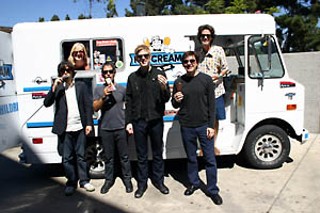 In many ways, he's the last great explorer; a wonderer who gets by on kindness and karma. He has hiked the Appalachian Trail from Georgia to Maine and the Pacific Coast Trail from Mexico to Canada. He went on a cross-country roller coaster trip, conquering almost 100 in 30 days. When his mother was diagnosed with breast cancer in 2001, he biked from his hometown in Long Beach, Calif., all the way to Maine to raise money for cancer research. Some people send postcards from the places they visit; Allen creates hubs, spreading the vision of Ice Cream Man to all he encounters.

The enterprise began as a summer job while attending college in Durango, Colo., and consisted of a three-wheel bike, a cooler, and a boom box. After graduation, Allen pursued his Willy Wonka dream of working at a chocolate factory in Ashland, Ore., before buying Bessie for $1,200 and becoming "a classic ice cream man," more Jonathan Richman than Tom Waits or Van Halen, "trying to make a buck in your typical Americana town."

After a difficult first full season of serving, he threw an ice cream social to clear out inventory, but the overwhelming response triggered an epiphany.

"There was a line the length of a football field, all ages, waiting for free ice cream, and everyone was just so happy," Allen recounts. "If I'm not going to make any money selling ice cream, why not find a way to give it away?"

Ice Cream Man returned home and began seeking sponsorships, on a project-by-project basis, to cover the cost of slinging cream at local events like Coachella and ArthurFest. The equation itself hasn't varied since: more sponsors, more free ice cream. Consequently, Allen name-drops sponsors the way musicians do release dates – Guitar Center, Fruitiki, GameFly, Capitol Publishing, Jakprints, Rhapsody, Julie's Organic Ice Cream, Mochi Ice Cream – while Bessie doubles as billboard. The business is based on an attempt to break even, but that's no picnic.

"I'm living in my mom's house right now," Allen wails. "I sold my 1969 Chrysler Newport. I've sold nearly everything I've owned to make this happen, and it's still going. 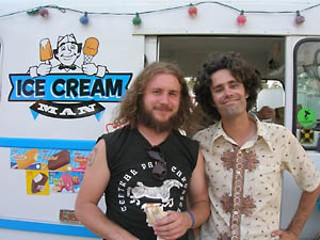 "The purpose is to show people that nontraditional business ideas can succeed; there are ways to do it. You can achieve your dreams. You can love your job. You can make a difference. I want to live by example, to inspire and motivate people to do things."

Before heeding the call of the Ice Cream Man, Allen, spurred by late-night ventures to Sam's BBQ on a visit to Austin, moved here to help reopen the Hole in the Wall in 2003. As general manager, he, along with Paul Minor, booked a batch of shows, including a double bill of Scott H. Biram and Daniel Johnston, to celebrate the club's 30th anniversary. Shortly thereafter, the relationship melted, and he left both the Drag-bound live music venue and bar, as well as Central Texas.

He's kept his foot in Austin's door ever since. For SXSW 06, Allen utilized both the Hole and Cream Vintage to throw one huge, scrumptious ice cream social that featured intimate performances from Islands, Two Gallants, Mazarin, and Envelopes, to name a few.

"I never just want to go to something," Allen says. "I want to contribute; I want to be a part of what makes it special."

Ice Cream Man's hub here in town remains one of his strongest. A crew of roughly one dozen volunteers has helped with everything from local show reviews for IceCreamMan.com, to tossing ice cream from the main stage at the Sasquatch! Music Festival in Washington's Gorge. "It feels like a collective kind of deal, like we're all part of something much bigger than just music or ice cream," says Aaron Zachs, a graduate student at UT and frequent Ice Cream Man contributor. "I support Matt in whatever the hell he chooses to do."

While Allen's trying to work out deals with some of his routine sponsors for this weekend's ACL Fest, like Julie's Organic Ice Cream and Fruitiki, he's craving Austin's famed Amy's Ice Creams in his van's freezer. "I've always given away single-serve treats, but I've never scooped ice cream from Bessie before," he admits. "If we had Amy's on board, I'd eat a boatload of it.

Most nights, Allen strews an inflatable mattress over the freezers in his ice cream truck and falls asleep. "You find ways to make it happen," he shrugs. "You sleep on the side of the road, sleep at Wal-Mart, sleep at rest stops, get kicked out of parking lots at 3am 'cause you're not supposed to be there. It's life."

It's a miracle Allen even makes it to each festival. Bessie has neither air conditioning nor cruise control, and in the last year the vehicle has needed a new ignition system, carburetor, engine, brakes, radiator, and tires. For each city he travels to, Allen must track down enough ice cream to dish out and garner the necessary permits to do so.

At Bonnaroo, the nation's largest music festival, Bessie was feeding the frenzy from the backstage bonanza, Lewis Black knocking 'em down at the open bar, Thurston Moore and Stephen Malkmus dining together in the catering tent, Steel Train practicing their swings in the batting cage. Security guards lined the gates armed with Bomb Pops. Disco Biscuits, Magic Numbers, Devendra Banhart, and Clap Your Hands Say Yeah all hovered around the truck, a clear kinship felt between the Ice Cream Man's grassroots approach and their own DIY principles. Allen was like a kid at recess, enthusiastically greeting each passerby. His smile never faded as the words "free ice cream" stopped most everyone dead in their tracks.

"We show up and give away thousands of free ice creams at no cost to the promoters," Allen explains. "We give it away to everyone who makes the festival possible: security, staff, artists, everyone. All we ask is to be taken care of with passes for our crew, writers, and photographers."

The system never fails. Over the course of three days, Ice Cream Man gave out more than 2,500 treats while his crew – three photographers, three staffers, and a pair of writers – took more than 7,000 digital photos and penned reviews of nearly every performance for the Ice Cream Man Web site (www.icecreamman.com). For his loyal volunteer staff, the experience pays for itself, and very well.

"It's a once in a lifetime opportunity to be there and to shoot Tom Petty," says Jeremiah Garcia, a professional photographer whose work for Ice Cream Man has been picked up by Vice Magazine and Arthur Magazine. "There's room to do anything you want or can do, and when he can repay you, he will. It won't be monetary, but you'll be paid back tenfold. This past year has been the best year of my life."

The Rocky Road to ACL

If smiles are contagious, it's no wonder people like Lollapalooza and ACL promoter Charles Attal are eager for another visit from Ice Cream Man. "How could you not have great things to say about a guy who gives away good, free ice cream?" ponders Austin's Attal. "I'm still wondering what the catch is."

The catch, of course, is that there isn't one, and slowly large businesses are beginning to covet Ice Cream Man's chocolate-coated philanthropy. Toyota recently converted two Yaris hatchbacks into tricked out "Bessitas" that dish the goods at the company's various promotions. "These vehicles get three to four times the gas mileage and can hold 400 pieces of ice cream and additional coolers, which we could put more ice cream in if need be," Allen enthuses.

Though life behind the wheel may soon become a bit more comfortable for Allen, the road goes on forever for an ice cream man. "These sponsorships barely cover our costs, and it's for a very short period of time," explains Allen. "I don't know how it's going to work. Rock & roll and being backstage was never a part of the initial plan."

That hasn't altered Allen's goal of distributing half a million frozen treats or his dream to take Ice Cream Man overseas.

"Either you go through your life thinking you can change the world or thinking you cannot," posits Allen. "If those are the only two options, how can you not at least try?