All I Have Is a Photograph

Things have a way of accumulating around newspaper offices: back issues, dirty dishes, broken computers, promotional swag, and especially photographs. Our music office alone has several filing cabinets and boxes of photos, thousands of pictures of bands and shows now forgotten by all but the subjects, and sometimes even by them. This batch comes from former Chronicle shutterbug Michael Crawford, later a video journalist for both KVUE and KEYE, and span, roughly, the years 1994 to 1996. These were TCB's first years as an apprentice Chronicle freelancer, but more importantly, they were crucial years for the local scene: This was when bands emerged from the blissful haze of the Slacker years to realize they might actually be able to make some money. Not much, maybe, but enough to cut back on their hours at Wheatsville a little. Luckily, the music was (and is) still a lot of fun.

Equally revealing are the shots that barely missed the cut: Gibby Haynes reclining inside a black, hot-rod Lincoln; the Furry Things flinging Wonder Bread cameraward; Johnny Motard jumping out of his skin; Siouxsie Sioux holding court at the brand-new Austin Music Hall. The nine featured here aren't necessarily better, per se, but in some way each is a slightly sturdier plank in the bridge between then and now.

SIXTEEN DELUXE: Much more than space rock, Sixteen Deluxe's incandescent fuzz-pedal pop electrified the town when it appeared in 1994. No band could have withstood the flurry of hype that followed, but they stuck it out until 2000, and Austin still shines a little less brightly without them. 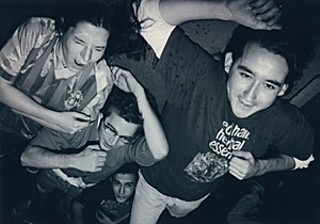 GERRY VAN KING: The once and future "King of Sixth Street," who got special consideration in the cops' crackdown on street musicians, still holds court outside the Parish almost nightly.

BLORT: Masked men with bloody fingers are always cool, and in much shorter supply these days.

REBECCA CANNON: Whether swallowing microphones with Sincola or crooning "Swinging Doors" with the Texas Sapphires, Cannon remains one of Austin's most charismatic and compelling frontwomen.

JAY HUGHEY, MIKE HENRY, MARK SHUMAN: Until 1999, these three ran the Electric Lounge, where Prescott Curlywolf, the Gourds, and Grand Champeen were born; the Damnations, Spoon, and Wannabes grew up; and Asylum Street Spankers, Spiritualized, and Joan Jett, among many others, fractured the fire code. RIP.

PATRICE PIKE: From conga-banging Little Sister to Austin's favorite CBS personality, Pike has been a rock star, and supernova, from the Black Cat on.

DON WALSER: Before he took ill, the rolling stone from Texas' unearthly yodel was equally at home at Emo's and the Broken Spoke, and his smile could light up entire South Austin neighborhoods all by itself.

POCKET FISHRMEN: They were never this clean-shaven again. Pocket FishRmen's big dumb sex combined punk and metal in a way that emphasized what grunge lacked: a sense of humor, best seen in madcap costume choices that kept even their most die-hard fans gasping. We think the guy at right is now on TV somewhere.