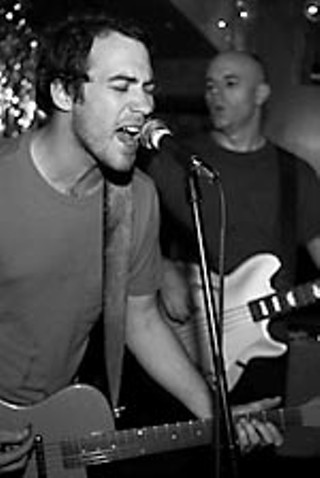 TCB is back from 19 grueling days on the road with Moonlight Towers, and he never wants to see those disgusting douchebags ever again. Just kidding. He'll be front and center at their homecoming show Saturday at Beerland with Brothers and Sisters, John Schooley's One Man Band, and John Wesley Coleman. Happy birthday, Billy! While we were out, TCB noticed that his Austin friends and neighbors, seeking to escape the oppressive August heat, seemed to be floating the entire live-music economy of the western United States. The window of Plush in Tucson alone advertised no less than four upcoming Austin shows: Towers, Brothers and Sisters – who were two or three days behind us throughout – Grand Champeen, and the Asylum Street Spankers. Two nights after Towers played, Marilyn's on K in Sacramento hosted "Austin Nights No. 1" with "Grand Chapman" (who canceled) and Jon Dee Graham. We stayed at Portland's Jupiter Hotel, where What Made Milwaukee Famous were due at on-site club the Doug Fir Lounge the next night. (Their reworked Trying to Never Catch Up dropped Tuesday on Barsuk, with a Waterloo Records in-store 5pm Friday and Beauty Bar release party later on.) Last Tuesday, Towers, Ghostland Observatory, and WMMF all hit Seattle, where a poster at the Sunset Tavern also touted an upcoming visit by Scott H. Biram. The doorman at Neurolux in Boise wore a Broken Teeth T-shirt; Jason McMaster's metalmongers had been there two weeks prior. And of course, you couldn't swing a dead cat in Lawrence, Kan., last weekend without hitting an Austin musician in town for the third annual North vs. South Music Festival. Read on... Though Moonlight Towers rolled into Lawrence a little too late for TCB to see much else at North vs. South, founder and former Austinite Mike McCoy (Cher UK, American People) says this year was the best yet: "I think we're getting real close to what we're shooting for." It was also the biggest, with 50 bands from Austin, Minneapolis, and the metro Kansas City area spread over six stages in five clubs. McCoy only booked two nights this year to accommodate his pregnant wife, but says he'll expand it back to three in 2007. Furthermore, "Crawling With Kings rules," he says. "That's all I'll say." At Saturday's wall-to-wall afterparty at McCoy's house, former Hüsker Dü drummer Grant Hart, Ethan Azarian, and members of Grand Champeen, the Summer Wardrobe, Pong, Til We're Blue or Destroy, Masonic, and Magnet School milled around, enjoying the kegs of beer and envelopes of money McCoy was handing out. In the garage, Austin's Hunter Darby, McCoy's bandmate in Service Industry, offered some belated touring advice. "Always shit in banks. The bathrooms are super nice, and sometimes on the upper floors there are sofas you can sleep on."

Also while Moonlight Towers were out West, TCB had the pleasure of meeting SideOneDummy Records co-founder Joe Sib, whose Complete Control radio show has now been blitzkrieg-bopping L.A.'s Indie 103.1 airwaves for two years. Austin's 101X picked up the show in March, and the host has a long history with our town. "I played the Ritz with Verbal Abuse back in '86," says Sib, who also played Emo's many times with his band Wax, best-known for Spike Jonze's burning-man video for their song "California." "I love Austin," he says. "Everybody's always been really cool to me there." His fondness shows up in CC's playlist: The very first song he spun on the show was the Big Boys' "Fun Fun Fun," locals the Krum Bums and Complete Control get regular play, and he calls the new Riverboat Gamblers album "one of my top five records of this year." Other stations pooh-poohed the idea of punk rock on commercial radio until Indie bit, but Sib knew different. "I think bands like Social Distortion, Minor Threat, and the Misfits are to some people now the Zeppelins and AC/DCs of their generation," he says. Sib tries to maintain a 60/40 split between new and old music and otherwise picks each week's songs mostly at random: "It pretty much depends on how many beers I've had the night I do it." Complete Control airs thrice weekly on XM Radio's Fungus 53 and on 101X right after Andy Langer's Sunday-night staple, The Next Big Thing, at 10pm.

Fairly or not, Patrice Pike has become a regular in Rockstar: Supernova's weekly bottom three but continues to hang on. She was back again last week, after her acoustic performance of the Police's "Message in a Bottle" didn't quite click. The judges chided Pike for lacking intensity: "I know that a hell of a performer is right inside you, and that's what I want to see every time," said co-host Dave Navarro. Last Wednesday, Pike chose Hole's "Celebrity Skin" as her bacon-saver, and it worked. "We believe you have potential for Supernova," drummer Tommy Lee told her. That should play in her favor as the contestants begin doing original material; Pike squeaked into the lucky seven as, finally, Supernova cut Dallas' frightful Zayra. The winner will be crowned Sept. 13 on CBS, and Pike's first post-Supernova gig comes at the Austin City Limits Festival, 4pm Sept. 17 on the Austin Ventures stage.

• Paul Minor has resigned his everyday booking duties at the Hole in the Wall. "Maintaining the daily calendar and acting as middleman for all the bands was adversely affecting my health," he says. Hole owner J.D. Torian says the split was entirely amicable and that Minor will periodically book shows at the club under his Minor Productions banner. The restaurant in the former Aztec Screen Printing building is now open, and a stage in the beer garden for acoustic-based earlier shows is under construction and should be ready in about a month. "Live music will remain a major part of the Hole as long as people continue to support it," says Minor, who plays solo at Jovita's 6pm Tuesday.

• North vs. South alums the Meat Purveyors will probably play one more Austin show after their Sept. 9 Hole in the Wall gig, says guitarist Bill Anderson. Stand-up bassist Cherilyn DiMond is departing to marry Sweatbox Studios owner Mike Vazquez, and the couple plans to search for a new Sweatbox location. As for the Purveyors, "The rest of us would rather just do something else than try to replace her," Anderson says. "At least everyone still likes each other this time around, as opposed to our last breakup."

• The White Ghost Shivers, who have secured the Austin Music Hall for their annual can't-miss Halloween ball, get all classy Saturday for an 8pm concert at the Austin Lyric Opera's Ducloux Hall. Tickets are $10 or $30 for the special VIP afterparty. Alongside Guy Forsyth, the Texas Sapphires, and youngsters NewBoy, the Shivers do double duty at Sunday's free Chronicle Hot Sauce Festival in Waterloo Park, for which all the bands have been taking first-aid classes to assist with all the heatstroke cases. Gates at 11am.

• Zilker bits: This year the ACL Music Festival's shuttle location moves from Waterloo Park to Republic Square Park at Fourth and Guadalupe. And Stones tickets are still on sale.