Tweet
print
write a letter
Don't raise those hackles quite yet. After all, everyone loves it when the teacher calls in sick. While TCB travels west with Austin's Moonlight Towers, the news still flows. Just think of me as a sub. "The B-Side" is my answer to Austin music news, and you might see this column from time to time in the future. For now, flip over TCB and play the B-side. It's usually good for a surprise or two. Got news? Send it to dstevens@austinchronicle.com. 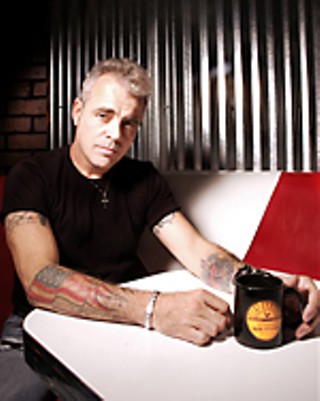 After seven months in the decidedly un-Texan city of Baltimore, Austin's Dale Watson is back and ready to roll. Watson made the northern trek in January to help his girls, 7 and 13, settle into their new home. "They say kids are resilient," Watson grins. "But they acclimated quicker than I ever hoped they could." Things quickly got back to normal after his July return, with Watson settling back into his Ginny's Chicken Shit Sunday/Continental Monday gigs with various Friday shows. This time, however, his weekdays are devoted to the girls. "Continental Airlines has been helping me out," Watson says. "I play for their Blue Harbor Foundation, [supporting] mental-health awareness, in exchange for flights for my kids or me. Plus, it's something I would be involved with anyway." Zalman King's long-awaited film Austin Angel, staring Watson as the title character, is slated (once again) to begin filming next January, and Watson just finished recording an album with his friends in Johnny Knoxville's Tennessee cabin, which once belonged to the Man in Black himself. "Every song I was writing had that Johnny Cash vibe, and I said, 'Oh, no, no. I don't wanna do this. I'll catch all hell if it ends up being this copping-Johnny Cash record.' ... But I decided I was going to quit fighting it. Why would you go to a cabin with that type of vibe and come back with songs that you would've written anyway?"

Austin rocker Patrice Pike is holding her own on Rock Star: Supernova. Despite winning the chance to perform with drummer Tommy Lee on Stevie Wonder's "Higher Ground," the tattooed beauty still landed in the bottom three. But nothing mends like Jeff Buckley. Pike's performance of "Eternal Life" gave her a little of her own, and she continues to week six. Rock Star airs 8pm Tuesday and 7pm Wednesday on CBS. 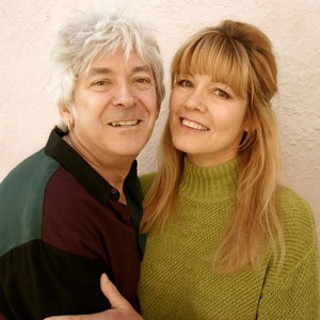 At press time last week, word came over the wires that the beautiful Kim McLagan was killed Aug. 2 in an automobile accident. The 57-year-old owner of K.M. Skincare in Smithville and wife to local keyboardist Ian "Mac" McLagan leaves behind a legacy of kindness. "The word that keeps coming up is angel," says longtime friend and KGSR Program Director Jody Denberg. "She was indeed angelic. She was a healing person – both through her profession and as a friend. Once the sadness subsides, that's what she will have left behind: beauty." After rising to fame in 1960s London as a model, Kim married notorious Who drummer Keith Moon and appeared in the Beatles' video "All You Need Is Love." After divorcing Moon in 1975, Kim and Faces member Mac married in 1978 and moved to the Austin area 16 years later. They lived on 10 acres in Manor where Kim tended to her garden. "Even though she was on the Beatles' BBC broadcast and subsequent video and married to one of the Who and one of the Faces, you'd never know it," Denberg says. "She was a grounded angel, a contradiction in terms." Denberg relates that Mac is doing as well as can be expected, and he's receiving support and phone calls from around the globe (Pete Townshend, Keith Richards, Bonnie Raitt). A ceremony was held Tuesday at Zilker Park in Kim's memory. Share your thoughts at www.ianmclagan.com; donations can be made to the Women's Advocacy Project (www.women-law.org) and mailed to RajiWorld, 806-A W. 10th, Austin, TX 78701. Our thoughts are with Mandy Moon, Kim's daughter with Keith Moon, Mac, and the rest of the McLagans' extended family. 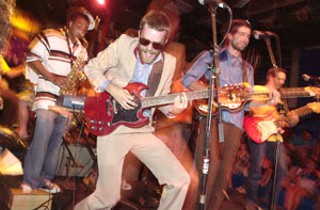 Down by the C-Side

Once upon a time, music was about expression, an escape from life while expounding upon it. The last decade has seen that drop by the wayside in favor of image, but last weekend's C-Side Showcase at Flamingo Cantina went back to the old-school. Founded in 2002 by Matt Pittman and Austin band the Channel, Round Rock's C-Side Records sponsored a show Friday that did just that. Chris "Grizzle" Gregory and his troupe of nonchalants in fellow C-Siders Golden Bear became invigorating with the addition of the Royal Forest Horns. All dewy-faced and bright-eyed, the band bounced through organic pop songs off their eponymous debut, leaving only one question: Where did these guys come from?

"[Golden Bear and the Channel] have both been around for five years or so," Pittman replies. "They're truly unique and wonderful people, who are putting their heart into their music." That sentiment blasted contagious in "Ten Thousand Orchestras," as a room full of friends and strangers beat the air in unison. Half of Golden Bear, plus a few friends, went on last as the country-tinged Channel, a bit more discombobulated than the Bear but with no pretension or formula. Their new double LP, Tales From the Two Hill Heart/Sibylline Machine – the fourth for C-Side – is an exercise in theory, genres overlapping fragile, eclectic sounds.

"I wish I had the money to properly promote and market these records," Pittman says. "Realistically, I just hope that we make enough of a wave that some more-established indie label will decide to give our artists a pleasant home on their roster. It would be bittersweet for me, kind of like watching your kids leave home, but I'd be very happy for the bands. They deserve something better."

• Tickets for the Rolling Stones' Oct. 22 show at Zilker Park go on sale Saturday, Aug. 19, 10am. But it'll cost ya: General admission tickets are $95, with student tickets at $75. In other Stones-related news, Ruta Maya presents Get Yer Ya-Ya's Out With Sticky Fingers this Saturday, a Stones hoot night with Zykos, the Arm, Lomita, Household Names, King Tears, and more, plus old Stones footage. See Music Recommended, p.92, for more information.

• Arthur Lee of seminal L.A. psych band Love died Aug. 3 in his hometown of Memphis after a long battle with leukemia. The explosive frontman, kindred spirits with the late Syd Barrett and Austin's Roky Erickson, made history with 1967's Forever Changes and spent the majority of his life making music with both Love and solo. From 2002-2005, Lee toured successfully with a reunited Love.

• San Antonio tenor sax player Rocky Morales of West Side Horns and Doug Sahm's Sir Douglas Quintet passed away last Wednesday of cancer. "Of all the musicians I've met in Texas, Rocky was the heaviest," Neil Young staffer Bill Bentley relates. "The things I saw him do during the Seventies with Doug are unforgettable. He was also the craziest of them all – lived on Mad Dog 20/20 and a hamburger he'd keep in his pocket for a week until it was time to take a bite. When he played tenor, it was like watching God onstage. What a man."