In search of Manu Chao 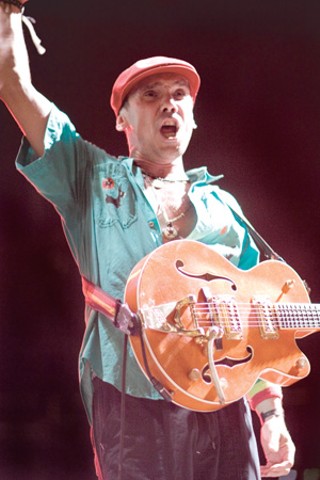 Mama was queen of the mambo

Papa was king of the Congo

Deep down in a jungle

I started bangin' my first bongo

In my place instead of me

Cause I'm the King of Bongo,

I'm the King of Bongo bong

Maybe it was the cerveza, but on a bullet the blue sky whim, I turned to the couple seated next to me – two of 80,000 to 85,000 U2 expectants at Camp Nou soccer stadium in Barcelona last August – and asked if Manu Chao lived there. Two amused smiles gave a shrug.

"I hear he splits his time between Barcelona and Paris," said one en español.

One sunny day, an exotic-looking promo appeared atop the CD player: Puta's Fever by Mano Negra. With subtitles: Whore's Fever by Black Hand. Virgin Records. (Major labels have been suspect since Louis Armstrong signed to Columbia.) No one had heard of them, but name and title alone guaranteed the disc at least a spin. Which is precisely how at least one part-timer went home that night infected with "Mala Vida." By employee-buy-Friday, Puta's Fever had found a host in the suburbs.

Immediate was the Clash. Where the last gang in London Town rolled their rock with reggae, Mano Negra's metallic punk split open a Basque-like musical piñata: fiddles, accordions, horns, raps, chants, and jungle-cries in French, Spanish, English, Arabic, and God knows what else. A mosh pit had opened at the Moulin Rouge; London Calling from a Parisian brothel, If I Should Fall From Grace With God covered by gypsy punks Gogol Bordello. You had fuck-all clue what they were saying half the time, but the sheer fervor screamed politics with a capital Che Guevara. And they were bleeding profusely.

Amputated at the heart, "Mala Vida" and "Pas Assez de Toi" remain Puta's Fever's gallows pole. Desperate love songs, one in Spanish, the other in French, their teeth-rattling tenor surges irrationality through desire's electric chair. Both open with a folksy, acoustic strum before lowering the boom, "Mala Vida" a breakneck chariot race of trumpets, third-rail guitars, and stampeding beats; "Pas Assez de Toi," sawed in half by an electric violin and an armored rhythm blitzkrieg.

Again, language barriers are negligible, though experts have been consulted over time. Gitana meant "gypsy," according to my father about the former track, while a Parisian Austinite was consulted just last week about "Pas Assez de Toi." A sad look, slow shake of the head, and confirmation of the song's insanity.

"He uses a lot of slang," says Françoise. "But the lyrics are great, the rhyming."

Mano Negra's Joe Strummer – Manu Chao – guilty as charged. Several nights before U2's Barcelona birthday bash for the Edge, Babylonia en Guagua had pogoed furiously in my home DVD player, "Mala Vida" going for the throat of 17 years ago. Chao, a solo artist since 1999's redefining Clandestino, made the trip in my headphones, international songs of protest lulling me to sleep every night in Gaudi's city of blinding hallucinations.

I went to the big town

Where there is a lot of sound

From the jungle to the city

Looking for a bigger crown

So I played my bongo

For the people of big city

But they don't go crazy

When I'm bangin' my boogie

Maybe the first and last place on Earth you'll find Hot Pants, Manu Chao's pre-Mano Negra debut album, is at the Virgin Megastore on the Champs-Elysées in Paris. A store clerk has taken pity on the hapless tourist hiccuping pigeon French and led him over to the Chao section. Nada.

He nods, expressionless, and walks back to the floor rack, flipping through "H" until, as if in slow motion, his arm arcs into the air over his head clutching a disc. Last one. All that's missing is the big brass fanfare from "Mala Vida."

Heard for the first time under the south arch of the Eiffel Tower, on a steamy, late-July Friday that the Rolling Stones are starring at the Stade de France, Hot Pants is Chao's big bang. Alias "Loco Mosquito," the 1986 local release charts Oscar Tramor's musical prime elements. His Galician father, writer Ramón Chao, and Bilbaon mother left Spain for the more liberal child-rearing climate in Paris. The music revolution across the English channel did the rest.

"African Witch" opens Hot Pants in English, the singer's cockroach with a cold delivery instantly recognizable, but follow-up "Chicken Chat," double-timing the Clash's "Should I Stay or Should I Go" riff, anticipates Mano Negra's maniac bounce. "Ay Qué Dolor!" ("Oh What Pain") thrusts up Gipsy Kings skank, while the twangabilly "Gipsy" acts as the Parisian quartet's long black Cadillac. "Brand New Cadillac," rather. "Come On" isn't Chuck Berry or the Stones, but is cut from the same flag. Chess Records can collect royalties on the solo.

Just before Hot Pants fades into roots obscurity ("Craw-Daddy," "Junky Beat"), "Ya Llego" arrives. With uncanny timing, the mariachi rave-up's "policia" give way to whistles and gunfire at the precise moment two fatigue-clad soldiers wielding automatic weapons materialize from out of the Eiffel Tower's tourist morass. By the time "Can't Let It Down" closes the 32-minute album with a police-siren motif, Chao's musical future bristles with anarchy.

Mano Negra's first single, "Mala Vida," got the band signed to Virgin, and only their debut LP, 1988's Patchanka, wasn't purchased by moi in Austin at Waterloo Records. Joining knuckle-dragging third-timer King of Bongo, final studio effort Casa Babylon, and live In the Hell of Patchinko – featuring West Texan Sonny Curtis' "I Fought the Law" – Patchanka is Mano Negra at its purest.

"Mano Negra," "Mala Vida," "Indios de Barcelona," and Leadbelly's "Rock Island Line" all made it onto Puta's Fever the year the band played the Austin Opera House at SXSW, but it's French New Wavers "Ronde de Nuit" and "La Ventura" that translate best into English. The latter slams peak Oingo Boingo with the wickedest neon synth riff and naked outro since Molly Ringwald kicked out the jams in The Breakfast Club or Jake Gyllenhaal went "Mad World" in Donnie Darko.

Another Megastore import, a new Mano Negra Best of, shames the old U.S. issue, particularly with its live bonus disc that opens with "Pas Assez de Toi." When my car stereo got jacked last week, my only concern was for the collection's first half, which had been in the CD player. Mercifully, Amazon.com had my back.

Back at La Tour Eiffel, the soldiers reappear upon my exit. Exterminating the rats that infest the platform overlooking such a global wonder might be a smarter deployment.

When I'm bangin' on my bongo

All that swing belongs to me

I'm so happy there's nobody

In my place instead of me

I'm a king without a crown

Hangin' loose in the big town

Cause I'm born to rock 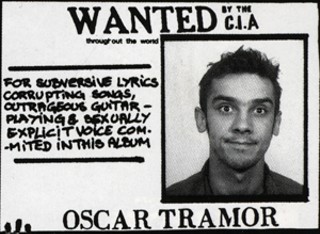 Chicago did in fact go loco for Manu Chao's swing last Saturday night. Third-billed headliner at Lollapalooza 2006, produced by Austin's Charles Attal Presents and Capital Sports & Entertainment – organizers of both the Austin City Limits Music Festival and the Rolling Stones' Zilker Park date – Chao was King Kong. The competition, Kanye West, across the grounds with 40,000 of his closest local boosters, trampled twice the field that Chaoists mulched, but only one 90-minute stand thrashed for dear life.

The differences between Lolla and ACL: Grant Park's billion-dollar skyline, Buckingham Memorial Fountain (geyser), and a vineyard's worth of honest-to-goodness shade. Seagulls and squadrons of geese designate it a flight path but appear unrelated to the foul odor polluting parts of the park. Charles Attal smells only roses the morning after Chao's superstar set.

Agreed is the notion that the singer, notorious for his distaste of Super-8 countries and who played exactly three U.S. dates on his last world tour, didn't want to leave the stage when confronted with the Park's 10pm curfew. In Attal and partner Charlie Jones' on-site production trailer that AM, the latter's laptop bubbles with Chao as he preps for the day's final push. The three of us shake our heads in wonder. Amy Corbin, who estimates that it took her and Attal five years to land Chao, can't believe it either. No one can.

When the red-beret-wearing Chao and his backing fivepiece – most of them glimpsed on the Babylonia DVD – hit the stage after Thievery Corporation's sound bleed was finally silenced, it rivaled the quasi religious instant catharsis of U2 at Camp Nou. Every Hispanic within a 100-mile radius stopped mid-"Olé, olé, olé" and roared like the lion of Judah. In that moment, Chao was clearly taken aback, maybe reminded that a superpower's politics aren't necessarily reflected in its populace. Then the band's tear gas went off.

While Chao jumped up and down exhorting "¿Que paso? ¿Que paso?" and mosh pits cleared crop circles of audience, the show went from demonstration to near riot. Drums, timbales, guitar, keyboards, and mega bass lock-stepped into pummel mode, frequently dropping on a dime into a ragga before resuming their possessed slam dance. No one onstage or in front of it took a breath for the first 30 minutes. Mexico's Café Tacuba, at the top of the Latin alternative-rock food chain, couldn't hold a Roman candle to the sustained release of Chao's crew.