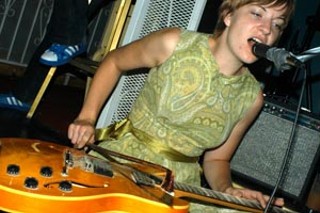 From the outside, the Peacock looks like another Eastside dive with bars on the windows. But inside, it looks like a glittering version of a hotel bar in a Raymond Chandler novel. Chandeliers glimmer, peacocks adorn the walls, and women sip martinis; you almost expect Philip Marlowe to stroll by any minute. But we weren't looking for any trouble that night. No, we were there for the Weird Weeds. Knoxville duo and Weird Weeds touring partners W-S Burn kicked off the night with their spare wooze. Singer Amanda Beddard's knockout voice filled every inch of the room as she spun a rickety lamp adorned with dream catchers and wind chimes. Their sound took some getting used to; it was almost like we were watching someone summon a ghost in a David Lynch movie. Weird Weeds' August release Weird Feelings (Sounds Are Active) already has buzz surrounding it, and the trio proved it's not bunk. A lot of what the Weeds do borders on pop, but never for long: Nick Hennies provided the erratic drumming and odd percussion, switching from sticks to brushes on the regular; seated guitarist Sandy Ewen switched between a bow, chalk, and other assorted tricks from her bag, wrestling groans from her guitar; Aaron Russell strummed and plucked. Songs were relatively short, but the confines of the dreamy "Tupper" or "In Your Arms," hid screams, unnerving silence, beautiful melodies, urgent drumming, and, on the last song, a triangle. Ralph White was a last-minute fill-in for mysteriously absent Possessed by Paul James, and he was amazing as usual, his haunting banjo taking the remaining crowd back to a time of lonely dames and cigarettes and whiskey.