Jason McMaster reflects on the passing of the Back Room 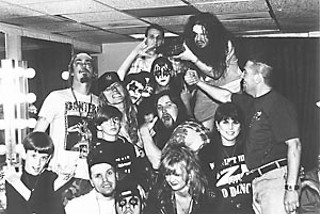 Jason McMaster (center, with pot leaf hat on), the late Dimebag Darrell (with camera), and friends

In the early Eighties, teenage Back Room rat Jason McMaster learned from the likes of Armored Saint, Saxon, Nazareth, and Cheap Trick, and applied those lessons in Austin's two most important hard-rock acts ever: seminal progressive metallurgists Watchtower and the gold-selling Dangerous Toys. Twenty years, and perhaps 20 bands, later, his is the undisputed face of the Back Room. In fact, perhaps the only Back Room fixture more identifiable than McMaster's mug may be "The Pole," the club's huge load-bearing, view-obstructing onstage column. "If you're tired at the end of the show, it's an excellent crutch," McMaster told the Chronicle in 2003. "I use it as part of the show, as every pole on a stage should be."

Austin Chronicle: How was the Back Room different from every other sleazy metal club?

Jason McMaster: This one was home. Period. You play one sleazy metal club, you've played 'em all. Ain't that the fuckin' truth. But when you're at home and you want to go to a sleazy metal bar, you went to the Back Room. It's where the heart mended itself, bloomed, and got angry and happy, all in one shot-glass.

AC: So a piece of you dies with the Back Room, right?

JM: Not necessarily. Mark Olivarez said this first, but it truly is more about the people than the place. Relationships were made. People were born, and people died. People were discovered, and people faded away. There were people hired and fired. They moved away. They moved back. They had children. The circle of life continues either way.

AC: But that clubhouse for like-minded people no longer exists.

JM: True. And it's closing down because of gentrification, not because the scene is dead. But people won't let what they had there die. You had to be there. And if you weren't, you missed a good time. Fuck, that place has smelled exactly the same for 20 years.

JM: The night crew swabs the deck with ammonia to cover the beer smell and barf. So in the morning it smells like ammonia, but a few hours later that gets replaced by something that smells like burning plastic. It could just be the fucking layers of paint, spit, and scum on the walls.

AC: Will you miss the pole?

JM: Originally, there was the corner-stage pole, stage left. And then when they moved the stage, there was the center pole, the way it is now. Fuck. I've molested two poles there. It's funny, there was a blog the other day where people were talking about grabbing the pole when the bulldozers come. I felt a little ownership there.

AC: So you want it instead?

JM: Nah. I've had my time with the pole. I'd like to have a brick though, to set next to my Liberty Lunch brick. This is that important.

AC: You won't be there to see it close.

JM: No. I'll be in Canton, South Dakota, with Broken Teeth. The tour's been booked since April.

AC: Is that disappointing?

JM: It is. When they announced this, I think they instinctively thought I'd be there to play the last show. It's definitely an honor for the staff to suggest I'd be the last guy to come off that stage. But I've got obligations, and they respect that too. That obligation is to rock until I'm dead, and that's what the fuck I'm doing.

AC: That's what the Back Room would have wanted.

JM: Damn right it is.