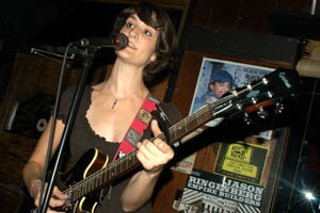 Picture a bar in the Midwest circa 1991. It's the dead of summer, the AC's broke, and they have Schlitz on tap. That same feel permeated the Hole in the Wall like bong water on a dorm room floor. Not that any of the acts on Saturday night's all-local bill sounded like bar bands, but there was that same denim restlessness and boozy bounce to the night. The energy just felt right. Local trio Darling New Neighbors kicked things off wearing felt flower hats and collars, a possible tribute to the night's headliner. Singer/accordionist/bassist Elizabeth Jackson wore an especially elaborate chapeau that looked like a mushroom. Add those accessories to the band's oddball pop rock, mostly off of their stellar Every Day Is Saturday Night, plus Jackson's twangtastic vocals, and it's the closest any band's come to making an accordion work on a disco song (sorry, Weird Al). Despite the name, Pink Nasty, aka 24-year-old Sara Beck, pens very catchy, almost romantic indie pop. All right, between-song banter was peppered with sex jokes and Beck's admission that she had just pissed her pants, but her voice was lilting, the music high and lonesome – a promising preview of her upcoming release Mold the Gold. Then San Antone hombres Buttercup got their Kinks out, dropping songs about being easy, and chopping the crisp "Johnny Appleseed" from latest Hot Love. It was a hot night. Some things never change.