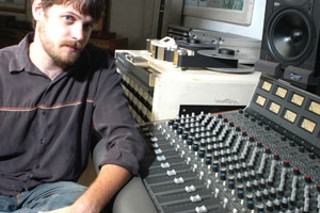 By the Boards: Wofford at Cacophony Recorders (Photo By Courtney Chavanell)

"I've always had a predisposition to figuring stuff out," says Erik Wofford, the soft-spoken local producer whose recent credits include Voxtrot, Snowden, the Black Angels, the Octopus Project, and Okkervil River. "I've always been curious how things work. I've always loved music and studied it really carefully, and always knew that I had to learn it on my own terms." A big fan of Sixteen Deluxe while attending Austin's McCallum High School, Wofford, 27, recorded more than 100 bands for KVRX's weekly Local Live program and was present the July 4 when Breaker Morant walked out of the station and decided to change their name to Explosions in the Sky. His first project was friends Experimental Aircraft; others include Western Keys, EITS, early work with My Morning Jacket, and forthcoming albums from Youngmond Grand, Zookeeper, La La Land, AM Syndicate, Til We're Blue or Destroy, and Tia Carrera. "I end up being friends with most of the bands I work with," says Wofford from behind the board of Cacophony Recorders, the spacious, Daniel Lanois-inspired East Austin studio he shares with local musician and producer Darwin Smith. "It's a much better way to work than to just look at these bands as a paycheck." Wofford, who recently joined Steve Lillywhite, Niko Bolas, and the Matrix on L.A. producer-management firm Worlds End's roster, has certainly found an unusual way to apply his UT geology degree. "Geology's a mixture of science and creativity, and that's kind of what I do," he says. "I handle the technical part of making a recording, and that lets people let loose and do whatever they want." 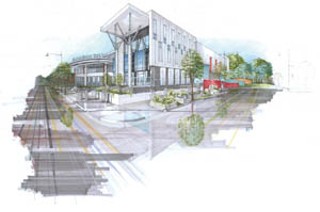 One year from now, if all goes according to plan, watching a show at the Austin Music Hall will be a significantly different experience. Last Tuesday, owner Direct Events and developer Andrews Urban announced plans for a $5 million interior and exterior renovation of the 12-year-old venue. "It's a great opportunity to capture a lot of the talent that we as a company, and possibly Austin, have not had the opportunity to bring in," says Direct Events owner Tim O'Connor. The overall square footage will increase from 22,000 to 42,000, mostly vertically, nearly doubling the capacity for seated shows – some permanent seats will be installed – and bringing the general-admission cap from 3,000 to "somewhere in the fours." Additional plans call for a mezzanine level, a larger stage, no floor obstructions, better air conditioning, more bathrooms and alcohol points-of-sale, and a three-story "chimney" that will allow curtains, backdrops, and scenery. "We're not trying to become a legitimate theatre, but we will have the base line of a legitimate theatre," says O'Connor. Direct Events is also talking with several local restaurateurs about a two-level eatery that will be open all the time and serve to-go food during concerts. "We're not talking about hot dogs here," notes O'Connor. Exterior renovations include large glass windows and alcoves featuring statues of local artists. Groundbreaking is planned for Jan. 1, and O'Connor says construction will happen in phases to allow the Music Hall to remain open during events such as SXSW.

So far so good for earthy Austin rocker Patrice Pike on CBS' Rockstar: Supernova. Pike performed Jefferson Airplane's "Somebody to Love" in week one and was pronounced by co-host Dave Navarro to have "killed it." After conquering Nirvana's "Heart-Shaped Box" in week two, Pike, though trailing apparent front-runners like Australian Toby, prickly Canadian Lukas, and pierced Houstonian Dilana, hasn't come close to being voted into the show's dreaded "Bottom Three." Stay tuned.

Austin techno-rock duo Ghostland Observatory are a late add to next month's Lollapalooza festival in Chicago's Grant Park, penciled in for high noon Aug. 4. Find out how it went the very next night, when they appear at Emo's with Pong, Lions, and Say Hi to Your Mom.

Zykos' "Keep It Light," which they recorded in guitarist Mike Roeder's garage, is one of Spin's "20 best songs to download this month" in the August issue (Thom Yorke cover). The introspective quintet is currently writing and demoing songs for its next album. Elsewhere in Spin, Los Lonely Boys' Sacred gets the same rating it does in this week's "Texas Platters."

Legendary stomach-churning (but in a good way) Austin punks the Chumps will reunite for a show at Beerland Nov. 10. Mortville and Super Secret Records are planning a joint CD reissue of the band's previously vinyl-only 2000 classic Good Times ("Punch Mama in the Nose," "Fuck You, I'm Rich") that should be available at the show.

Several local musicians have "profiles" on DontDateHimGirl.com, a Web site where women expose cads who have (allegedly) cheated on them. So musicians cheat. In other breaking news, Paris Hilton likes to party, the Astros are underachieving, and Arabs and Jews just don't like each other. 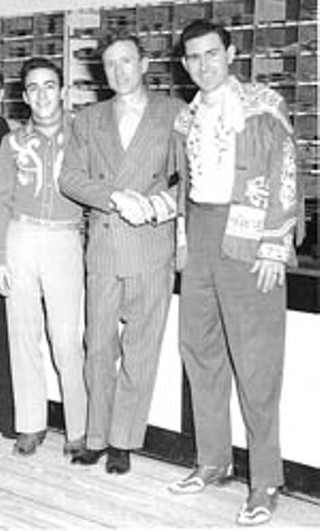 Charlie Fitch, whose Sarg Records released the recording debuts of Doug Sahm and Willie Nelson, died May 7 in Luling, his home of more than 55 years. A native of Hallettsville, Fitch enlisted in the Army Air Corps in 1940, served as a tail gunner on B-17 bombers during World War II, and was a German prisoner of war in 1944-45. He married Bennie Lou Bassett of Luling in September 1945 and worked at San Antonio's Brooks Air Force Base until his honorable discharge in 1950. He then moved to Luling and started the Luling Phonograph & Record Shop, and began Sarg Records in December 1953 with Neal Merritt's "Korean Love Song." In 1954 Dave Isbell & the Mission City Playboys, featuring Willie Nelson on lead guitar, recorded for the label, and a 12-year-old Doug Sahm released "A Real American Joe" in January 1955. Drawing from a talent pool that stretched from Houston to San Antonio to South Texas for more than 35 years, Sarg released more than 150 singles in Western swing, country, polka, rockabilly, rock & roll, R&B, and conjunto; its biggest hit was Cecil Moore's 1964 instrumental "Diamond Back." Fitch was also Caldwell County's Veterans Services Officer for several years and is survived by three daughters and a son. In 1999, Dutch label Bear Family released the still-available 4-CD box set The Sarg Records Anthology. Charles Wesley Fitch was 87 years old. (Thanks to Andrew Brown and the Luling Newsboy & Signal.)
More TCB columns