The Wood Whisperers at Collings Guitars 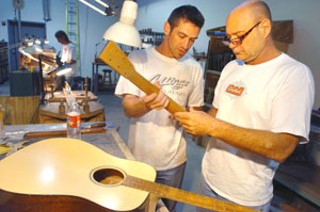 Since 1979, Lyle Lovett has represented Bill Collings. Not as his manager. Not as a paid spokesperson. But as a fan. And as a guitar enthusiast who believes that the best acoustic instruments in the world are built by Bill Collings in Austin.

"The best. Hands-down. Period," says Lovett, who plays Collings guitars onstage and in the studio almost exclusively. "They're well-made. They sound great. And I think he's single-handedly brought consistency back to guitar-making. These are new guitars that sound like great old guitars used to. I've come across lots of custom and handmade guitars. And not one did I love more than Bill's."

Not only isn't Lovett being paid for his endorsement, he pays for his Collings guitars. Full list price. As do other Collings players like Keith Richards, Pete Townshend, Andy Summers, Emmylou Harris, John Fogerty, and Joni Mitchell. In Austin, they're played by folks such as Darden Smith, Stephen Bruton, Alejandro Escovedo, and Bruce Robison. Not a one of them got theirs free.

Unlike most guitar-makers, Collings doesn't do endorsement deals. Lovett says he's loyal to Collings guitars because they're the best money can buy. Which goes a long way in explaining why the Collings success story reads like a page torn from the Tipping Point. This is a business built on evangelical word-of-mouth: Collings has never even produced a sales brochure, let alone employed a publicist or set aside capital for an advertising and marketing budget. At CollingsGuitars.com, there's as much discussion about humidity and temperature control for folks who already own them as there is information on how to buy one of their acoustic guitars or mandolins.

"Some companies need exposure," says Collings general manager Steve McCreary. "We've focused on the blood, sweat, and years instead. Enough people recognize quality that we haven't had to wave our arms in the air to get noticed."

McCreary's quick to admit Collings guitars aren't for everybody anyway. Simply put, they're not cheap. For their acoustic guitars, basic models start at $3,000, while custom jobs can easily exceed $10,000. Even if you can afford one, it generally takes eight to 10 months from the order date for Collings to ship a new guitar. Even with a staff of 50 full-time employees operating out of a new, 2,200-square-foot shop, just five to six guitars are shipped each business day. Every instrument consumes over 40 hours of handcrafting spread across a 10-week process, resulting in a production run of 1,100 guitars and 500 mandolins annually. Collings says the secret to his company's success is focusing on quality and craftsmanship over production numbers.

"They're not cheap because man-hours aren't cheap," states Collings. "But they're cheap when you consider the time and talent that went into them. Ultimately, we sell labor. Rather than try to take the labor out of the manufacturing process, we've always looked for ways to put the labor back in. It takes a lot of hands to make a guitar that looks like nobody touched it."

Indeed, Collings guitars are "bench-made," not manufactured; constructed in a shop, not a factory. Like snowflakes and Frank Zappa compositions, no two Collings guitars are exactly alike. Collings banks on the idea that the real benefit of handcrafting is a degree of accuracy and consistency machines can't replicate. Wood for a guitar that'll be made tomorrow most likely showed up at the shop to begin an extensive preparation process nearly a year ago. For each guitar and mandolin, the top and back is sanded and shaped by hand, while the necks are calibrated to within a thousandth of an inch. The finishing process alone features 12 separate coats of lacquer that, combined, are just five-thousandths of an inch thick.

While Collings has a shop full of highly trained luthiers to affix each of those layers, the boss says the nuts and bolts of building instruments he's willing to put his name on aren't much easier today than they were 20 years ago, when he was crafting them as a one-man operation. In the mid-Seventies, Collings began doing guitar repair in Houston, handmaking guitars on the side. After moving to Austin in 1980, he shared shops with luthiers Tom Ellis and Mike Stevens before setting up his own small shop, which in 1989 took on its first two employees. Before long, Collings had his first big order: two dozen guitars.

"How lucky was I to have orders immediately? Very. And I got lucky with the right wood," Collings says. "And because I did repair for a lot of years, I knew what went wrong with guitars and fixed that in ours. I've been lucky there too."

McCreary's not buying the luck angle.

"He's got an engineer's brain, machinist's hand, and designer's eyes – the holy trinity for work like this," insists McCreary, who points out that virtually every piece of machinery in the shop – including complex heating and cooling devices for wood-bending – was designed and built by Collings himself. "There's nobody out there like him."

Both men agree, however, that the company's rapid growth from just a handful of employees in 1991 to its present size today is both a strength and weakness. "People are what makes this fun, as well as frustrating," says Collings, who no longer plays every guitar before it leaves the factory, but still personally inspects each one. "Labor and training is expensive. It can take a year for a guy at one of our benches to be up to speed – to get to the point he's not going to screw something up and cause more work. Sure, we could sell a lot more guitars than we do. But how could you just add 200 people a year? It would be a zoo."

Although Collings does shave each and every mandolin top by hand, since bulking up his staff, his role, increasingly, has become research and development. On top of that, for the past two years Collings has been designing and building prototypes of his company's most ambitious product yet – a line of handcrafted electric guitars. For acoustic guitar fanatics, the idea of Collings making electrics isn't unlike the prospect of Dylan at Newport.

"I know there are people that might be skeptical," acknowledges Collings, who'll use this weekend's NAMM (National Association of Music Merchants) convention in Austin to debut the new electric model, "but I suspect there are more people excited to see what we do. Face it, if a guy has a handful of our acoustic guitars, we have to find something else he wants. Historically, every guitar business does a little to shake the industry up. We want to excite the market – we don't want to make just one thing. We want to keep adding a twist to it, and we think we can apply what we know about acoustics and put a little more life into electric guitars too."

Whether the Collings line of electrics succeeds like its acoustic counterparts remains to be seen, but there's no doubting Bill Collings' primary motive: a passion for building things. In his office sits the shell of a 1940 Ford convertible that he's slowly customizing with a C5 Corvette motor and suspension. Like Billy Gibbons and so many other "cars & guitars" enthusiasts, Collings' love affair with craft boils down to a simple appreciation for complex mechanics.

"We're just kids with toys," Collings says. "Cars are complex and thrilling. Guitars are fascinating because they're not just a 3-D box. They're so much more dynamic than I think people even realize."

The International Music Products Association's Summer Session (NAMM) runs July 14-16 at the Austin Convention Center. The event is an industry-only convention and trade show closed to the general public. NAMM members can check www.nammsummersession.com for a full lineup of trade-show exhibitors, booth appearances, and private concerts.