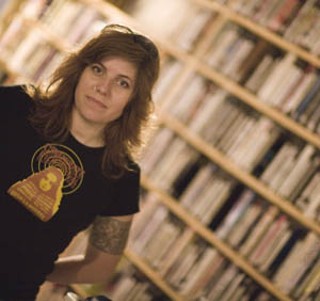 Journey was the original emo band. Not emo in the "I hate myself/I wanna die/Why don't you love me?" way, but actually emotional. Journey's songs were about triumph over the broken heart, going your "Separate Ways," spreading those "Open Arms," and, sometimes, about "Sandcastles," but that's just on Japanese import. People tend to talk about them with hushed admiration or bile-eaten hatred; there's really no one who says, "Yeah, Journey's OK."

Haters would have had a field day during Faithfully: the Journey Sing-Along at the Alamo Drafthouse Downtown on a recent Saturday night. "Travis County's premier Journey cover band," Odyssey, provided the preshow score. Nevertheless, there were some personal triumphs happening in the rowdy, to-capacity audience. There's triumph in the scattered air-drum solos during "Open Arms"; there's triumph in the fact that a fortysomething investment banker is wearing his 1981 Journey Escape tour T-shirt and no one harasses him; and when the time comes during "Lights," we hold up our cell phones in place of a lighter.

In short, we feel it, man. This is why Journey still gets played at every prom in the country; they're part nostalgic longing and part white-fringe leather irony, which equals some sort of guilty triumph. On the night in question, folks pounded the tabletops, stood up and cheered, and collectively laughed at Steve Perry's moustache in the video for "Faithfully." We also cringed when close-ups of the band's commendably tight pants lingered a little ... too long.

Journey was getting its night of crowd-assisted "Lovin', Touchin', Squeezin'" on an appropriate headliner night, but the Alamo's Music Mondays, roughly 21/2 years old now, have neatly coexisted with events like weekend sing-alongs of R. Kelly and competitive events like the Austin Air Guitar Championships. Music Mondays mold bits of cultural detritus into 90-minute history lessons, exposing local music fans to rare footage of underground or cult-status acts, while also screening wide-release documentaries like Lian Lunson's poetic Leonard Cohen doc I'm Your Man and indulging audiences in the occasional guilty pleasure like the recent boy-band sing-along. In other words, Music Mondays are a void-filler on otherwise dead evenings Downtown.

Music Monday emcee and programmer Kier-La Janisse, an energetic, petite brunette with an armful of tattoos, is largely responsible for the material shown; she's been a film junkie since her college days, when frequent arguments with film professors stoked her passion even more.

"I'd always been 'the horror girl' since as far back as I could remember," Janisse explains. "In kindergarten I scared other kids with gruesome stories, collected Fangoria and Famous Monsters [magazines], watched the Saturday Creature Feature religiously, and brought hand grenades to show-and-tell. By the time I hit 30, my interest in the genre was starting to wane a bit; I had kind of overdone it my whole life."

Janisse met Alamo owners Tim and Karrie League in Vancouver, where she was putting on her annual splatter horror fest Cinemuerte. "We had a mutual friend who recommended that they come check out my festival," she explains. "So they did, and we became friends and later ran into each other at another festival in Spain. It was there Tim offered me a job while under the influence of alcohol and then forgot that he had offered me a job when I decided to take him up on it several months later. But I was keen for a break from Vancouver and decided I'd come down here for a year to try it out. I stayed."

In December 2003, during a particularly slow Christmas week, she screened Pretty Things: The Rise and Fall of Glam Rock together with I've Come to Tell You I'm Going, a Serge Gainsbourg compilation she cobbled together. Both sold out, and Music Mondays was born. Since she began, at a bargain-basement door cover of $2 (it was $1 until a few months ago), music lovers have been treated to a variety of films, from the enlightening to the downright weird. Back in May, they presented a night devoted to enigmatic cult crooner Scott Walker, and earlier this year was the hell-and-gone 1981 documentary Urgh! A Music War, featuring performances from Gang of Four, the Cramps, and Gary Numan, and Klaus Nomi's alien arias, which brought down the house. Folks have campaigned to bring this one back.

There was Derailroaded, the heartbreaking bio of Larry "Wild Man" Fischer, a Sixties counterculture casualty and performer; the grainy but excellent TV Party, a late Seventies/early Eighties cable-access show in New York in which Basquiat and Deborah Harry were regular cast members; the Monkees' trippy, Jack Nicholson-penned film Head; the well-attended retrospective on New Zealand's Flying Nun Records; the stark investigative doc Jandek on Corwood; a sold-out screening of Amazing Grace, a Jeff Buckley retrospective; and a terrific BBC documentary on the Fall that made Mark E. Smith seem kind of likable. Music Mondays have also delved into the lives of reclusive or revered artists like Gary Wilson and Nick Drake. Then there was the Wayne Newton birthday party.

Beyond just music films, however, the Alamo has been attempting synergy. Whether it's a director Q&A, like Gram Parsons, Fallen Angel director Gandulf Hennig, Ian McLagan's Faces live set and birthday party for one-time Austinite Ronnie Lane in conjunction with The Passing Show, The Life and Music of Ronnie Lane, or this Saturday's Cut Chemist show in Waterloo Park, with visuals by the Alamo's Rolling Roadshow and sponsorship from Emo's, music and film have come together in a community where both thrive. This only means good things for both camps, DIY endeavors much of the time.

One recent experiment was the Beats Per Minute film festival, co-sponsored by Vulcan Video and the record store folks at End of an Ear, where local teams were given 48 hours to create a music video. Entries included someone in a Big Bird suit doing dirty deeds to Olivia Newton-John's "Physical" and a guy in bike shorts thrusting to Def Leppard's "Pour Some Sugar on Me." There's the potential for absurdity here, with Austin's reputation for weirdness and all, but there's also potential for serious discourse, whether it's watching a bunch of metalheads burn churches in Metalstorm or shimmying to the history of bubblegum music.

The most synergistic event so far may have been the recent screening of Fallen Angel, another sold-out event and a film Janisse had stalked for years. Immersed in an obtusely utopic Southern California backdrop, the documentary, now on DVD, plays out as a stunning portrait of a genre's birth, though the majority of the film is profoundly sad; Parsons could never quite tear away from his reflection, but the music was almost prescient, resigned to fate years before his untimely death. It also prompts the question: Could anyone in country music today get away with wearing sequined suits with pills and marijuana leaves sewn on them?

Steel-blown pop quintet Li'l Cap'n Travis played live after the film, which is another aspect the Alamo has nurtured. Psych heroes ST 37 were one of the first local acts to score a classic silent film for the Alamo, then accompany it live ("The Sound and the Fury," Music, September 10, 1999). The group's bassist, Scott Telles, remembers their scoring of Metropolis as one of their "most successful gigs ever. I think most bands would do it for free Alamo food and beer and the exposure," he says. He also provided narration for several segments of a recent Krautrock doc.

The Flying Luttenbachers, meanwhile, played live for a screening of Contort Yourself: A New York No Wave Tutorial. Cry Blood Apache held court in a parking lot before a recent Monday Judas Priest doc, while Golden Arm Trio composer Graham Reynolds presents a small orchestra for the musical portion of the A Scanner Darkly showing at the Alamo this weekend (see Screens p.50). Janisse says she wants to do this more frequently, but with the budget, she has some reservations.

"I know there are probably some bands that would be happy to play for free," she acknowledges, "but I usually feel bad asking them."

While the quality of the films isn't always top-notch, with the low admission price, big films aren't always available. So Janisse searches out 35mm prints or broadcast video format. If it was shot on film, they play it on film. "We can't bring in a lot of classic music movies that are owned by studios, except maybe every once in a while," Janisse laments. "So that's why we haven't played Stop Making Sense or The Last Waltz or Tommy. Also, the availability of the films in 35mm is often a problem. I don't like to show films on video that were shot on film. So I won't show Get Crazy or Suburbia unless I can find a 35mm print.

"Also, this is just the snobby part of me," she adds, "but I tend to avoid really popular contemporary bands. If I do things focusing on a recent band, it's usually an indie band. But I do want to expand the spectrum of music that I'm covering with the series, so suggestions are always cool."

Of course, there are some misses. One particularly bizarre choice was the recent Stunt Rock, a two-hour opus featuring a Rod Stewart-looking Aussie stuntman and a bedazzled band called Sorcery. When Janisse doesn't have a full-fledged doc on hand, she often edits footage and interviews together and adds voiceovers for context, such as for the Gainsbourg doc, a process that doesn't mesh with every viewer. "The only thing I've really noticed is that sometimes people think the films are too long," Janisse says. "This is common with indie filmmakers who fall in love with their subject and forget that the audience can get disengaged quite easily. But, usually, I find the strengths of the film outweigh the weaknesses and that if I have to choose between showing a movie that might be 15 minutes too long and not showing that movie at all, I'll show it anyway, because I think the subject matter is underexposed or the film makes some valid arguments."

And discussion is what Janisse is striving for, as an ardent music lover herself. There are usually regulars in the audience every week, regardless of what's playing, and in a city so cross-pollinated with filmmakers and musicians, Music Mondays offer a meeting point, a forum for all the music and film nerds in town to revel in obscure musicians and bands, or learn about a musician they've never heard of, and possibly get drunk and eat curly fries.

"I hope to create a following for it like Weird Wednesdays, where the audience is just really open-minded, and they'll go every week even if they don't remember what movie is playing," Janisse says. "I would love to have the theatre full every week and then everybody just goes for a beer afterwards and raps about the movie."

Or about the creative legitimacy of "Oh Sherrie," as was overheard that Saturday night at the Journey sing-along.

These were the believers. They never stopped.