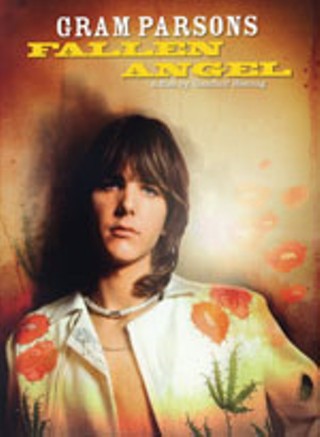 Near the end of Fallen Angel, an impressive new documentary about the life, death, and cult of Gram Parsons, his stepsister Becky Parsons Gottsegen laments, "Gram can never die. Gram can never be at peace. [He] can't rest, because people won't let him die."

Her feelings resonate, not only with the release of the new DVD, but also in conjunction with the new, 3-CD Complete Reprise Sessions, which compiles the country rocker's two solo albums, 1972's GP and '73's posthumous Grievous Angel, in remastered form with rare radio interviews and live tracks. The prize is the third disc, 15 previously unavailable alternate takes, revealing, semiacoustic versions of songs from those LPs, plus three covers made famous by the Everly Brothers and the Louvin Brothers.

Notable? Absolutely. Because like Jimi, Janis, and the Doors' Lizard King, all similarly sexy and dead, Parson's musical legacy remains influential thanks to more than 30 years of reissues and rare recordings. Indeed, "people won't let him die." So why is it that Parsons, the originator of what he referred to as "Cosmic American Music," lives in perpetuity, while others, like Little Feat's forgotten Lowell George, have faded away? There's no easy answer.

Or maybe it's simply this: Parson's music is still as affecting today as the day it was recorded. His soulful fusion of country and rock has rarely, if ever, been equaled. Music writer emeritus Ben Fong-Torres, who wrote the definitive Parsons biography, 1991's Hickory Wind, views it from another angle.

"The years don't matter," he asserts by phone from the Bay area. "There are certain people that have made a mark in music who stand apart, and their influence continues, people like Elvis and Sinatra and Louis Armstrong. The fact is, he's being celebrated. It's a tribute to him and his music."

Country music journalist Holly George-Warren, who wrote part of the liner notes for the new box set, chimes in. "You know who would have been the most happy of anyone about any of this?" she exclaims. "Gram Parsons. The guy wanted fame. He wanted people to respect his music."

Emmylou Harris first came to the public eye through her work as duet partner with Parsons. The angel-voiced singer is credited as co-producer of The Complete Reprise Sessions and was interviewed by George-Warren for the liner notes. When discussing Parsons' life, George-Warren remembers, "Emmy said it was like someone had made it up. There are just too many tragic details in a very short life." 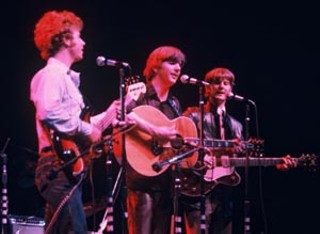 The short version: Ingram Cecil Connor III, born Nov. 5, 1946, was heir to John Snivley, who owned about one-third of all the citrus fields in Florida. Having spent some of his youth in Georgia, ICC3 was 12 when his father committed suicide. His mother, Avis, married Bob Parsons, upon which Gram changed his name. In 1963, Parsons formed a folk group called the Shilos, who performed throughout Florida. On the day Gram graduated from high school two years later, Avis died of alcohol poisoning. He then attended Harvard for one semester, and while in Boston formed the International Submarine Band, which released 1968's Safe at Home after the group had already disbanded. Following a move to New York for a year, Parsons relocated to L.A., joining the Byrds as a "jazz pianist" and replacement for David Crosby. Although only with the band for a little more than four months, he was the guiding light behind one of the group's most important albums, the now-classic Sweetheart of the Rodeo.

Parsons was fired from the band after refusing to play a concert in South Africa – on advice from Keith Richards. Instead, he formed the Flying Burrito Brothers with another Byrd that flew the coop, Chris Hillman, the lineup releasing a pair of LPs, 1969's alt.country blueprint The Gilded Palace of Sin and follow-up Burrito Deluxe. In 1970, Parsons quit the Burritos and escalated his drug use while woodshedding in the south of France with Richards, who was recording Exile on Main Street in the basement of his villa.

The following year, at the suggestion of Hillman, Parsons heard Emmylou Harris sing in a small club in Washington, D.C. A year later, she joined him in L.A. for the recording of GP, a solo record that features guitarist James Burton and other members of Elvis Presley's band. The troupe, known as the Fallen Angels, toured in early 1973, including stops at Austin's Armadillo World Headquarters and Max's Kansas City in NYC. That September, Parsons died in Joshua Tree, Calif., purportedly from an overdose of morphine and tequila. It's here that the already fantastic story turns weird and the legend grows.

Parsons' body disappeared from the Los Angeles International Airport at the hands of his former road manager, Phil Kaufman, who claimed Parsons wanted to be cremated at Joshua Tree. Kaufman and a friend drove the body to Joshua Tree, where they set fire to it. The two were arrested several days later and fined $700 for burning the coffin, since stealing a corpse wasn't a crime. The burned remains were eventually returned to Parsons' stepfather and interred in New Orleans.

Kaufman's version of these events are depicted in the 2003 film Grand Theft Parsons, which disclaims explicitly that the story is part fact, part fiction. It's definitely grade-B material, with a weak script and just plain goofy acting from Johnny Knoxville and Christina Applegate, yet still car-wreck fascinating in its own way. Country singer and songwriter Jim Lauderdale, who, along with Dwight Yoakam, matches Parsons as the dapper model for iconic Nudie suits, knows well the allure of Joshua Tree.

"I get a lot of inspiration just from walking around out there and made a songwriting pilgrimage a few weeks ago," he enthuses. "There's something about the landscape. The trees and the jumbo rocks are real inspiring to me. It just brings a lot of songs."

Parsons crammed a lot of living into his 26 years on the planet, fulfilling rock & roll's enduring credo: "Live fast, die young, leave a beautiful corpse." (Make that a charred corpse.) Beyond his music, his dedication to bringing country to the rock audience, his sense of style, his association with the Stones, and his mysterious demise, there's something else that keeps Parsons at the forefront of popular music's imagination. "He just had this charisma about him," explains Rhino Records' James Austin, the other co-producer of The Complete Reprise Sessions. "People are still very curious about him. There was something that was really charming about him, and it really comes through in the music. Plus he has this hip factor. On the scale of one to 10, he's a 10. It's like James Dean, cooler in death than he was alive." 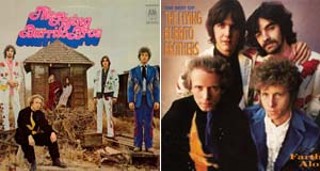 Austin recalls that after producing 2001's Sacred Hearts and Fallen Angels, a 2-CD career overview of Parsons, he thought he had used everything unreleased that was available. "I was thinking about two of my favorite records of all time [GP and Grievous Angel] and that there's nothing I can do to upgrade them. So Bill Inglot [who co-produced Sacred Hearts] went to the sessions masters and found these reference vocals, almost like demos for the songs. They're cursory run-throughs, rehearsals in a sense, but they were so beautiful.

"I was thinking, 'Well, I love it but I'm a fanatic. I need someone else to bounce this off of." So I went to James Burton, and he thought that some of them were better than the released versions."

Previously unreleased Parsons performances were at the heart of a 4-CD Byrds box set from 1990, and while his stint with the group was remarkably brief, its impact on popular music can't be overlooked. Sweetheart of the Rodeo, whose 1997 reissue made it even better, brought Parsons to a much wider audience. Bandleader Roger McGuinn is readying a new Byrds box, There Is a Season (Legacy), four CDs and one DVD collection that, while redundant in many ways, upgrades the first edition's sound mix and adds a 30-minute DVD with vintage performances.

Even with decade's worth of product in circulation, the best way to understand Parsons might come from watching the new documentary Fallen Angel. Director and producer Gandulf Hennig, who screened the film recently at the Alamo Drafthouse, ties it all together incisively and with a great deal of love, through interviews with Parsons' friends and family members as well as the music of all the bands and his solo work.

Asked whether Parsons carries any influence for today's under-30 set, it's steel player Gary Newcomb from Austin's shambolic country pop-rockers Li'l Cap'n Travis – who played the aforementioned Fallen Angel screening – gives a definitive answer, "10 years ago or so, it was uncool to be influenced by him," he admits, "but it seems to be coming back around now."

"Of course I'm adding fuel to the fire, I'm afraid," he says. "Then again, I think the movie helped the family come to terms with the whole thing a lot better. That's not something I can take credit for, and it wasn't my intention, but I think they're now more at peace with it than they were before.

"For me, one of the most amazing experiences was that they really like the end result. Some people who hadn't talked in 30 years, started talking again. I was chasing my dream, and I was doing some good for somebody. I would have never thought of that."