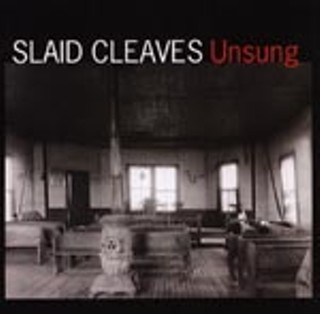 Never one to hurry an album just to have something new to sell, Slaid Cleaves' latest is a surprise in that it doesn't feature any of his own songs. Instead, Unsung collects the work of other singer-songwriters, and, like its title, announces – with the exception of David Olney, Ana Egge, Adam Carroll, and Karen Poston – the tunes are from relative unknowns like Melvern Taylor, JJ Baron, and Graham Weber. Stylistically, the material hews close to Cleaves' understated storytelling, yet only occasionally does it grab the head and heart the way his own compositions do. This is likely related to the disc's laid-back production. Cleaves is an unremitting folkie, but where Poston's original "Flowered Dresses" is sunny, the version here is almost a dirge complicating its meaning. This sense of melancholy permeates Unsung, but Cleaves' sense of humor and offbeat style rarely pokes its head up here and goes missed. Longtime Cleaves sideman and guitarist Michael O'Connor provides two songs, and his "Devil's Lullaby" stands apart as a striding roots-rock anthem. While deserving credit for bringing these songs and their writers to light, Unsung will probably stay just that.