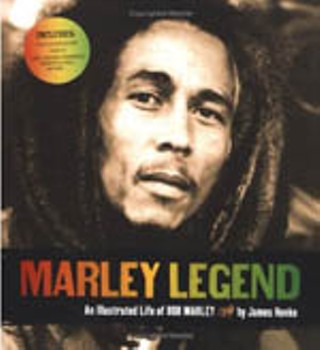 Why did James Henke boil down the biblical life and times of one of the 20th century's most important musicians into the equivalent of a pop-up children's book? Because he can. The Rock & Roll Hall of Fame's chief curator became friends with Bob Marley's chief biographer, the late Timothy White, whose many pressings of Catch a Fire remain the definitive account of reggae's immortal figurehead, when both writers were on staff at Rolling Stone in the Seventies. Henke never interviewed Jamaica's first son, but his access to Marley memorabilia – posters, handbills, backstage passes, etc., reproduced and inserted here – as well as the superstar's estate, obviously facilitated this vanity project. Primary artifact of interest: a 50-minute CD pairing two Marley interviews from the Seventies. The casual, question-dodging first chat from 1973, excerpted from an official Tuff Gong release (So Much Things to Say), places in sharp relief the better, longer, and more formal second Q&A promoting 1979's Survival. Without the accompanying transcription, Marley's wily rebelliousness would be unintelligible: "Remember, after going through slavery, you come back and sing about it. The white man sell it and make the money off it." The translation inadvertently calls attention to all the dreadlocked patois and religious fanaticism Marley kept out of his simple songs. In that light, Henke's ability to explain Marcus Garvey, Hailie Selassie, and Rastafarianism in three paragraphs might be legend.