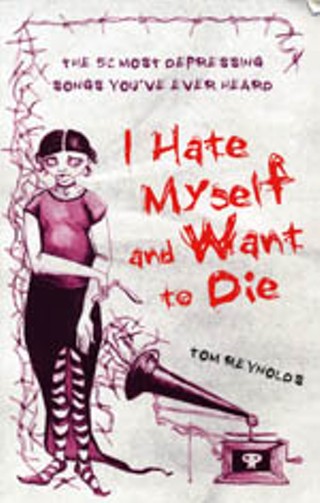 I Hate Myself and Want to Die: The 52 Most Depressing Songs You've Ever Heard

East Texas DJ turned writing/producing Hollywood TV hybrid Tom Reynolds investigates what takes a song from mildly dispiriting to barrel-swallowing suicidal (sorry, Kurt), employing both profuse sarcasm and better-than-average musical analysis. A depressing song need not be awful – "Strange Fruit" and "Sister Morphine" are here alongside dreck like "You Don't Bring Me Flowers" – but it almost has to have a key change, a phenomenon Reynolds labels brain concussion modulation (BCM). Entertainingly grouped into chapters like "If I Sing About Drugs, People Will Take Me Seriously," "She Hates Me, I Hate Her," and "I'm Telling a Story Nobody Wants to Hear," his 52 finalists are as disparate as Metallica's "One" and Terry Jacks' "Seasons in the Sun," but they're all pretty damn depressing. The sheer misery of compiling such a list probably explains why Reynolds' prose is frequently as overwrought as the tunes he exacts such relish in disemboweling: Celene Dion doing Eric Carmen's "All by Myself," a bleak prospect indeed, is "like watching a Huey helicopter being used on a fox hunt." Reynolds takes special delight in blasting Burt Bacharach collaborator Carole Bayer Sager, but his winner is Newsong's 2000 AC hit "The Christmas Shoes," which is "more depressing than Jim Morrison puking in front of a naked Indian in a Paris hotel room." Well then, pass the ammo.