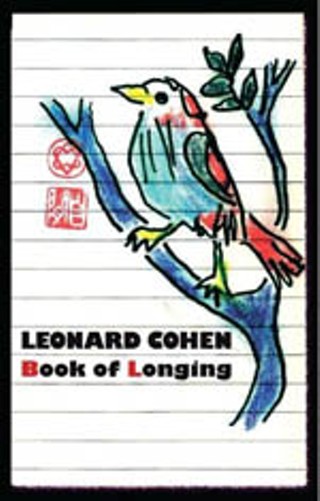 Leonard Cohen's new collection of poetry finds him not, as some fans might imagine, wandering frozen plains in search of salvation, but rather a mere mortal, trapped in a room with "the remote lost somewhere in the bed." Book's tone is best captured by the words inscribed above a self-portrait: "I never found the girl. I never got rich. Follow me." The longing is still there, but it's coupled with a liberating sense of resignation, of plunging one's hands deep into the earth and coming up with little more than words. Still, light gets in through the cracks, and though Book of Longing has its share of sorrow, it's of an edifying, not despairing sort. "You are not the one I've stopped looking for," he writes in one poem, but it's clear that giving up the search isn't tantamount to giving up – a sentiment befitting Cohen's Buddhist conversion. A more carefully curated selection of Cohen's illustrations would've been nice; as is, the pages are sometimes clogged with layered, repetitive doodles and drawings that seem to have been executed in MS Paint. In truth, this is more of an anthology, lacking the cohesion a smaller collection might have offered. Still, it reaffirms Cohen's mastery in the domain of desire, and devotees will not be disappointed. The only drawback is that it can't be listened to in the dark.