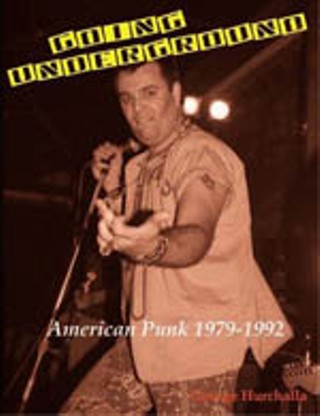 Hurchalla gets it right for using Idle Timer Dixon Colbourn's blazingly punk rock, Cash-esque photo of Randy "Biscuit" Turner, late of the Big Boys and this earth, as his cover shot. This second edition is dedicated to both of those Austin punk icons – now presumably gigging across the great wide open in a winged Ford Econoline with Will Shatter, Joe Strummer, et al – and includes an additional chapter on the Austin/Texas scene that's invaluable, both as historical record (the perpetually inclusive Big Boys contretemps with homophobic DCenesters Bad Brains is thick with menace) and as decidedly un-rose-tinted backward glance (MRR No. 6 sported the arresting cover header "The Dicks: A Commie Faggot Band!??!"). Trying to encapsulate the entirety of American punk rock, even with the 1992 cutoff in which Hurchalla wisely caps this exhaustive look-back, makes Hercules' Augean stable-boy routine seem positively fun, fun, fun. Nevertheless, Hurchalla's efforts are impressive, given the fragmented and regional nature of American hardcore in the Eighties, a time well before the Web made for a truly Punk Planet. Mimicking an Eighties-era tour, it meanders all over the place without ever fully wearing out its welcome. To paraphrase the Butthole Surfers: Regret is not having been there the first time round.