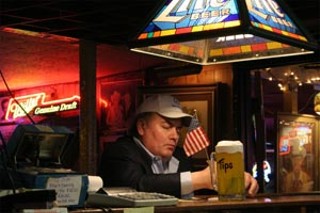 Clifford Antone at the Broken Spoke (Photo By Winker)

It looks like a typical Tuesday night at the Broken Spoke's twice-monthly Hardcore Country show. Alvin Crow and his all-star lineup, including the venerable Austin honky-tonk's owner James White, reach into their buckskin bag of traditional country and make Hank Williams sound MOR.

Pinetop Perkins, who'll be 93 in July, shuffles inside the club with Roslyn, his gregarious caretaker. At his usual table – the large round one in front of the makeshift bandstand in the neon-lit front room – he tips his tan cowboy hat and smooths his white shirt. Reaching for the bag of CDs he sells at every show, he holds up three, splayed like a deck of cards. This is how Perkins supports himself these days. Camille, one of the youngest patrons at the Spoke, passes the white plastic tip jar around.

"Better tip or she'll cry," Crow warns. "And if that don't make you tip, she'll cuss you out."

What's not typical on the night of May 23 are the long faces on the patrons, many in tears. There's an empty chair by Pinetop where Clifford Antone always sat. Yes, the club owner – whose worship of the blues guided his life – unabashedly adored the Broken Spoke and, in the last few years, spent nearly as much time at the country dance hall as he did downtown at his namesake club. With indie rock bands playing Antone's tonight, Clifford's friends knew where he would've come, so the Spoke is filling with mourners.

"This is one of Clifford's favorite songs by one of his favorite artists," Alvin Crow drawls. "He'd always get up and sing it with us."

Alvin nods, the dreadlocks under his cowboy hat bouncing, and with James White at the mic the band cranks up Hank Williams' "Hey, Good Lookin'."

Clifford Antone died only hours before the show, and the Hardcore band plays Doug Sahm and Slim Harpo in his honor. Now, it's time to move the show into its non-Nashville course with Hank Thompson's "Wild Side of Life" seguing into Kitty Wells' "It Wasn't God Who Made Honky Tonk Angels." Clifford would have loved it.

The federal prison outside Bastrop is probably what people imagine "country club" prisons to be like. It looks high school benign from the nondescript country road outside, yet as you enter it takes on an oppressive feel. There's an athletic track, but the fences are extraordinarily high and topped with barbed wire. The signs let you know the line of freedom is suspended.

You can't take anything into the prison with you except your driver's license and a clear plastic baggie filled with quarters. You must be on an approved list to be a visitor and the sign-in is a merciless inspection of you and your license. You have to wait to be called, walked through a heavy-security metal detector, and wait again. Then you're delivered into a grim, double-locked holding area before being led across a short concrete walkway to the visitors' room. 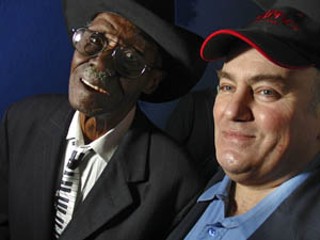 The visitors' room is a sterile room with hard-shell chairs that resemble the waiting room for the principal's office in high school, only with armed guards and vending machines. You bring quarters because visitors can buy treats, soft drinks, and microwavable meals for prisoners. The prisoners can't approach the machines themselves, only visitors. Clifford would stand a few feet away and point to what he wanted.

Even in prison, Clifford carried the weight of royalty. The guards knew who he was; some of them were club regulars. They'd keep him up on the venue's night-by-night happenings the same way his sister Susan did with regular phone calls. When it came time for Clifford to call in the evening, Susan would get out her cell phone and keep it handy. Often she'd gather friends around her and pass the phone so we could all say hello. During one of these conversations, I conducted a club anniversary interview with him by squeezing a tape recorder to the phone. Clifford was always ready to talk.

On Christmas Day 2002, I drove out to the prison on a whim, figuring he might like company. Unprepared for the visit, I scraped together all the quarters I could find, raiding my laundry stash, emptying out old purses, and stopping at several convenience stores to break bills. It was Christmas Day, for God's sake, and my friend deserved better than institutional swill, even if it was just Stouffer's in the microwave.

The prison was fairly busy that day with visiting families, mostly Hispanic. The children's play area was full of kids, decked out in red and green velvet dresses and little suits with ties for the holiday. I surrendered my driver's license to the guard at the podium and asked for Clifford. "Is he expecting you?" asked the guard who scrutinized my license. "He's out walking around the track."

It took a while to bring him in from the field and go through the search process all prisoners went through before and after visits. Clifford walked through the door into the waiting area, wearing the plain prison uniform and looking curiously for who'd come to see him. He got teary-eyed when he saw me and that hug was one of the longest, most heartfelt we shared over 31 years. For nearly two hours we talked, reminiscing as we always did, most of it about the Sixth Street days.

At the end of the visit, he made an offhand remark about the surroundings, and it was clear just how humiliated he was by the circumstances. He bore indignity with grace. I mumbled something stupid about how at least the room was clean. Clifford gave me a dead look.

"This is the pretty part," he gestured to the plain painted cinder-block walls and uncomfortable blue chairs. "You don't wanna know about the rest."

Clifford Antone spent about three years in Bastrop starting in 2000, his second experience at doing time for marijuana. It made him a folk hero of sorts, a rebel who lived outside the law, but he neither wanted nor encouraged that image, especially afterward.

That stint in prison changed Clifford Antone. The man who emerged in 2003 was humble, grateful, and determined to give more back. He embraced his community service with American YouthWorks with joy, his commitment to the organization for at-risk youth exceeding the terms of his parole. He began teaching the "History of the Blues According to Clifford" at the University of Texas. For a period of time after his release, he couldn't set foot into the club, so his friends at Güero's restaurant gave him a job as a greeter. He accepted it enthusiastically, holding court there nightly until the magic day came that he could once again walk into the house that Muddy Waters built.

The night of his return to his club, he donned a suit and baseball cap, his usual dress attire. A couple of TV camera crews were around for the occasion, and he stopped to talk with them outside the club, ever the diplomat. As he entered, well-wishers, musicians, and staff swarmed about him, welcoming him home. He hugged, greeted, shook hands, and made his way across the club to backstage. 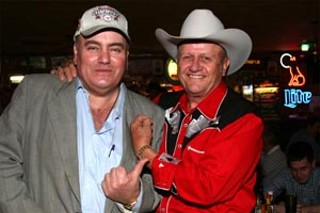 It was the obvious question, "How does it feel to be back?"

Clifford shoved his hands deep into his pockets and glanced around to the posters on the wall, the beat-up couch, the empty beer bottles, overturned plastic cups, and cigarette butts on the floor.

It's after midnight in downtown Austin on this very early Wednesday morning. From the south banks of the Colorado, the Towers of Town Lake stand tall. This building is where Clifford lived, and where he died, right in the heart of Austin. There are lights burning in its many windows, but the brightest one was extinguished in a heartbeat on Tuesday, May 23, 2006.