Clifford Antone called the tune and the world danced 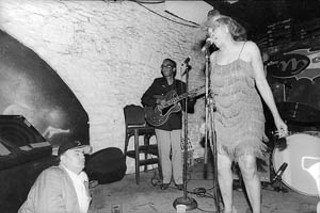 Clifford Antone didn't invent the blues. Hell, he couldn't even play the blues very well, although later in life he did become a decent bassist. Yet he understood blues well enough to soak up the sound once he figured out that real blues didn't come from Led Zeppelin and Eric Clapton, the two seminal British acts that led him down the path.

Blues came from black folks he grew up around in Port Arthur, Texas; from bands like the Fabulous Boogie Kings he heard as a teenager whenever he crossed the Sabine River to go party at places like the Big Oaks in Vinton, La., where you didn't have to be 21 to buy a mixed drink; and from similar places like the Mississippi delta, the south side of Chicago, Beale Street in Memphis, and the wide open spaces of North Texas. He got all that so well that he staked his career on it.

He came to Austin to run an outpost of the family business, Antone's, which featured fine imported foods. If you ever walked into the place to buy a sandwich late in the day, you'd be just as likely to find the Antone kid in back, playing blues records or picking at a stringed instrument, as you'd be to witness him dolling up a hoagie. But his heart wasn't in it.

That much was clear in 1975, the year he opened Antone's Home of the Blues, his nightclub at the corner of Sixth and Brazos in what was once an old furniture store (I swear you could still smell the bat guano on opening night).

Austin's music scene was already well-established. Places like the Broken Spoke, Armadillo World Headquarters, and Soap Creek Saloon were already burnishing national reputations. The latter two featured blues acts now and then as part of their music mix, bringing in folks like Lightnin' Hopkins, Mance Lipscomb, and Clifton Chenier. No place came close to what Antone had in mind.

His place was different. For one, it was on Sixth Street, whose businesses at that time catered almost exclusively to older African-Americans on the north side of the street, and Mexican-Americans on the south side – pawn shops, porn shops, clothing stores, and the kind of rough bars that college kids didn't venture into. To overcome the perception that Sixth was a bad part of town, and to make clear he was no Jerry Jeff Walker fan, Antone encouraged his waitresses and bartenders to dress up and look sharp. It was a shot across the bow straight to the heart of Austin's hippie aesthetic.

Unlike the progressive country fever sweeping Austin and the rest of Texas, his place was going to be nothing but the blues. The format proved not the smartest of business decisions in the end, but it sure sounded good along the way. Some nights there were more people on the bandstand than in the audience, like the time Bob Dylan watched the T-Birds. There were also nights that came close to blowing the roof off. He persuaded Clifton Chenier & His Red Hot Louisiana Band to blow off Soap Creek and christen his place with a hot, sweaty crowd. Sunnyland Slim and Muddy Waters and Eddie Shaw & the Wolf Gang were not far behind.

Word traveled fast among touring musicians. Antone's would treat you right, no matter what kind of financial bath its owner was taking. Some musicians stuck around for days – weeks – past their play dates, particularly Luther Tucker and Hubert Sumlin, who passed along their wisdom and knowledge to a generation of young blues players including two brothers, Jimmie and Stevie Vaughan, while boosting the reps of underappreciated characters like Bill Campbell. The night Stevie Ray Vaughan sat in with Albert King, everything changed.

Respect was part of the code. The club made national news the night Bobby Blue Bland was playing and Boz Scaggs, a noted San Francisco musician, attempted to breach the security line backstage to see him. Antone was having none of it. Bland was resting and was not to be disturbed. The end result was a photograph in Rolling Stone of a cold-cocked Scaggs laying on Brazos Street.

When Clarence "Gatemouth" Brown was booked, he played fiddle and ran his band through Cajun and country songs rather than playing guitar on the kind of jump blues he popularized with "Okie Dokie Stomp" in the 1940s. Antone spent most of the show on the side of the stage, stomping his feet and yelling, "Play the blues!" to no avail.

Antone's relocated to Anderson Lane, into a modern suburban facility with zero funk factor, then to a cozier room on Guadalupe near UT in a former Shakey's Pizza, with an Antone's record shop and record label across the street, before landing at its current Fifth Street location. By the end of the 1990s, Antone's was Antone's in name only. What marijuana arrests and prison time didn't take away, Clifford lost, sold, or pissed away himself.

But you couldn't take away his heart. Antone grew into the role of the elder statesman with unexpected grace. He became best buds with Doug Sahm, once his mortal enemy because Sir Doug was all about Soap Creek, and Antone was Antone's. Both their careers were revived in the 1980s with a string of soulful Texas blues albums Sahm did on the Antone's label that actually sold. More importantly, the albums brought together Sahm and Soap Creek loosey-goosey, T-Bone west coast hippie school with Antone's more trad Chicago school of players like Derek O'Brien. Antone honored Sahm in death more effusively than anyone in Austin. He made up with Gatemouth Brown too and booked him on numerous occasions while his club developed a reputation as a showcase for all kinds of soulful roots music.

Antone taught classes on the blues, had a film made about him, was working on a book, and spent a fair amount of time nurturing kids. He emceed shows at the club, especially fundraisers, which is when I usually saw him. He became Pinetop Perkins' guardian. To the end, Antone carried himself like a godfather.

Yet, when I close my eyes, I see him hanging at the baseball card shop he owned with his bud Boo Boo; rifling through the 45s and 33s in the back of OK Records with Leon – his Wildman friend from Nederland – Doty, and all the Good Rockin' Dopcee's Fabulous Twisters; ribbing Doug Sahm while Doug Sahm was ribbing him; or leaning against the wall with his boys in front of Antone's on Sixth late in the afternoon during a soundcheck, the vibrations of instruments pouring out into the street. All of them would be wearing the nice oxford shirts he bought for them at the men's shop across the street, shirt tails out, Clifford with a cool, satisfied smile.

I saw Clifford a few weeks back at the Broken Spoke. He was buddying around with Eddie Wilson and James White. It didn't cross my mind until just now that they were mortal enemies back when Wilson ran the Armadillo and Antone was just getting started in the club business. Neither set foot in the other's room. And you would never, ever see Antone at the Spoke, much less spot ol' James White hanging at Antone's, either. But here they were, three blood brothers, laughing, backslapping, shaking hands, being the larger-than-life people they are. Attrition, time, and the common love of music work wonders.

Clifford Antone might not have set out to be a wise man of music, but he did just fine. Then the light went out. Just like that. But the sound – the pounding, strumming 12-bar march to the lowdown, the dance that so many of us in Texas have known for 100 years – its life extended in no small part by a kid from Port Arthur, is still coming across loud and clear.