The Riverboat Gamblers take aim at their enemies 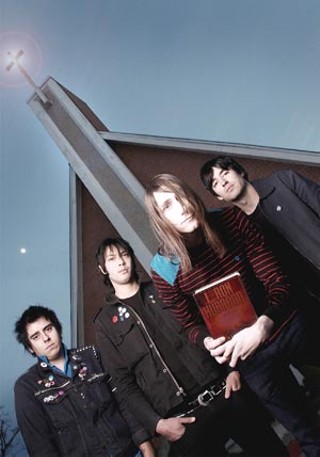 The Great State of Texas, whose image has been battered and bruised more than a champion bull-rider in recent years, couldn't ask for better cultural ambassadors than Austin's Riverboat Gamblers. Picture a dank, dilapidated Parisian hostel, no doubt hundreds of years old, walls in disrepair, pipes exposed, naked light bulbs dangling from the ceiling, bunk beds arrayed barracks-style in the rooms. Squats such as these, for acts who haven't quite worked up to tour buses and five-star hotels, are often the only European alternative to sleeping in the van.

One night in 2003, touring second album Something to Crow About (Gearhead), the end was in sight for the Gamblers. Before boarding that plane back to God's Country, there was one last all-day drive, one more show, then an all-night slog to the airport, the band praying their lack of rest wouldn't deposit them at the bottom of some picturesque Alpine ravine. As their final chance for at least the next 36 hours, all they wanted was some sleep.

They might have gotten it, too, except such establishments are also popular with amorous local couples too broke or cheap to spring for a hotel room. Singer Mike Wiebe hadn't even had time to drift off before, in his words, "this French guy and his girlfriend broke into our room and started fucking in the bed right next to me." Bearing in mind he was still a guest in their country, and after discussing the situation with a bandmate, he decided to ignore it.

"I crawled back into bed, and within arm's reach I see this hairy French ass going up and down," Wiebe recounts. "I realized, 'I can't handle this.'"

Not on speaking terms with the French tongue, the frontman woke the band's Dutch tour manager and asked him to request that the lovers kindly take their copulation elsewhere. "You do not have to speak in French," said the girl. "I understand, and it is fine. We will leave."

Problem solved? Not quite.

Wiebe politely thanked mademoiselle for her consideration, and she assured him, "It is fine, I am not angry." Pregnant pause. "But 'e is." At which point her companion began hurling every last bit of French invective under le soleil at the exasperated Texans. ("It always sounds mildly feminine," muses Gamblers guitarist Fadi al-Assad.) Still playing the gracious foreigner, Wiebe let him rip, figuring monsieur had a right to be pissed off because "he probably didn't get a nut." But then, suddenly speaking perfect English, the Frenchman crossed a line: "Fuck you and your useless Texas."

As they say, them's fightin' words.

"That really got to me, because we got that the whole tour: 'You're from Texas, why do you let George W. Bush be president?'" Wiebe says.

He learned that, however much they may love the music, Europeans don't want to hear that a punk rock band from Texas barely scraping by has minimal influence on the American electoral process. They also don't want to hear the perennial Yankee retort that if not for the USA, they'd all be eating sauerkraut and speaking German, but Wiebe couldn't help himself.

"We've traveled all over the world now, and Texas is my home," he says. "It just came out. I had been wanting to say that the entire tour, but always as a joke. Now I actually meant it."

Three years later, the incident is immortalized as "The Gamblers Try Their Hand at International Diplomacy" on the quintet's new Volcom LP, To the Confusion of Our Enemies. For reasons that have nothing to do with increasingly unpopular presidents or an enraged Frenchman – who was, Wiebe notes, eventually "pushed out" of the Gamblers' room – they're proud of their heritage.

"I think [Texas] bands are a lot more aggressive," remarks bassist Pat Lillard, gathered with Wiebe and al-Assad as the third founding member of the Gamblers. Absent are second guitarist Ian MacDougal and Dallas-dwelling drummer Mark Baker. "We make our scene, we don't have people making it for us like in Hollywood and New York."

Before they became one of the Lone Star State's top-drawing punk bands, before they relocated from Denton to Austin for convenience's sake, and before they were written up in the latest issue of Rolling Stone as one of SXSW 06's five breakout bands, the Gamblers played because it was fun. It really is that simple. In Denton, after all, besides skateboarding and playing Street Fighter 2 at the local arcade, there wasn't much else to do.

"Fadi and I were in a van huffing gas on top of a scabies-ridden mattress," remembers Lillard, perhaps exaggerating the squalor of the Gamblers' summer 1997 origins. "He and I were in another band at the time, and we didn't want to be in that band, so we started this one." Wiebe came aboard exactly one practice and Olan Mills photo shoot later.

Though the small college town north of Dallas-Fort Worth has always been better known for bands that prefer My Bloody Valentine to the Misfits, at the time Denton also housed a healthy, if extremely underground, punk scene. At some point, Wiebe, Lillard, and al-Assad were all in four or five bands at once. Instead of clubs, shows took place at a handful of houses, including Wiebe's and Lillard's. Someone always seemed to know someone who knew a touring band coming through the area, which is how At the Drive-In, Jimmy Eat World, Dillinger Four, Scared of Chaka, Rainer Maria, Alkaline Trio, and many others wound up rocking various North Texas living rooms. Since the shows were happening at their houses, the Gamblers had no problem inserting themselves on the bill, with one important difference. Buried under a tide of plaintive guitars and hyperconfessional lyrics, they decided sloppy and stupid was more their speed.

"There was a lot of really, really pretentious emo [at the time], just way over the top," says Wiebe. "[Bands] had names like the Snow Is Falling on the Wet Trees on Sunday. I think part of the appeal of the Riverboat Gamblers was it just seemed kind of dumb."

Wiebe likewise noticed a response from the Gamblers' audience none of his other bands claimed. Though several side projects remained somewhat active, even today, the trio focused more and more energy on the Gamblers, recording a 7-inch and venturing outside Denton to living rooms, basements, and even the occasional club around the region. In early 2001, they headed into Austin's Sweatbox Studios with DIY icon Tim Kerr. The self-titled result on D.C.'s Beatville Records, now so obscure even the band members can't find a copy, took all of three days to record. It features a cover of "Slug," in tribute to the then-recently passed Joey Ramone, and 11 other firecrackers exploding with nervous energy.

"I think we played one song, and Tim came out and said, 'You gotta go buy some beer,'" remembers Lillard. "'Loosen up.'"

Seasoned by two years of steady touring, the Gamblers again enlisted Sweatbox and Kerr for Something to Crow About, which took six days this time and remains in print. On it, their footing is much firmer, especially on balls-out rave-ups like "What's What," "Rattle Me Bones" and "Hey! Hey! Hey!" Wiebe's true-life tales of razor blades, pills, posers, and suicide notes play out as harrowing as they are invigorating; there's even a love song, "Catch Your Eye."

"That record was the first time we had ideas," chuckles Wiebe.

Something to Crow About, and its reception in punk-rock circles, was the Gamblers' first inkling they might have a future as a band. They moved to Austin, where, says al-Assad, "instead of trying to take time off work to tour, we just try to find work when we're at home." They were on the road so much at this point that full-time employment was a fantasy anyway, and labels began to take notice. Big labels, that in the wake of the Strokes, White Stripes, and Hives each wanted their own raucous "garage-rock" band.

Things chilled somewhat after the Stripes' Elephant was the lone follow-up to maintain mainstream momentum, but the Gamblers' experiences being wooed by music-biz "douchebags" are all over the new album, most prominently on "The Biz Loves Sluts" and "The Art of Getting F#@%ed," which Wiebe calls "kind of our theme song." They went with Volcom because the A&R rep for the Orange County label (also home to Austin's Single Frame) genuinely liked the music.

"Anything we know about the music business, we know from learning the hard way," says Wiebe.

Working with producer Mudrock (Alice Cooper, Avenged Sevenfold), the Gamblers recorded To the Confusion of Our Enemies in seven weeks last fall at his studio in Highland Park, Calif. It was, says Lillard, "the time of our lives." If it sounds slightly slicker than their first two albums, it's because band and producer had ample time to explore every last detail of the recording process.

"Mudrock's wife Ai was part of the production team, and she made it sound like fuckin' angels," crows al-Assad. "That's what you're hearing, man."

Even as their fortunes continue to improve, the Gamblers know all too well how much it has cost. Their high-voltage live shows have frequently resulted in bodily injury, most often to Wiebe (see sidebar "Rattle Me Bones"), but most seriously to Lillard. At San Francisco's Parkside in 2003, on the first song of the set, Wiebe whipped his microphone around by the cord and caught Lillard flush in the mouth. It knocked out four teeth, to the tune of several thousand dollars in dental work and weeks of recovery time, but Lillard kept playing for four songs before nearly passing out from blood loss.

"I looked over at him, and it looked like he was vomiting blood," says al-Assad. "Except it was coming straight out of his mouth, and he was seriously white, like a sheet of fucking paper."

The emotional price has been just as steep.

"I've lost a girlfriend, I've lost my license, my car, jobs, school," says Lillard, "but I have great friends that let me stay with them and give me jobs when I'm home."

The Gamblers still sleep on floors on the road, and at home hold various part-time positions in the construction, dish-washing, food preparation, and telephone-solicitation industries. Whenever Wiebe, who has a bachelor's degree in psychology, wonders if life in the straight world would be easier, he remembers friends from the old days who've gone that route and approach him at shows to tell him how much they've come to regret it.

"Some of them have kids and families, and they'll say, 'I am so fucking miserable,'" he says. "'Please keep playing in a band. I'm so happy that one of my friends is doing something that he likes because I hate my job so much. I hate the insurance company that I work for.'

"I don't know what to make of that," Wiebe admits. "But I'm glad I'm not working for an insurance company."