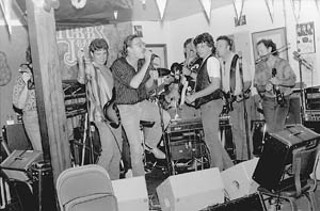 My story of Jesse Taylor doesn't all fit together chronologically, and I want to call him and ask what happened when. It's hard to look at from here, in places. There's wreckage I regret and will probably gloss over, things I never took into account at the time. My story is full of myth, because he was.

I have a beautiful snapshot of Jesse, age 16, in a tree, bare-chested, with a mustache, looking 30. We called him Jesse Hercules. I don't remember if I was ever around him then, but I knew of him because of stories that passed among friends.

I was living in Berkeley with my daughter, Elyse, where we landed after I accidentally graduated from Texas Tech in early summer, 1967, and took off for Haight-Ashbury and the Summer of Love. Most of our friends were still in Lubbock, but stories passed lightning fast. Jesse rode freight trains. He was going to ride the trains to Nashville and marry Aretha Franklin. He was never not a guitar player. He'd just picked it up one day and could play like magic. He joined the carnival. He came from a family of Czechoslovakian acrobats.

The T. Nickel House Band got a gig in Berkeley and stayed with us: Jesse and John Reed, Tiny McFarland, and my ex-husband and baby's daddy Jimmie Gilmore. After the show, we were all at our house. It was the first time I was ever around Jesse for any length of time. We started talking. We went upstairs to my room pretty soon after that. He told me he loved me before he closed the door, and I told him I loved him too, and it was true and still is.

He was 19, and I was 26, a young 26. He was the most grown-up person I'd ever known. Not in the terms of the world I was raised in, but in those of the world I wanted to live in. He wasn't afraid of anything. He knew how to handle himself. He was real. We – me and most of our friends – were dreamers and thinkers who lived in each other's living rooms and dreamed and thought. He was living in a real world where he could go anywhere and do anything he thought up to do. He was a natural athlete, moving with the wind over the tops of the railroad cars.

A few days later, we got a driveaway car and ran off together, Jesse and Elyse and I, leaving the band staying at my ex-roommate's house. We had a wreck on the highway in Arizona. I grabbed Elyse, and he grabbed me, and we were all ejected out the front passenger door. We all had the same injury, a laceration behind our ears, but Jesse's was the deepest. It cut his auditory nerve. He was already part deaf in his good ear. He couldn't hear the music any more, but he said he could feel it.

My parents came to get us. We stayed in our houses in Lubbock for a few days, and my favorite uncle was appointed by my family to talk me out of Jesse, but nobody could have. 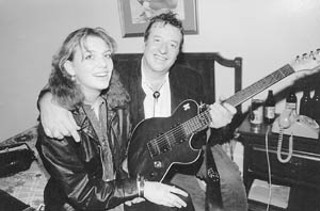 Jesse's dad woke him up when he was maybe 10, and said goodbye, told him to take care of his mama and little brother and sister. We were all trailing wakes of disappointed, distraught parents, but Jesse was already grown. He loved his family like we weren't grown up enough to love ours yet.

Our friends drove up from Austin and rescued and took care of us. We moved into a dank basement apartment on Rio Grande. We moved the beds and table out under a tree and slept and ate outside. My sisters lived one street over. He played a gig in Houston, and we spent the night in the club – I wish I could ask him which one – on huge beanbag chairs for beds.

We moved back to Berkeley and lived with my sister Cindy. We put up glow-in-the-dark stars in Elyse's room. We refinished an old dresser someone had parked at our house. There was beautiful burled wood under the paint. We invented sandwiches. He was tickled with my sister and my daughter. He came home with a tattoo on his arm of a skeleton in a cowboy hat and left purple and green scabs in the bed. We bought a '56 Ford for $50 and drove straight to the ocean, then to the mountains before it threw a rod the next day. We lived a quiet, dreamy life in those sunny upstairs rooms.

Nobody had ever been as interested in me as Jesse was. He was tickled with everything about me. He liked my singing. (Nobody else did, and there were reasons for that, which Jesse had the grace to see past, I guess.) We made tapes of me singing Merle Haggard songs, him playing guitar and singing harmony.

We didn't have any money or transportation, so he took Cindy and me on the freight trains down the coast to Tijuana, and back. It was my favorite vacation.

One time we had a fight, I don't know what about. He left and got publicly intoxicated and put in the Oakland jail. Cindy and I sold coke bottles and borrowed money and took the bus out there to get him out. But he was still mad and wouldn't come out. I remember waiting a long time, and then riding home on the bus, all of us.

Everywhere he went, people loved him. He knew the power of encouragement and loved to dish it out. Mary Welch of Mary y los Curanderos is one of Jesse's girls.

Jesse died good, with his beloved girls around him, with his beautiful grandkids, in the love of a great woman, Kim. I heard the funeral was packed wall to wall with people Jesse loved in his big way. It was the first time anybody's seen Butch Hancock cry. A freight train was pulling out of town as they put him in the ground.

Jesse saved my life. He gave me myself. He made me real with his love. He's been alive in me since I was lucky enough to lay eyes on him. Wish I could call him on the phone.

Lubbock-born singer-songwriter Jo Carol Pierce is the author of the play Bad Girls Upset by the Truth and is currently working on a sequel. The 1996 album Across the Great Divide was recorded in tribute to her music. Pierce performs Tuesdays at Momo's.