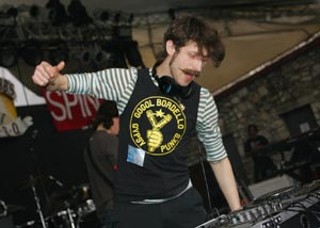 Ian McCulloch wrote those words at least a year before a handful of enterprising Austinites thought it might be fun to have all their favorite bands play here the same weekend, but no one sentence better describes what SXSW has become 20 years on: a Sisyphean struggle to keep going, going, going, clinging to the dogged belief that, despite the immutable laws of time and space and nature, somehow you'll be able to take it all in.

This, of course, is folly. The best, and increasingly only, way to handle SXSW is to stay put. Sometimes this strategy backfires – neither Rosanne Cash, Lyle Lovett, nor the Pretenders brought their A game to Stubb's Saturday night – but just as often it leads to complete rapture, as it did for Gogol Bordello and Flogging Molly at Emo's Thursday. Watching Molly's Dave King, then Gogol's Eugene Hutz whip the already-rabid crowd into a frenzy was worth the price of a badge several times over. Alternately, walking into venues at random often yields happy results, like it did for yours truly with Chicago's Bottomless Pit at Club de Ville and Phoenix's Digital Leather at Beerland. 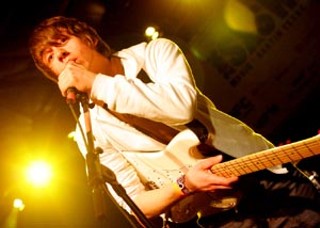 Boy in the hoodie: the Artic Monkeys' Alex Turner (Photo By Gary Miller)

SXSW also makes bands you've seen dozens of times come through with career-best performances, like Austin's the Arm and Sound Team Wednesday afternoon at Emo's. For the Arm, it was the beginning of an eventful week. Rolling Stone scribe David Fricke took furious notes at their Blender Balcony show that night and left with one of the final five remaining copies of 2004's self-titled debut. Follow-up Call You Out is due next month on local label Indierect.

For the second year in a row, the prickly post-punk quartet was involved in a brawl, this time when they rushed the stage to rescue their instruments from Cleveland's This Moment in Black History at the addVice afterparty Thursday night at Tillery Street Theater. Eventually the cops showed up, and a mechanic from the shop next door brandished a baseball bat in the parking lot. "I had to hustle my gear out the back alley," recounts frontman Sean O'Neal. "It was pretty fucked up." Elsewhere, Matt Drenik of Lions broke up a knife fight outside Trophy's Tuesday night by simply (and falsely) claiming to have kids. 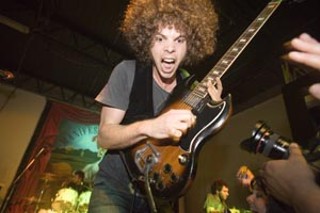 Sorting through the aftermath one week later, SXSW Managing Director Roland Swenson said he felt like the festival went "pretty well," with no major catastrophes like last year's server crash that left registrants stranded for hours in line waiting to pick up their badges. The grumbling that SXSW is spiraling out of control was louder than ever this year, but Swenson isn't buying it. "I don't think so," he says. "There's built-in limits. There's only so many hotel rooms or seats on airplanes. Next year, there'll be 400 more hotel rooms right by the Convention Center."

By all accounts, they'll need them. "People said SXSW was too big 10 years ago," smiles Swenson. Since then it's only gotten bigger, thanks in large part to the corporate-sponsored day parties – some, like Red Bull and Levi's, rented vacant venues for the entire week – that have proliferated like so many mushrooms after one of our all-too-infrequent Central Texas showers. Dozens of Austin bars and other businesses have responded by hosting their own non-SXSW shindigs.

"That's an issue for us," Swenson admits. "We recognize that parties are a big part of the attraction. It's not like we want them to stop, but I wish they wouldn't start so early. There's not a whole lot we can do. All we can really do is make the programming compelling enough that people will want to go."

This may yet work itself out naturally: from what TCB saw, lines for day parties this year were much longer than for all but a few SXSW showcases, like the Flaming Lips' "secret" Eternal show Thursday and Aussie diva Sia at the Parish Saturday. Swenson believes it all comes down to timing. "If you wanted to go to Arctic Monkeys [at La Zona Rosa] and showed up with a badge at 11:30pm, you got in," he says. "If you showed up at 11:45, you had to wait in line."

Timing isn't just a matter of minutes, either. Three of this year's biggest buzz acts – the Monkeys, KT Tunstall, and Wolfmother – all played last year to much smaller crowds and a modicum of their 2006 hype. Wolfmother's 2005 showcase, in fact, got them signed to Interscope, proof that SXSW's original mission – "Musicians in Search of Discovery," read The New York Times headline Monday – holds true all these years later. Next year, will it be the Ark? The Arm? Voxtrot? Dr. Dog? Apollo Sunshine? Hot Chip? Crom? Tapes 'n Tapes? Or some band nobody saw except, as the Times' Jon Pareles wrote, "the right ones"? There's really only one way to find out: Come back. 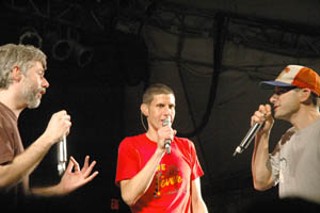 Sure shot: the Beastie Boys at Stubb's (Photo By Aubrey Edwards)

DANCING WITH THE STARS

Like you and me, celebrities love them some live music. Assorted SXSW sightings, not counting the guy from Real World: Miami working the door at Beauty Bar or VH1's Best Week Ever crew:

BEASTIE BOYS: Played Stubb's Thursday evening as rumored. TCB apologizes to those who e-mailed him for the location and didn't hear back until Monday. The server at the Chronicle's Omni headquarters had some, shall we say, issues.

BEATLE BOB: Spotted at Li'l Cap'n Travis and Moonlight Towers Tuesday at Beerland; Wednesday's Austin Music Awards; the Spin party Friday; and Riverboat Gamblers and Real Heroes Saturday. "I always seem to wind up in your paper," he mused outside Beerland. Wonder why.

DAVID BYRNE: Posed for pictures at Stubb's Saturday night; spotted several places Sunday night, including Emo's, Hole in the Wall, and a nameless club that denied him entry to use the bathroom.

KRIS KRISTOFFERSON: Sang with Jessi Colter in the van en route to the Austin Music Awards; took being drowned out by Wolfmother at Club de Ville Thursday afternoon in stride.

J. MASCIS: Rocked out (hard!) to Metallagher at Emo's Sunday.

OWEN WILSON: Enjoyed Dale Watson at the Continental Club with Dwight Yoakam last Monday, the Synthetic Pictures day party on South First Street, and hit Stubb's for Lyle Lovett and the Pretenders Saturday. "Wow, his nose really is that weird," remarked a friend.