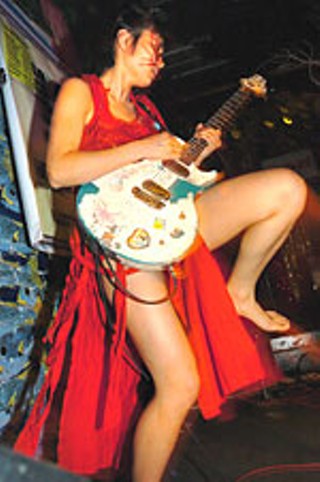 Japanese artists represented in full-force on Friday night, which is not to say that some of the nation's musical charms were not lost in translation. Regardless, it took just two out of five acts at Japan Traditional Night in the modest Waller Creek cafe at Capitol Place to eradicate most preconceptions of the Land of the Rising Sun. Before that showcase was over, meanwhile, just a few doors away, the dynamic Afrirampo from Osaka melted the faces off listeners. Only the crowd-pleasing Keisho Ohno made any reference to samurais, and anybody looking for a geisha girl could forget about it. Ohno plays a traditional instrument called a shamisen, which has three strings and was reportedly invented by the Egyptians and arrived in mainland Japan centuries later. Ohno slapped his with a heavy pick, handling the shamisen like a bass while his band laid down a futuristic fusion. These lively jazz merchants were preceded by the lovely Mika Uchizato of the island Okinaga, who plays a more primitive version of the shamisen – its body cased in snakeskin – which sounds a little like a banjo. In her homeland, Uchizato is considered a first-rate folk artist. Her plaintive songs and shepherd yelps made it clear why. Meanwhile, Oni and Pika of Afrirampo came on like sisters from another planet. Dressed in red minidresses, wearing face paint, and chanting, "Flamingo pee-pee on the rainbow," their Dadaist punk left not a few jaws on the floor. They had to be seen to be believed.