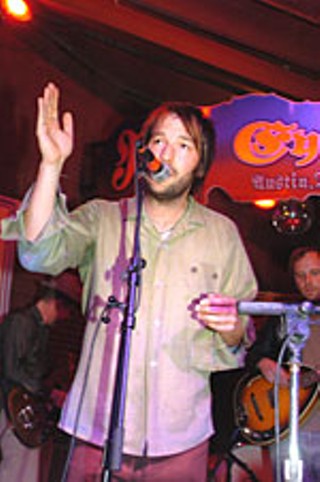 San Francisco bard Kelley Stoltz is a funny guy. You see the cover of his latest album, Below the Branches (Sub Pop), and you think maybe he's a Ben Folds or a John Mayer. Instead, you get psychedelic freak-outs, bucolic folk, and a love of the Velvet Underground, all under the sway of Stoltz's astute lyrics. The former Galveston resident spent most of the set behind the piano, tweaking effects and veering between Lou Reed swagger and McCartney catchiness. Below the Branches' lite-psych leanings and Beatles-heavy drop are hard to pin on any one influence; his love of Echo & the Bunnymen was recorded on his track-by-track cover of Crocodiles, and lyrics like "Pack your worries in a suitcase" rub up against Sixties California dreaming. But Stoltz really wants to help us understand. So when he says, "Let's just listen to the amplifier buzz" minutes into the second song in a soothing whisper, it's not clear whether he's ready to rock out or free his inner child. Thankfully, it was the former. While Stoltz usually writes and records alone, his backing band kept a rollicking pace, tearing into "Memory Collector" and the bouncy "Wave Goodbye" from Branches. The final song had VU all over it, from the Moe Tucker beat to his pitch-perfect Reed cadence. He let us all know "we are groovy, groovy people" over a heavenly Echo guitar squall to end the night.