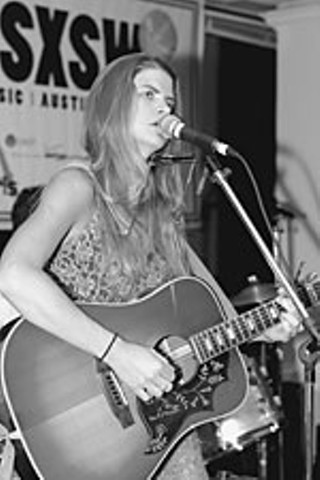 Let's get this out of the way up front: Country songstress Robyn Ludwick's family reunions are so musical they could sell admission tickets. Her hubby plays bass, her sisters-in-law are Kelly Willis and Dixie Chick Emily Robison, and her older brothers are Bruce and Charlie Robison. All that evaporates, however, when one discovers Ludwick's compositional skills. Her 2005 Danny Barnes-produced debut, For So Long, made many regional and international "Best Of" lists. Hearing her perform, it's clear these accolades aren't for studio product, but rather for an artist of fresh import. The first of six acts on No Depression's showcase, Ludwick performed in what has to be the SXSW venue with the best view: the window-walled reception room high atop Capitol Place hotel. When Ludwick began there may have been a dozen people in attendance; when she finished it was standing-room-only. Starting with the fourth track from her debut, the lonesome ballad "Stranger," Ludwick and her sunburst Gibson Dove acoustic led the snap band (lap and pedal steel, drums, electric bass, and twangy Telecaster) through nearly 10 tunes, including two new songs, the harmonic-driven "Boulevard," and the dark, old-timey rocker "Desire." These bold new cuts prove that while Ludwick's only getting started in the game, she sounds like an old hand.