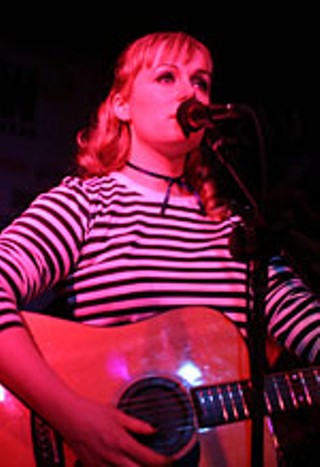 Love makes you do strange, unhealthy things, like stay under the spell of inappropriate partners for longer than you should. But then the spell breaks and you're free. Isobel Campbell broke with longtime lover and Belle & Sebastian bandmate Stuart Murdoch a few years back and has since gone on to stake her claim as a singer, songwriter, and producer in her own right. Campbell's new Ballad of the Broken Seas with Mark Lanegan comprised the majority of her debut SXSW showcase, with guitarist Aidan Kennedy subbing for the former Screaming Tree/Queen of the Stone Age. Kennedy's deep baritone offset by Campbell's sweet, soft soprano evoked comparisons to the Nick Cave/Kylie Minogue project, Murder Ballads: eerie and disarming but also a bit frustrating because Campbell's delivery is often so soft as to be incomprehensible. Yet there was no mistaking or drowning out the feelings conveyed when she made that cello sing while the rhythm swelled behind her. Campbell and Kennedy treated the crowd to a cover of Def Leppard's "Love Bites," which was actually less cheesy in this duo's hands. What's interesting is how content Campbell is to play second, third, or even fifth fiddle, letting her bandmates take the spotlight when everyone knows she's the man behind the curtain.