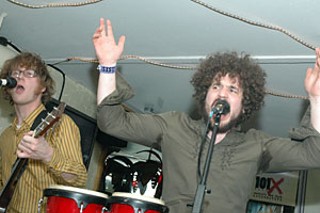 From the back of the room, Matt Focht and Mike Elsener, the two frontmen for Chicago's Head of Femur, are easily doppelgangers for Trey Anastasio and Wayne Coyne. And in a weird way, it's not a bad starting intersection for the band. Not that they sound like either particularly, but something about the combination isn't far off. They're definitely Rubber So(u)ldiers, and they could mail a taped copy of their SXSW 06 set in for their Elephant 6 application. It's post-hippie hip, but more center than left of center. They did toss in a near-poifect cover of Mott the Hoople's "All the Young Dudes." That was actually the Emeril moment where they – pow! – kicked it up a notch. They were certainly better than the audience, or at least deserved a better audience. Seventy-something hours into this, a good chunk of festivalers need to be blown a second wind, and the accelerated strum of "Elliott Gould Is in California Split" probably should've been enough to jump-start the crowd. If nothing else, they gave enough to where anyone on the in/out fence should've fallen on the side of the former. Don't think the effort went unnoticed. It just might take a little while for our bodies to catch up enough to show appreciation.