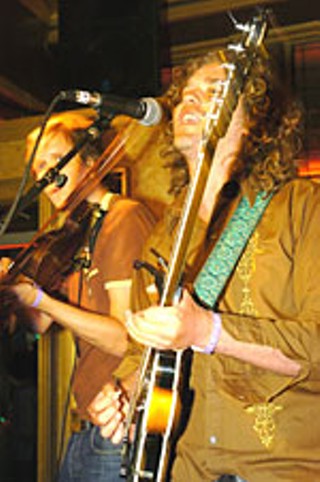 Geographically and stylistically removed from the American pop axis, Bergen, Norway's Real Ones obviously didn't grow up being force-fed Eagles songs on the radio every 20 minutes. Perhaps that's why they're able to embrace soaring country-rock harmonies and intricate guitar/mandolin/banjo interplay with such eager aplomb. Whatever the reason, the quintet slowly but surely won over their Friday night showcase. Dressed like they just walked off the set of Almost Famous, Real Ones began with "Oh My," the lead cut from their 2005 album, Home With the Girls in the Morning. "She's Got Me Good" took things in a languid, slightly psychedelic direction with a winding San Francisco-style guitar solo for the exclamation point. That gave way to "Ballad of an Old Man," a soul-stirring classic-rock anthem you sing along with after just one verse. It didn't take much imagination to envision an entire stadium swaying along. Every band should be so lucky as to have an ace in the hole like Real Ones' marathon rendition of Dylan's "Subterranean Homesick Blues." With three-part harmonies spit out over a funky backbeat, the approach might've seemed cheesy if it weren't done so well. Then the fiddle player broke into "Orange Blossom Special," and the whole thing broke into a Norwegian hoedown. After that, the smiling crowd was all theirs.