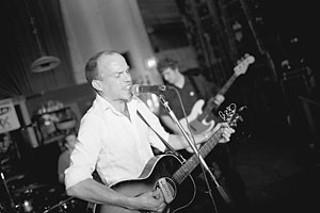 The Brakes (Photo By Mary Sledd)

"See the World" with the Kooks, or, at the very least, Brighton, England, coastal wonderland and spawning ground of everyone from Norman "Still Fat, No Longer Boyish" Cook to the Electric Soft Parade. The Kooks follow that same seaside groove, mining the pure pop sensations of being young, in love with not only a Girl, but the great wide world as well. Their Virgin debut, Inside In/Inside Out, is a bashed-on-the-breakers pirate's booty of squirming rock & roll, all aching laments and cheerfully cheeky, down 'n' dirty moans from frontman Luke Pritchard, who, if this whole music thing doesn't work out, could land a job on the WB's new incarnation of EastEnders with Flying-V ease. Demented, Clashy spin aside, it was Brighton's Brakes that threw the switches to the audience's pleasure centers, firing off one garishly tight, 90-seconds-and-under firestarter after another – an all-night disco party to rival anything else two-stepping around town at the moment. British Sea Power's Eamon Hamilton gave blood and then some: Micro-single (six seconds!) "Cheney," with its rousing, one-time-only chorus of "Stop being a dick!" nailed both global realpolitik and the State of the Union in less time than it takes to buckshot a face off with a single-finger trigger-slip, while ESP's Tom and Alex White and Tenderfooter Marc Beatty fell in love with a girl, 'cause she was so pretty, swathed in skin-tight blacker-than-devil's-food guitars and a palpable sense of tomfoolery done by talented men. Comma, comma – full stop, exclamation point!