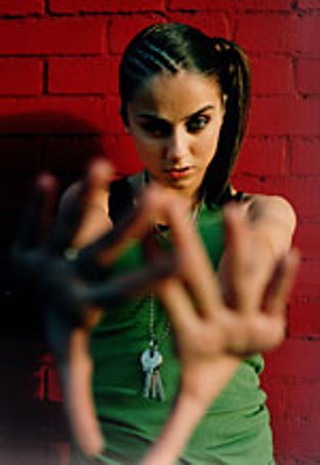 "Apparently I'm all the things a rapper shouldn't be," says the diminutive, 19-year-old Londoner. "I hope people can look past that."

It appears people already have. In hip-hop circles both here and overseas, Lady Sovereign's wears the universal next-big-thing seal of approval. Not only does she possess underground cred built on a series of widely bootlegged singles and EPs, she's got a brand new record deal stateside inked personally by Jay-Z.

"I flew in to meet him and he asked me to rhyme for him on the spot," she says of her NYC audition for Island Def Jam's president, who didn't just sign her; he promised to send her to the studio with Missy Elliot and the Neptunes. "He's a legend, and I'm just a cheeky li'l midget, right? I did it, but the whole time I'm standing there spitting I was fighting off a weird combination of disbelief, happiness, and nerves. I was pretty overwhelmed."

It's not hard to guess that what got Jay-Z's attention: on last year's Vertically Challenged EP there are tough-as-nail battle raps, complex storylines, and danceclub-ready bangers that suggest British grime and American crunk may be less distant cousins than was previously thought. Then there's her flow – hyper, slang-heavy, and boasty. It's easy to believe the bulk of Streets and Eminem comparisons she's earned are based more on agility than skin color.

"There's people that are going to see me and think I'm a novelty, that I'll have a few hits and piss off," says Sovereign, who'll play her first-ever SXSW well in advance of a late-summer debut LP. "But hip-hop is me. Music is me. I'm real. I'm the little girl with a big voice."