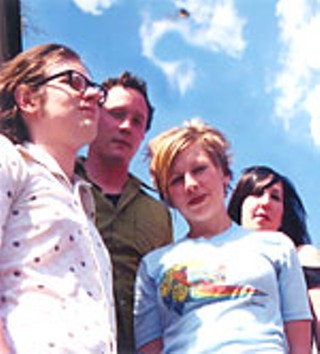 Garage quartet the Clutters' debut T&C, released last year on Austin's Chicken Ranch Records, ultimately rattled all the way up the music-critic food chain when it landed in the CD player of Rolling Stone sensei David Fricke. The esteemed music scholar praised the hypertensive LP's "loose notion of place and time, with a push and punch back-dated to Fifties Memphis and Hamburg's Star Club in the mid-Sixties" in the magazine's Feb. 6 issue.

"It was pretty cool," confesses singer/guitarist Doug Lehmann from his Nashville home. "We're not the size band that gets reviewed in Rolling Stone at all."

Not that other people haven't noticed the 4-year-old group. Their MySpace page touts the Clutters' selection by hometown weekly Nashville Scene as the "10th Most Attractive Nashville Indie Band." Tongue-in-cheek or not, Lehmann says he aspires to be included in such company.

"That's kind of the whole thing with us in general," he says. "I want to be in a pretentious indie-rock band, but I can't play that well."

Lehmann and the rest of his bandmates – bassist Jake Rosswog, Farfisa mistress Ali Tonn, and drummer Steph Filippini – play well enough. While never departing from the garage ethos of juiced-up tempos and raggedy moods, T&C also sizzles with the punk-jolted energy of bands that convinced high school classmates Lehmann and Rosswog to start their own: the Makers, the Mummies, and Memphis' Oblivians. Unable to tour regularly because of various day jobs, the Clutters don't muck about onstage. Their manic energy and obvious chemistry, which lands them shows with the likes of the Detroit Cobras, has other rewards than just a good way to earn gas money.

"I don't exercise very much," says Lehmann. "I look at it like, that's the only time I ever move, so you've gotta make it good."