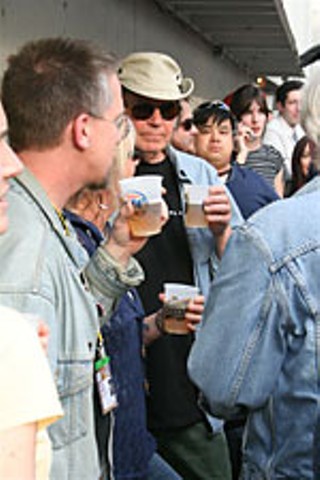 Today was the day to gad about on South Congress, so it was off to Yard Dog for the Schubas party, which never disappoints. This year's treat was the Minneapolis quartet Tapes 'n Tapes, who were refreshingly smiley and goofy, which is to be expected from a slightly punky band that features a rock baritone. It's discoveries like this, of a band that still has to rely on their day jobs to fuel the dream, that remind us what this festival is all about, as opposed to hoping for a star-sighting. That said, yours truly spent a lot of time craning the ole neck in hopes of substantiating a Neko Case-in-the-house rumor. No such luck.

We went to Güero's for lunch, hungry for star sightings. It's no fair that others have seen Frodo skulking around and all we've gotten is a lousy glimpse of the Whigs while we waited for our taco plates. Where's Charlize Theron and her 24-person entourage? Hell, at this point, I'd settle for Ray Romano – any port in a star-fucking storm.

I was surprised there weren't more people on hand for Roky Erickson's Psychedelic Ice Cream Social at Threadgill's. There was a decent showing of dusty old freaks, the likes of whom have been creaking around A-town since yours truly was in diapers, but I was especially impressed by the number of twentysomething whippersnappers singing along to "Don't Shake Me Lucifer" and "Creature With the Atom Brain." Rolling Stone scribe David Fricke was there, performing an ecstatic white-boy boogie while good ole Roky banged out his greatest hits, sometimes a bit off-key, but powerful nonetheless.

A Convention of Ugly Dudes

Apparently, birds of a feather do flock together. The display of male unattractiveness at Eef Barzelay's (of Clem Snide) solo sojourn at Jovita's was staggering. No offense, Eef.

Cafe Caffeine, just off South First on Mary Street, plays host to SXSouthAustin, a four-day slate of live acts to benefit the National Abortion Rights League. Ironically, this is a great day party to take your kid. Other shops in the strip include Moxie and the Compound, where you can purchase locally made goods like hip, urban-cowboy duds à la Ramonster, by designer Kathie Sever. Sever's hubby, Matt the Electrician, performs on Sunday night. A visit to SXSouthAustin on Thursday afternoon was fairly tame, although fans of the Silos started to trickle in early to catch the 4pm set by the beloved Americana outfit.

I Eat Records and Austinist.com co-host a two-day party at the another local hang-out fave, Spider House (2908 Fruth, near the UT campus), on Friday and Saturday, featuring Canada's favorite gay choir, the Hidden Cameras; and inappropriate punkers Fluffers Union. Maybe not one for the kids. Catch Orange Mother Ethan Azarian on Saturday, as well as Austin's up-and-coming the Glass Family.

Too Sexy for This Picture

Aha! A stop at Jo's Hot Coffee for a pick-me-up yielded the most interesting catch of the day: Gogol Bordello's Eugene Hutz, who agreed to be photographed less than graciously. The word "fuck" uttered in a thick Russian accent? Hot. Maybe he's just steamed because he's been caught wearing purple gym shorts over black pants. Yowza. Chances are slim he'll return for Jo's Parking Lot Party today, featuring local luminaries such as singer-songwriter Kacy Crowley and country papa Billy Joe Shaver, as well as Houston's favorite cover band, the Allen Oldies Band, but at least we put it out there.

Three Drinks to Rev You Up, Not Slow You Down

Feeling a bit limp? Have a go at these signature drinks at these coffeeshops-cum-day venues:

• Iced Turbo at Jo's. A little espresso, some chocolate and hazelnut, and sweetened condensed milk all conspire to give you that Saturday-morning cartoon high. Pajamas not included.

•Spider Bite at Spider House. Espresso plus drip coffee = bitter, but so, so sweet.